The connection between the built and the unbuilt / between the “indoor” and the “outdoor”/ between the mass and the void is a very sensitive and debatable topic.

Porosity is one of the many guiding factors in designing a space, specially public places, which are the key strategic spaces in providing the area/city its character.

Not only does careful design of such spaces increase the aesthetic quality of the place, but also plays a major role in increasing the standards of functionality, safety, quality and many such factors under which a city can be categorised. Porosity, is one spatial quality that can definitely benefit the public spaces, specially in places like Delhi, where the individual is getting isolated from the community in his efforts to cope up with the pace of life that the city has to offer.

Also, with the increasing gap between the two extreme income groups of the city, the spaces, which are meant to be ‘public’, cater only to a certain section of the society, neglecting those which fail to fulfil the ‘entrant requirements’ .

Apart from giving spaces back to all the sections of the society, increasing porosity in community spaces can also act as a measure against increasing crime rates in the city, as it opens up the space to a larger section of the society.

Research Question: How can porosity in public spaces be increased to enhance their utility for the society in general ?

Public spaces are an inevitable component of human settlements. Parks, plazas, roads, beaches, etc are typically considered public spaces. They are the common ground for people to interact with others, share knowledge or goods, or carry out their daily rituals, be it daily routine or occasional festivities. By definition, they are spaces that should be accessible to all the members of the society, irrespective of their economic strength.

It was stated that: 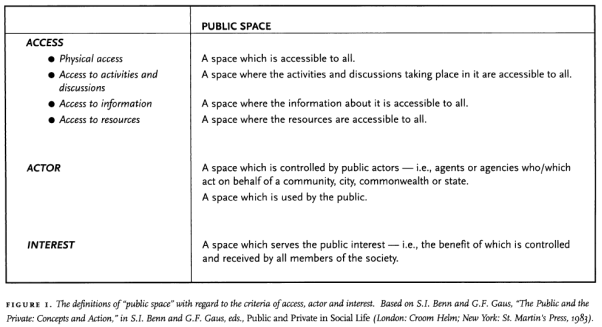 Of course, these definitions refer to an ideal public space, while the urban atmosphere is not entirely composed of rigidly public and private spaces; instead, it is an amalgamation of public and private spaces with different degrees of publicness. Accepting that the relation between public and private space is a continuum, it is possible to define public spaces as having various degrees of publicness. Regarding the dimensions of access, actor and interest, the extent of publicness will depend on three categories: the degree to which the public space and its resources, as well as the activities occurring in it and information about it, are available to all; the degree to which it is managed and controlled by public actors and used by the public; and the degree to which it serves the public interest.

Life in public spaces, not only has a function in the society as a whole, but it is also a rich source of individual amusement, pleasure and play. One criticism of the prevailing socio-functional approach towards urban public space can be that the individual’s perspective is often disregarded. To what extent do city dwellers like to meet other urbanites in public places? Hardly any planner, architect or urban administrator seems to be interested in that question. Planners and city councils are eager to speak about public spaces as meeting places. They find it an attractive idea to conceive of public spaces as a unifying element where all sectors of the urban population meet. With the help of that image they can present their cities as communities, despite all the contrasts and differences. Most social scientists dealing with urban public space also tend to regard processes that take place in the public realm as a contribution to the social organization, as a fulfilment of societal needs. This top-down-view, however, neglects the daily user’s perspective. Do city dwellers wish to get together with all their co-urbanites? Everybody who has ever been in a city knows the answer: no, certainly not with everyone. On the other hand, it cannot be denied that at least some individuals derive great pleasure from being in public.

Whether a space will function well depends on a range of aspects that include scale, use, safety and comfort, density and links. In many cases it is the individual’s experience of walking or dancing down a street, and the quality of environment, that is the most important element. Design then becomes about maximizing choice and trying to provide for different individuals’ goals.

Despite the resurgence of interest in public spaces, urban design and planning litera- ture has frequently hinted at the diminishing “publicness” of public spaces in modern cities. Some researchers have pointed out the threat of recent privatization policies, and claimed that public spaces, traditionally open to all segments of the population, are increasingly being developed and managed by private agencies to produce profit for the private sector and serve the interests of particular sections of the population (Punter, J 1990). Others have commented on the high degree of control now maintained over access and use of public spaces through surveillance cameras and other measures intended to improve their security (Reeve, A 1996). Still others have argued that contemporary public spaces increasingly serve a “homogenous” public and promote “social filtering.”

These open-access public spaces are precious because they enable city residents to move about and engage in recreation and face-to-face communication. But, because an open-access space is one everyone can enter, public spaces are classic sites for “tragedy,” to invoke Garrett Hardin’s famous metaphor for a commons (H, Garrrett 1968, cited Ellickson, R 1996)

A space that all can enter, however, is a space that each is tempted to abuse. Societies therefore impose rules-of-the-road for public spaces. While these rules are increasingly articulated in legal codes, most begin as informal norms of public etiquette (Taylor, R 1984, cited Ellickson, R 1996). Rules of proper street behaviour are not an impediment to freedom, but a foundation of it (Ellickson, R 1996)