A machine for living: Modernist Home designs between the wars

During the interwar period, Australian homes were greatly developing. This was demonstrated through the development of homes by architects such as Geoffrey Mewton, Arthur Baldwinson, Roy Grounds and many more. Architect Geoffrey Mewton was a well-known architect in Australian society and was one of the leading architects to progress the modern movement at the time. Mewton designed many infamous Australian designs like the single storey clinker brick house in Sandringham. Much similar to the Mewton, Arthur Baldwinson built two of Sydney’s first authentically modernist homes before 1939, which became significant in the development of modernist homes. Baldwinson was considered to be a central figure during the development of modernists homes in Australia not only for his practice but his role as an activist in different organisational groups. Roy Grounds was another well-known architect who was symbolic for his exploration of geometric shapes, the Henty House located in Frankston was circular, the Lyser House in Kew was an elevated triangle and the Roy Grounds House itself was square-shaped.

It was after WW1, that allowed Australian society to make progress and gain more hope and confidence in the country. Australia was faced with a large economic crisis after WW1, it was between 1914 and 1920 were Australia’s domestic product declined drastically. This then led to the development of homes in Australia. Due to the large economic crisis happening at the time, houses were built as single storeys – this design was common during the period. Majority of the houses during the interwar period were built upon large blocks and were built away from the streets. Homes would usually be built from materials such as timber or brick, meaning low-income families had more access to home like this, especially during such a profitable period. The style of these houses strongly reflected upon the movement towards modernism in Australia as well as the economic state during the interwar period.

Modernism during the interwar period as a movement can essentially be split into two concepts. One is the Art Deco style, whilst the other was a philosophical approach to design. Art Deco style was a movement in the decorative arts and architecture that came to be in the 1920s, it later becomes a more well-known style during the 1930s. Arthur Baldwinson, an architect who was well known for building two of Sydney’s first authentic modern homes before 1939, was featured in The 1939 Better Homes Exhibition. The exhibition explores the concept of homes using different materials and how they work in Australian society, it included plans and scaled models. Baldwinson designed a suburban house which demonstrated that modern style homes have been designed for materials such as timber, which is more affordable than materials like concrete or steel. This leads back to the idea of housing during the interwar period being designed and built for families with lower income. Presented behind the scaled model is a caption “well-designed houses are cheaper”, this again relates to the concept of timber wood and bricks being a more affordable material for building homes with. The Grounds House was an architectural significance during the mid 20th century, designed by Roy Grounds himself. Though being designed in 1952, the home itself was of much similar style to those homes during the interwar period. Shaped into a perfect square whilst including a nice rounded courtyard in the heart of the building, demonstrates the concept of geometrical design during this period. The Grounds House relates to houses built during the interwar period as it mimics the traditional style of a single storey home, built from affordable materials. The Grounds House was considered to be part of experimentation towards developing architecture in Australia. The use of geometrical shapes started to come into play, and architects were beginning to develop this idea more into their designs. Roy Grounds not only designed the Grounds House, but he also designed houses such as the Henty House which is located in Frankston and the Lyser House in Kew. Both these houses explored the ideation of geometrical shapes and were also symbolic of the movement of modernism in Australia. The development of homes in Australia was constantly changing, architects would explore with different materials and styles as time went on. A great example of the exploration of different materials can be The Glass House, designed by architect Hamlet Agabiti. The Glass House demonstrates the use of two significantly modern materials, glass bricks and bent glass. This house was the first Glass House to be designed in Australia and was playing an important part in the development of housing during the interwar period. The Glass House had been designed to be strictly functionally whilst maintaining limited decoration, this idea of homes being more functional than aesthetic was also something that played a major part in the development of modernist homes in Australia. Designers would create excitement and vibrancy in society by bringing in new materials for their designs. For example, the green tiles and Muntz brick walls featured in a low pitched roof house, the use of the vibrant and saturated colours reflected represented harmony and was of significance during the interwar period. 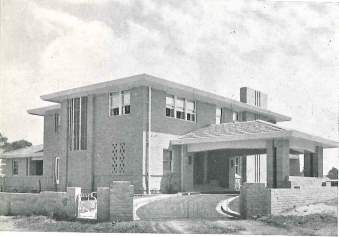 Australian architects towards the end of the interwar period wanted to pursue the idea of efficiency and beauty of the design. Geoffrey Mewtons and Roy Grounds worked together and designed two modern houses in suburban Melbourne areas. The building located in Upper Beaconsfield was a great example of a low-line environmental house, whilst the seaside cottage was built from steel and asbestos cement, both very different from each other. It was by the mid-1930s that concrete starting to become a more popular material in designing homes and were going up against materials such as brick. The seaside cottage, also referred to as The Ship, was designed in early 1933, is made up of modern materials, it then grew to be a significant economical creation in its time. The design of the taut skin on The Ship is an excellent example of Australian designers being influenced by an international style. 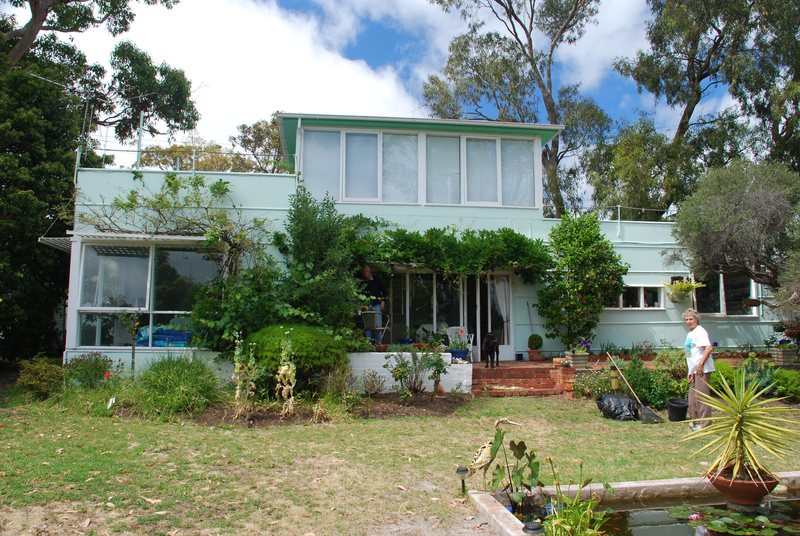 Concrete homes were beginning to become an experimental material during the mid-1930s, many houses were starting to incorporate this material instead of using timber and bricks. Leslie M. Perrott (1894-1975) was a well-known designer, specialising in concrete housing since the end of WW1. Perrott was strongly influenced by designs from America and Europe, in which he incorporated similar techniques into houses he had designed in Australia. Perrott designed a concrete residence location in East Camberwell, which became a significant building due to its thick reinforced concrete. The modern materials in Australia between 1919-1939 were considered to be glass, steel and reinforced concrete. The use of these materials, whether it be used on its own or even combined allows Australian designers and architectures to modernise homes even further. The concept of modernization had greatly developed over time, and in today’s society, it is clear to see how far we have come through the development of our homes. Materials like veneered wood, mineral alloys, artificial stone, asbestos and many more, are examples of how the materials that architects and designers have used have developed drastically overtime. 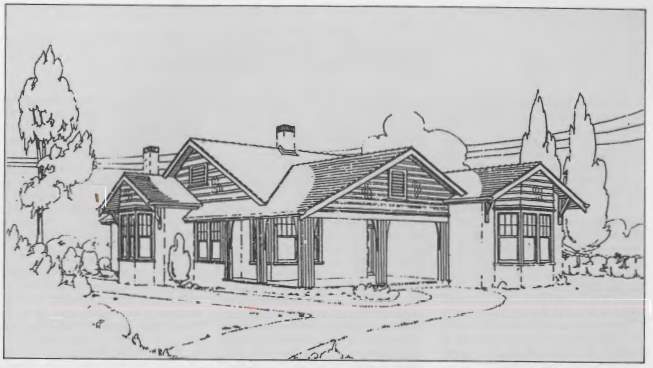 Living in the 21st century allows us to look back on the immense development of modernist homes and see how far we have come as a society. Society has played a major role in helping the growth and development of all these designs and it has been demonstrated through many architects and designers. The interwar period allowed Australian society to further explore different materials and techniques whilst still modernising its designs and architecture. At the beginning of the economic crisis, Australia began with using affordable and fundamental materials to go onto exploring with more complex and powerful materials. Single storey houses, much like the Grounds House have helped the development and lead to significant homes that are not only more functional but much more aesthetic, such as the Glass House or even The Ship.