The recognition of Christianity by Emperor Constantine in 313, the collapse of the Roman Empire in the West, and the Carolingian revolution were the milestones that marked the development of the European culture as we know it today.

In the period from the fourth century to the ninth century, on the turmoil of the time, a new tradition is created, reflexing the triumph of the Christian church and containing both Roman and local elements.

In the two sections of this essay two cases of architecture and two examples of objects of material culture will be described and compared to explain how European visual culture evolved in this period.

Besides the basilica, the Christian typologies of this period include the baptisteries, mausolea, martyria, and memorial churches to honour the saints and protect the relics.[1] [1]As examples, the church of Santa Costanza in Rome and the palace chapel at Aachen.

Santa Costanza was built as a  mausoleum for Constantina (d.354), the daughter of the emperor Constantine, on the site of a baptistery attached to the church of Sant’Agnese. The plan consists of three concentric circles: an arcade which defines the central space, an ambulatory limited by a thick outer wall, and an external circular portico that no longer exists. The central space is covered by a dome raised over a drum of arches, supported by twelve pairs of reused coupled columns,[2] and illuminated by sixteen clerestory windows. This central structure is reinforced by the annular barrel vault on the ambulatory, lit by small windows or oculus. The interior space is decorated with mosaics in the vaults and exedras while the exterior is austere with a masonry made of apparent brick.

The essential geometry of the space on a vertical axis creates a slight tension linking the body of the Princess[3] to heaven. The static harmony of the circle of the twelve columns[2] contrasts with the longitudinal movement of the outer circle.

Despite being close to the Roman model, the mausoleum has a juxtaposition of Christian and classical imagery[4]. There is a reference to the Cross in the plan, the arches on the four cardinal points correspond to the apses on the ambulatory wall, where the magnificent Roman porphyry sarcophagus of Constantia was placed[5]. Also, the decoration has both Christian and pagan motifs: the sacred iconography of Traditio Legis and Traditio Clavis in the apses; the late imperial naturalistic motifs and the geometric repetitive patterns in the ambulatory vaults as a sort of “carpet-like quality”.[6] The palace chapel at Aachen was part of the Emperor Charlemagne palace complex and was consecrated in 805 by Pope Leo III. Used for royal worship and later for a burial place, the two-storey plan comprises a domed central space, defined by eight massive columns and superimposed arches. This octagonal area is surrounded by a sixteen-sided ambulatory and upper gallery both covered by vaults. The west entrance with bronze doors, opposite the east apse, leads to the upper gallery where the imperial throne is placed. The decoration of the interior had coloured marbles from Rome and Ravenna which covered the walls, floors and piers; mosaics were on the dome, aisle and the gallery vaults. Some of these rich elements and the local bronze artwork remain together with the restored decoration. In contrast, the exterior is simple though has some elements that provide variety such as the round-arched windows on the corresponding levels of the ambulatory and gallery, the cornice on the outer wall and the pilasters with Corinthian capitals in the drum of the dome.[7]

The interior atmosphere is mystic, in part for the diffuse light and the religious iconography like the dome decorated with a scene of the Apocalypse’s twenty-four elders adoring the “Lamb of God”, but especially for the predominant vertical impression generated for the high and heavy central structure linking the emperor with his people through God.[8]

As a symbol of the restoration of the Roman Empire, the Aachen chapel respire Romanitas through its materials, architectonic vocabulary and volumetric composition even frequently compared to San Vitale at Ravenna (c.546-8) for the Byzantine elements employed.[9] But there is not only transferred traditions but innovations as the impressive arched entrance with bronze doors placed in a towered volume, the so-called westwork.[10]. This element provided a powerful accent to the composition instead using a low narthex, revelling “the experimental nature of Charlemagne’s chapel”.[11]

On comparing the two described cases, both are the product of the social desire to preserve the memory of influential people. These buildings connect to the divine through their centralized space and religious symbols, from the pervasive classic motifs in the sober mausoleum to the Christian images in the sumptuous imperial chapel. The spatial composition is similar, contrasting the outer and inner circles of the plan and creating tension between the central space and the dome[12] but, while in the first space is clear and understandable, in the second is more complex. The exterior volume is simple in both cases, but while in Santa Costanza it goes unnoticed, in the Palatine chapel it is notorious thanks to the towered main façade. 4 (and 5). Aachen Palace Chapel. Façade with the westwork, completed 805.   5. https://commons.wikimedia.org/wiki/File:Aachen_Cathedral.jpg 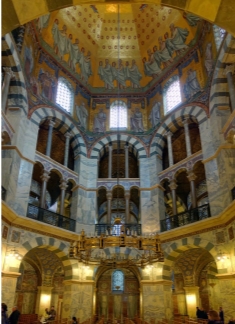 In a period when the Christian Church was a predominant provider of material culture, religious objects have an important significance. For instance, the silver jug of the Water Newton hoard[13]from the fourth centuryand the Saint-Maurice d’Agaune ewer from the eight century and later.

The Romano-British silver jug is twenty centimetres in height and eleven centimetres in diameter with a low relief of classic motifs like acanthus leaves and flowers.[14] Those style of jugs is typical of the late-Roman period as in the mosaics of Constantina’s mausoleum described above. The carafe could have been used in Christian worship to contain water or wine. Silver, a valuable material of the late Roman aristocracy, was adopted for the Church as a sign of its increasing power.

The Carolingian ewer is thirty centimetres in height and eleven centimetres in diameter. The vessel for serving wine has a decoration of winged gryphons and lions, a common royal emblem, on two cloisonné enamel plates. The legend says that the luxury object was a gift from the Caliph of Baghdad to the emperor Charlemagne, even though this exchanges among kings were frequent, it is probably that the enamels could be byzantine but placed by a Carolingian goldsmith.[15]

The formal differences and similarities between these vessels emerge from the description sufficiently. The significative is that while the chosen objects belonged to a powerful Christian Empire court or a Roman province Christian Church, both contain the visual language of the workshop of their time, but the most important, they represent the two institutions that ruled the world at the end of these five hundred years of cultural formation.

If Constantina’s mausoleum and the silver jug are leaving the Roman world to the Christian era, the Charlemagne’s Chapel and the enamel ewer are closing the process that consolidated the Church in West Europe and the establishment of the European courts. Omitting the period between those two extremes, the simplified so-called Dark Ages, spectacular achievement in tower building and vault construction, development of native art, increasing of skilled craftsmen, refinement of Christian worship and architecture, auspices of the courts without forgetting the contact with Byzantium, all these created the primary European visual culture, a visual society where representative buildings, both secular and religious imagery and performances had a predominant influence.