In 1949, partners Charles and Ray Eames designed and built the Eames House Case Study #8 to act as both their studio and home. Eames House Case Study #8 was constructed for a low-cost housing project named the Arts & Architecture magazine’s Case Study House program, a low-cost housing project. The multipotentialite partners fulfilled a kaleidoscopic creative endeavor exploring multiple fields such as architecture, furniture design and painting.  The “Californian Modernism” movement was built in California, most prominently in Los Angeles from the 1930s to the 1960s. Distinctive aspects of this movement were dominant implementation of glass, rectilinear architecture erected with steel framework, open plans, and much thought into connecting the outside with indoor living spaces. This essay will explore how unlike other European minimalist modern architecture, a minimalist conception can successfully create warm living environments through the composition of texture, colour and a multitude of household furnishings. An analysis will arise through the philosophy of architecture, Charles and Ray Eames unique design process and comparison of the works of fellow Californian modernists.

UNIVERSALISING FROM THE SPECIFIC

Corresponding with the philosophy towards the guest/host relationship, the philosophy of universalising from the specific states there should be much involvement with searching for a generous range of needs within a space in the premature phases of the design process. This opens a universal space with a large variety of purposes allowing its inhabitants to become more indulged in its environment.

THE HONEST USE OF MATERIALS

The philosophy of the honest use of materials grants that the form for which a material is used should be influenced by its characteristics. This states that careful consideration should be placed on the properties of materials when choosing a design use. The Eames’s designs attempt to express materials in a way to display their genuine nature. For instance, a large majority of Eames furnishings were designed around the pliability of a broad variety of wood. The honest use of materials plays a large role in creating a homely living space; authenticity towards the true nature of materials helps create a stronger connection between inhabitants and space.

The Eames House Case Study #8 can be identified as “Mid-Century Modernism” also known as “California Modernism”. “Mid-Century Modernism” conflicted with the “social conscience” of the Bauhaus and embraced warmer, more liberating design which was more representative of the realities of salesmanship and commerce and closer with local character. As stated in the article “Mid-Century Modern”, “This style emphasized creating structures with ample windows and open floor-plans with the intention of opening up interior spaces and bringing the outdoors in. A warmth was emitted with the consideration of color, texture, and other materials utilized in the construction and expression of the Eames’ designs. Moreover, this design style illustrates the concept of “form follows function” both in materials and space planning, as there was an emphasis of addressing the needs of the average American family”.

What was different about the Eames approach to the role of the designer?

It is worth noting that the Eames success towards developing a warm living environment was dependent on his attitude towards the relationship between the host and their guests. Charles Eames sheds light on his opinion on this relationship in his text _, “that of a very good, thoughtful host, all of whose energy goes into trying to anticipate the needs of his guests.”

Another significant reason for the Eames success is the way they approached a project, “design is a process, rather than a single outcome – a process that’s never really over.” Charles and Ray were tagged with the “Learn-By-Doing-Process” which essentially looked at every project as a learning process, and that a single project will be the birth of a new project. It was this iterative form of design which paved the way for the refining and modification of pre-existing designs to achieve a better and more improved version of what a designer wants to design. Much of the Eames work involved experimentation with different forms and materials and their respective functions, and when tasks arose that demanded new skills, the couple would “rather learn how to do it themselves than send it out” (Ray and Charles Eames, 2011).

The purpose of the Eames House was to create a space for the couple to work, live and entertain whilst simultaneously being in touch with its surrounding environment. This analysis will delve on the success of the exterior and interior in fulfilling the Eames purpose as well as explore the ways in which this minimalist design-build effort differed from traditional minimalism throughout European modernism.

Perhaps the most influential characteristic of the Eames minimalist design in creating a warm living space was developing relationship between the inside and out. From any angle, the Eames House boasts an inviting exterior as a result of attention to colour, extensive use of windows to not conceal its interior and rich landscaping surrounding the perimeter. A somewhat symbiotic relationship is illustrated as you view the Eames House from its exterior as the ornate interior doubles as exterior ornamentations as they extend past the large span of glass. The invitation of the outdoors into open interior spaces is characteristic of California Modernism which is achieved through steel frame and ample window space. 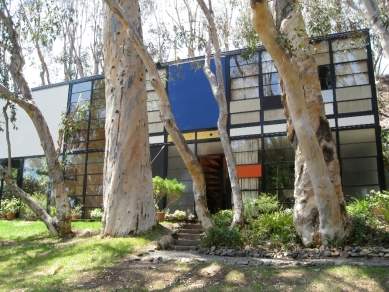 As represented by image_, the deliberate existence of primary colours on the façade helps in creating an inviting exterior. The prominence of large standing trees along the Eames House perimeter conjures a space that has evidently not compromised its local environment and rather embraces it.

Image_ is depictive of the philosophy of the honest use of materials. Charles and Ray Eames implement the full integrity of the materials which is most appreciable in the overhanging materials. It is made clear that the materials used in the construction are standardised, industrial products that were selected for characteristic properties and aesthetics. 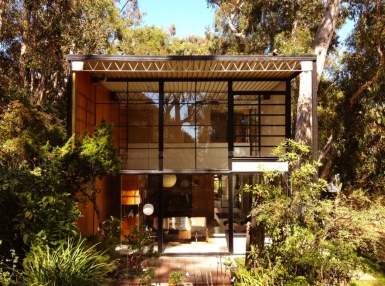 Like the exterior of the Eames House, its interior conveys some principles of traditional European Modernism. Most apparent, Charles and Ray Eames seemed to convey these traditional principles using white walls that lacked any form of ornamentation. Traditional minimalism would ask for a space to only contain necessities and objects that would contribute to the function of that space. However, the couple subverted these traditional modernist principles by developing a highly ornate interior to creating a warm living environment. These objects or ‘artifacts’ from previous projects, life experiences and travels helped create an inviting space. This was successful in softening the harsh rectilinear structure with warm, homely resonance. 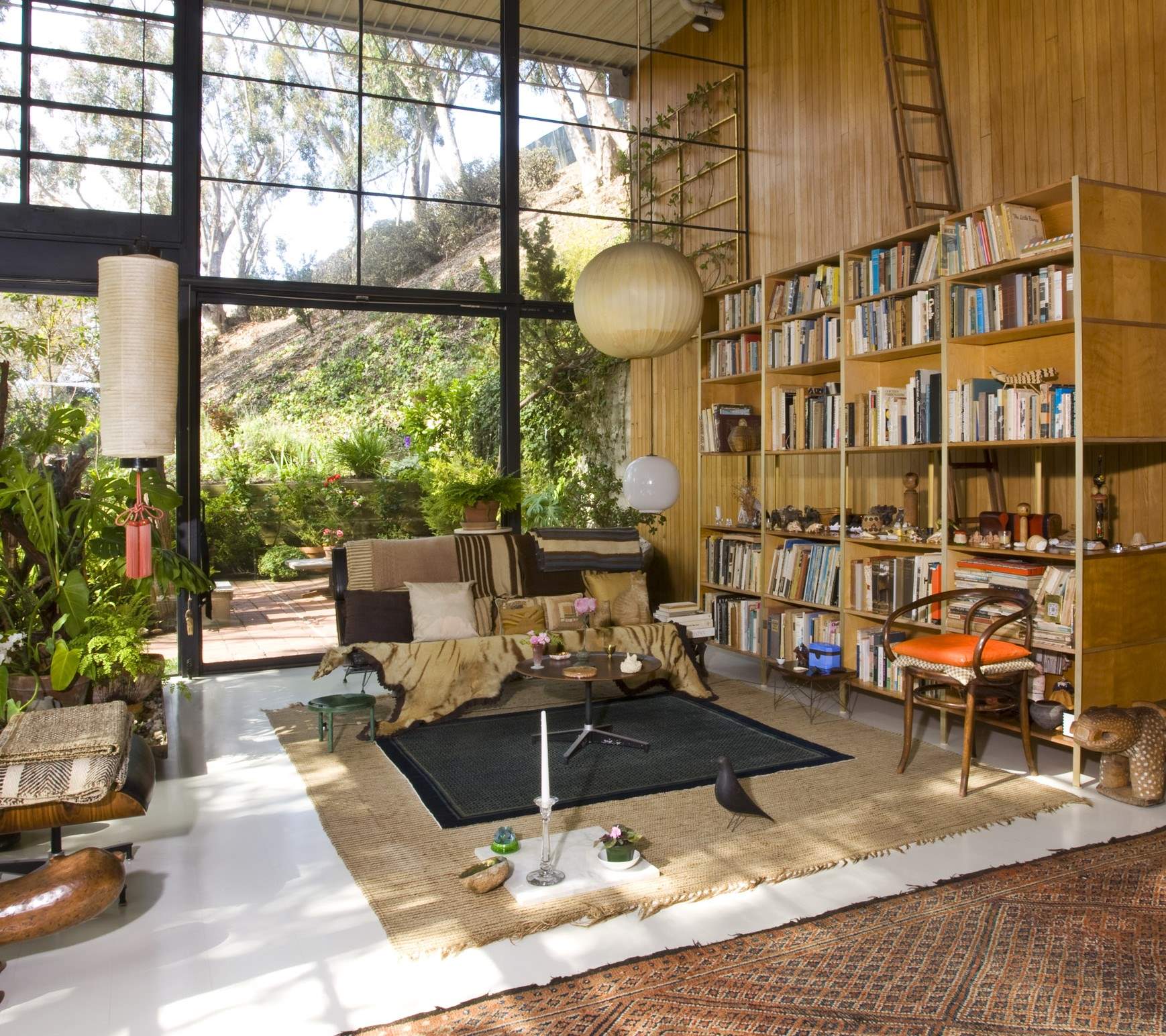 It is important to note how the Eames explored the philosophy on Universalising from the Specific as a space would entertain a range of different activities- functions of any purpose or capacity could be accommodated within this space. The eclectic design of the living room contained a multitude of various colours and textures. Furnishings, textured walls and floor finishing’sfde supplemented the ornamentation in providing additional warmth. The honest use of materials in respect to the furniture was subsequent of Charles and Ray Eames ‘Learn-By-Doing’ process which helped them incorporate materials in their truest nature allowing the inhabitants of the space to feel ‘more at home’.

Even though Charles and Ray Eames Case Study #8 House conceived many traditional minimalist principles, they proved that minimalist architecture, when done right, can conjure a warm household environment when careful attention is placed on texture, colour, and ornamentation.