This essay discusses the inherently rich means of describing and thinking about architecture seen in Gadamer’s notion of interplay and Frampton’s notion of critical religionism, comparing them briefly to a formalist way of characterising architecture.

The phrase ‘critical regionalism’ is not proposed to express the vernacular as this once naturally formed by the combined interaction of climate, culture, myth and craft. Rather, the phrase is used to identify architecture that primarily aims to reflect and serve the limited constituencies in which they are grounded. Among other factors contributing to the development of regionalism of this order is not only a certain property but also kind of anti-centrist accord – an inspiration at least to several arrangement of economic, cultural and political independence.

Over the past two centuries and a half, regionalism has dominated architecture in almost every country. By definition, it can be said that it endorses the distinctive and local architectonic qualities in contradiction of further universal and abstract ones. However, it can be argued that regionalism signifies ambiguity. This is due to the fact that it has been correlated with the developments of liberation and reform. Conversely, it has also been proven to be an influential tool of repression and nationalism. Undoubtedly, there are limitations when it comes to critical regionalism. The commotion of the populist movement – an advanced form of regionalism – has exposed its restraints. The probability of new architecture surfacing is very low when it is deprived of new kinds of relations between the designer and client without a new variety of programs. Notwithstanding these boundaries, critical regionalism is a bridge over which any humanistic architecture of the future has to surpass.

Twentieth century German philosopher, Hans-Greog Gadamer’s notion of interplay has been significantly influential to architecture. He also had a vast role in regards to aesthetics, specifically ‘the concept of play’. In accordance to Gadamer’s belief, he states that the concept of play is not a derivative from the subjective meaning which is believed by philosophers such as Immanuel Kant and Schiller. This is because for them it governs the entirety of modern aesthetics and the philosophy of man, along with the ethics involved. If we were to discuss in regards to the experience of art, we state play, which refers to neither the approach or the thinking of the designer or of those observing the art. It also doesn’t refer to the autonomy of subjectivity articulated in play. But rather, it refers to the mode of existence of the work of art itself.

If one were to explore aesthetic awareness, they will be able to acknowledge that the theory of aesthetic awareness opposed with an object doesn’t correspond to the existent situation. That is the reason as to why the concept of play is very significant to Gadamer’s theory. For architects, Gadamer’s thinking allows countless possibilities for understanding how structures nowadays can be rich with humanistic meaning, connecting to architecture’s history in conducts that don’t just repeat nor repudiate that history.

This can be expressed using Le Corbusier’s chapel Notre Dame du Haut at Ronchamp, France (1950-1955). This structure has captured a considerable amount of remarkable complexity of various historical constructions. The forthcoming observer of this structure is aesthetically encouraged to explore the multitude of façade arrangements. A reputable collection of texture of the structure, along with the light and shadow creating remarkable silhouettes, continuously holds the observer’s attentiveness before they enter the structure, where a new unit of forms and spaces await them. 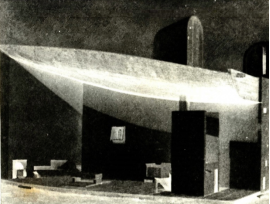 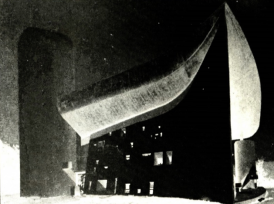 Formalism is an indistinct term that can be interpreted into several different things in architecture. Typically, it is corresponding to its most commonly acknowledged meaning, something negative. For example, this could be a particularly necessary element being absent in a work of architecture, such as the meaning, purpose etc. it was articulated in Judith Wolin’s words as the lack of “social responsibility, emotional content, or originality”.

The notion of regionalism in architecture endorses to create a robust sense of place for developing countries and could demonstrate vital in moulding their social structure, economic stability and environment consciousness. Kenneth Frampton propositions a theory that can direct to form an enhanced correlation to place whilst conforming with contemporary necessities. Frampton’s theory of critical regionalism was put forth in “Towards a Critical Regionalism: Six Points for an Architecture of Resistance” (Frampton 1983) and then reviewed again in “Ten Points on Architecture of Regionalism: A Provisional Polemic” (Frampton 1987).

Frampton bases his thinking on, French philosopher, Paul Ricoeur’s essay “Universal Civilisations and National Cultures” (Ricoeur 1961) to construct his argument. Ricoeur believed that the universalisation of human culture has become unavoidable around the world, and along with the increase of one-world civilisation derives the decreasing of diversity and loss of native traditional cultures that he believed to be the artistic core for expressing place. This occurrence becomes further substantial in developing countries, as their want for a more developed environment demands a subtle balance between being rooted to place and the capability to contribute in modern civilisation. The imposition of universal culture is inevitable. Conversely, weakening and almost completely terminating the relations to the cultural past (Frampton 1992, p.314). For both Kenneth Frampton and Paul Ricoeur, in order for architecture to preserve its social value, the developed environment built has to strive to reserve the importance of the past, but also be in accordance with the demands of the future.

According to Frampton, his critical regionalism isn’t equal to vernacular architecture. He believed that early and modern cultures aren’t the result of a sole heritage, but rather they are hybrids of numerous cultures discovered in a region’s past. Consequently, regional culture should be appreciated as instinctively enforced by place but somewhat, nurtured and demonstrated through the developed environment. It is because of this that Frampton believes that the Ricoeur indicates that “regional or national cultures today must be locally inflected manifestations of world culture” (Frampton 1992, p.315).

It is important to Frampton that there is an emphasis on an architectural language that revitalises indigenous results, whilst also reinstating the technological capabilities of modernism. For Frampton, this metaphorical statement of the past revived through the use of modern methods and indigenous material has been accomplished by numerous architects.

To exemplify critical regionalism, Frampton uses the work of Tadao Ando. He claims that the architect employs modernistic methods and language in order to demonstrate regional diversity and distinctive lifestyles (Frampton 1992, p.324). Frampton clarifies that Ando’s recurrent delamination of space through concrete walls. While it may be geometrically ingenuous and abstract, it suggests certain conservational and cultural qualities, which postulates a familiarity and distinctiveness to buildings. 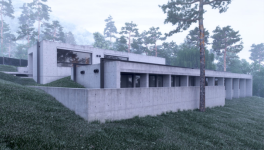 Ando presents his work using the surface of concrete instead of its mass. This is to accentuate spatial elements in accurately detailed symmetrical arrangements, which demonstrates intense shadows and light off the exteriors to enhance the experience of place. Ando defends this further and also describes his Koshino House (Frampton 1992, p.325): 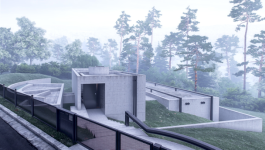 “light changes expressions with time, I believe that the architectural materials do not end with wood and concrete that have tangible forms but go beyond to include light and wind with appeals to the senses…details exist as the most important element in expressing identity…thus to me, the detail is an element which achieves the physical composition of architecture, but at the same time is a generator of an image of architecture.”

Tadao Ando’s work postulates framework of references which creates a parallel between forming relations to cultural tradition and regional aspects in harmony alongside the present universalised civilisation. In acknowledgement of this, it could be said that Frampton’s critical regionalism is not a style, rather, it’s a process of adaptation. An analytical classification that allows us to establish collective qualities and elements, through distinctive fundamental arrangements, developing a contemporary architectural language. This all leads to the reinforcement of regional individuality and forests a link between place and culture.

In conclusion, formalism in architecture cannot be interpreted as one genealogical line, despite observed conventional formalist traditions. It makes more sense to evaluate it as a hybrid that was strongly influenced by such traditions, but rather it is tied down to its own established tradition. Furthermore, Frampton’s theory on regionalism argues that architecture should not be taken for granted as a structural accomplishment that allows a profounder mindfulness of place. This demonstrates the opportunity to reflect culture in a contemporary, without depriving its existing individuality and cultural tradition. That is the fundamental core significance of critical regionalism.