In this essay, I will be looking thoroughly into Alvaro Siza's projects, who became a well know Modernist architect during the 20th century in Europe. I will be discussing the range of influences that Alvaro Siza had studied and how they had influenced his projects. I will also complement this with a reflection on how Alvaro Siza's work engages with the surrounding.

Alvaro Siza, was a Portuguese born architect, who is considered one of Portugal's greatest modernist architects. His works are internationally known for their clarity and simplism, as Oriol Bohigas stated, "Siza's work is always based on unity of space and volume an absolute coherence of function and form." Alvaro Siza is known for his wide range of influences of Modernist architecture, during Alvaro Siza's studies, he travelled around the world to study the Modern Architecture of the early generation which include Le Corbusier who at the time was one of the most successful Modernist architects, Alvar Alto, Adolf Loos and the Brazilians were also major influences. Alvaro Siza thoroughly studied the wide range of materials that the architects had used and studied the various forms and structures which later influenced his own projects. Although Siza has no particular style, his works are visually beautiful. His designs are all very different, as they all come from the site they are situated in which ensures a very distinctive style each time. 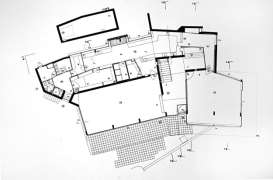 In many of Alvaro Siza projects, you can see the connection between Siza and Alvar Aalto which was also a successful Finnish Modernist architect. Alvar Aalto and Alvaro Siza both link their projects with the nature and in some sought, harmonize the landscape. They both look for a balanced connection between man's interventions with the existing nature which is what dominates in their design processes and works. Their design processes begin by examining the site which formulate their ideas. Boa Nova Teahouse (Figure 1 & 2), is one of Siza's earliest projects which was constructed in 1964, sits on the edge of a rocky environment looking out into the Atlantic Sea. The tea house was influenced by Alvar Aalto's project, with its organic form and the strong relationship with the topography of the surroundings. 'Free and natural way it becomes part of the landscape' (Siza, 1964) The Teahouse was widely influenced by Aalto's Villa Mairea (Figure 3) which was constructed in 1940, who also focused on the topography of the nearby forest to determine the design. Siza took major influence from the range of materials that Alvar Aalto used to construct the Villa, concrete that was later painted white is seen in both projects as well as the use of wood in the exterior. When studying both of the projects, you can see the major commonalities throughout the projects and the colours are also very similar. 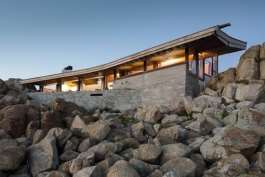 Adolf Loos was also a major influence on Alvaro Siza, Adolf Loos was an Austrian and Czech architect who was widely known in Europe for his many Modern design theories. Most of his projects consist of plain white cube shaped massing houses, with plain white façade with rich materials. Although the exterior is very plain, Loos ensures the interior is the complete opposite and creates elegant marble interiors which is also referenced in Siza's works. One of the projects where it is evident that Siza had taken much influence from Adolf Loos' work was the large-scale project, Malagueira housing (Figure 4) which was constructed from 1977-1997 on the outskirts of Evora near Lisbon. The Malaguiera housing are white cube shaped which develop the geometry and repetition of the housing but still obtains a wide range of architectural diversity. They are completely plain and lack decoration of any sort. These characteristics are very common in Adolf Loos' Moissi House (Figure 5), constructed in 1922, with the form being a plain white cube shaped house with a very balanced arrangement of the windows and no decorations throughout the building. Another building where there is clear influence of Adolf Loos in Siza's projects, is the Avelino Duarte House, situated in Ovar and completed in 1985. The Duarte House is again, a white cube shaped building, with equally proportioned windows and no other decoration, it is a very simplistic design for the exterior, however the interior is very elegant, containing marble walls and surfaces. This project was particularly influenced bt Adolf Loos' Steiner House, which is also a white exterior with marble interior. 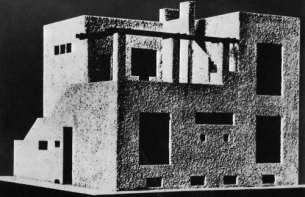 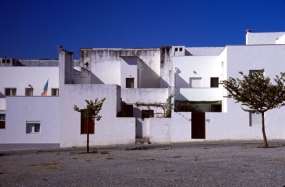 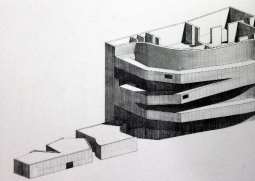 Alvaro Siza seeked reference from Le Corbusier who is a Modernist architect of French and Swiss descent who at the time of Siza's studies, was one of the most well-known and successful, early Modernist architect in Europe. Le Corbusier is a rationalist, which means he looks for naturalness through formulating a design theory which leads him to his final ideas. 'painting, architecture, sculpture are a unique phenomena of plastic nature in the service of poetic research' (Corbusier, 1953) Although Siza and Le Corbusier produced their projects in complete different design processes, Siza managed to study Le Corbusier's projects and contextualise them in his own designs. Le Corbusier works mainly with elemental geometric forms and chiefly constructed his buildings using steel and reinforced concrete. In Alvaro Siza's project which is called Iberê Camargo (Figure 6 & 7) situated in Porto Alegre, Brazil and constructed in 2000 is an obvious comparison to Le Corbusier. The building was designed using geometric triangular shapes and constructed with reinforced white concrete which can be seen on the exterior façade. The Ibere Camargo Gallery is similar to Le Corbusier's Gymnasium in Baghdad (Figure 8) which has a very rich expressiveness of reinforced concrete and geometric shapes seen throughout the entire building. 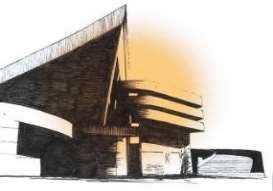 Siza has a very interesting way of designing his projects which ensures he never fails to attract the attention of visitors. The starting point for his design process is found in the site that the project is situated in but this is faced with an a priori theory, the project is emphasised either through thorough examination of the nature surrounding the site, seeking a similar proportion and simplicity of the nature, or it is found in the man-made work that is already in the surrounding. Alvaro Siza's designs complement and enhance the surrounding by the simplicity of the designs, which also contrast with the nature by otherness which is also complemented sometimes in the form of the design through the use of geometric shapes in the plans. Although Siza tries to soften this alterity and contrast between man-made and nature, by adding in plants and trees that grow across the buildings.

Overall, Alvaro Siza has a unique and fascinating way of designing architecture. His wide knowledge of Modernist architects made an enormous impact on his designs which could be seen in many projects stated above. His interaction with nature makes his architecture influential and have a clarity to them.