Issues surrounding the interpretation of the hominin remains and associated cultural evidence from Liang Bua cave on the island of Flores, Indonesia 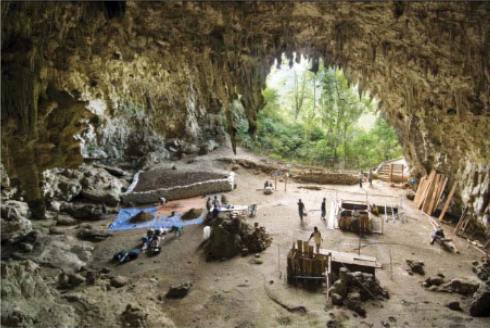 Homo Floresiensis has been identified as a bipedal homo species, standing at 1.06 meters with an endocranial volume of 380 cm³ and found alongside advanced microblade tools (Jacob et al. 2006). Initial dating of the skeletal remains, together with remains of extinct taxa found within the same stratigraphy, provided dates of habitation from 65 to 89 kya (thousand years before present) and 86.9 to 71.5 kya (Argue et al. 2017). However, since the initial finding and publication of skeleton LB1 there has been considerable debate surrounding the interpretation thereof.

In 2005 further excavation was conducted at Liang Bua, additional skeletal remains of LB1 and nine individuals were unearthed, alongside Stegodon taxa and stone tools, dated to 95-74 kyr (Morwood et al. 2005). The uppermost excavated deposit of 3.7m revealed remains of Homo Sapiens from the Holocene period, however, all remains uncovered within the Pleistocene stratigraphy were attributed to those of Homo Floresiensis (Morwood et al. 2005). In figure 3, nine unearthed individuals’ skeletal remains can be seen, however, none were as complete as the Holotype LB1. High densities of stone cores, flaking debris, retouched tools, anvils, evidence of fire and faunal remains were discovered indicating that Homo Floresiensis were capable of tool making, complex behaviours and cognition, however no pigment or symbolic items were found (Morwood et al. 2005). The adult mandible of LB6, (Figure 3), closely resembles that of LB1, however, LB6’s remains were dated to 3kyr younger than that of LB1 (Morwood et al. 2005). Morwood et al. (2005) argue these similarities and dates provide evidence that LB1 and LB6 are representatives of a small-bodied homo population upon Flores, whose features had never been recorded within the homo genus before. 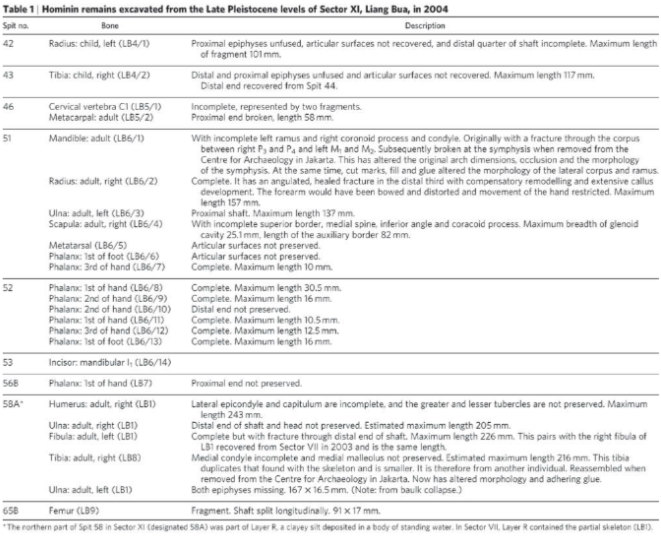 In the five years following Morwood and Brown’s initial publication of LB1, numerous arguments were published for and against a pathological explanation for LB1’s height, cranial capacity and features. Indrati (2007) noted that scientists with a broad background in modern human variation were prone to favouring the argument for a pathological variation, whereas, those within the field of palaeoanthropology favoured the ‘new species’ hypothesis.

After conducting their own reanalysis Jacob et al. (2006) concluded that LB1 was not a new species but rather an ancestor of the native Rampasasa Pygmies who now inhabit the island, albeit with developmental abnormalities, including microcephaly. With the use of CT scans, analysis of the cranium and facial features, particularly the mandible, Jacob et al. (2006) argued that LB1 had features common within 93.4 % of the current living population of Rampasasa pygmies living nearby Liang Bua Cave. LB1’s right humerus provides possible evidence of abnormal traits, the thickness in comparison to length could infer robustness, however, upon closer analysis, according to Jacob et al (2006) there is evidence of weak muscle attachment together with evidence provided by CT scans which revealed thin cortical bone with large marrow cavities. They continue to highlight evidence of abnormalities in the form of asymmetry evident within the patella and facial features (Jacob et al. 2006). Nevertheless, it should be noted that Jacob et al. (2006) began analysis on the remains of LB1 with the bias that they were that of a pathological human, and others of similar bias were invited to join in conducting this analysis (Aiello, 2010). Further tensions arose when the remains were not only returned late but damaged (Aiello, 2010).

Falk et al. (2009) argue against the hypothesis of Hershkovitz et al. (2007), that of the ten key defining features assessed in patients with Laron Syndrome, LB1 shares few if any of these features. Furthermore, it is concluded that LB1 shares none of the additional features mentioned by Hershkovitz et al. (2007) such as cranial facial asymmetry, cranial bone thickness, clavicular size and shape along with numerous others (Falk et al. 2009).  Falk et al. (2009) agree that only the short stature and nondiagnostic angles of the femur are similar between the patients and LB1. However, they argue that current pathological arguments against LB1 being a smaller bodied member of the homo species do not provide adequate evidence or explanation and although open to other pathological interpretations lean towards Homo Floresiensis being a newly discovered Hominin species (Flak et al. 2009). Nevertheless, Falk et al. (2009) use endocasts, measurements and findings of others studies of LB1 and patients with Laron Syndrome to build their hypothesis.

Figure 4 Table used by Hershkovitz et al. (2007) for their comparison between LB1 and the fifteen patients with Laron Syndrome.

Stone tools found in the Stoa basin at sites Liang Bua, Mata Menge, Boa Lesla and Kobatuwa, were discovered alongside fossilized remains of Stegodon Floresnsis, Komodo Dragon, rat and other taxa (Brumm et al. 2006). Many of these sites have been dated between 840-700 kyr, of which Mata Menge holds the largest with over 570 stone tool artefacts (Figure 5), these include small-medium size flakes from cobble and flake blanks (Brumm et al. 2006). The tools were found alongside raw materials of volcanic/metovolcanic and fluvial cobbles which were obtained locally and made up 91% of the artefacts (Brumm et al. 2006). Brumm et al. (2006, 2010) highlight similarities between the tools found at both Mata Menge and Liang Bua even though they are separated by 700 kyr, these similarities include the same raw materials and emphasis of freehand reduction of cores, one difference is the discovery of heat fractured artefacts discovered only at Liang Bua. The stone tools found at Mata Menge have as yet not been associated with any skeletal remains, those found at Liang Bua cave were found alongside the nine individuals Morwood et al. (2005) discovered. Brumm et al. (2006) theorise that the similarities between the associated tools indicate a continuous technology created by the same hominin lineage. Brumm Et al. (2010) re-evaluate their argument stating that although there are some similarities between the tools found at Mata Menge and Liang Bua, there are noticeable differences. Evidence is provided in the form of technological variation more closely linked to modern humans, they conclude their analysis stating that further investigation is required to fully understand how, why and when this occurred (Brumm et al. 2010). 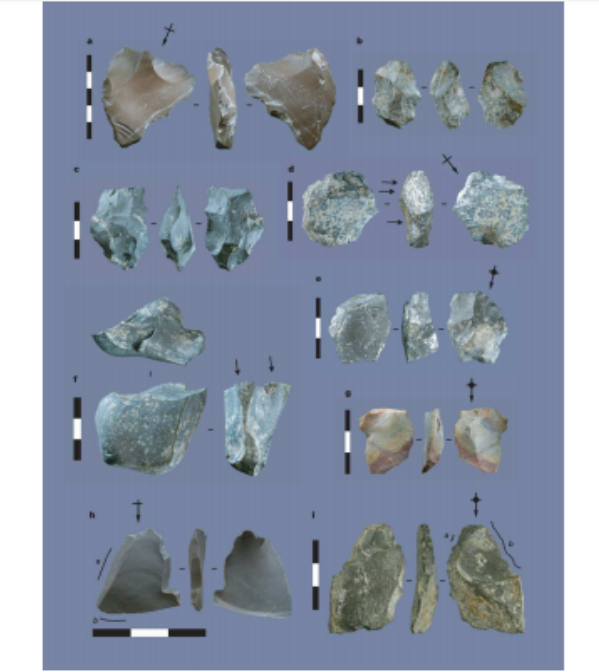 Further issues arise with the revision of stratigraphic dating and chronology of Liang Bua. Sutikna et al. (2016) argue that unlike previous dates, Electron Microprobe of volcanic glass, Direct AMS Radiocarbon dating of charcoal and many other forms of dating were used in order to obtain a more accurate date. Their findings indicated that Homo Floresiensis inhabited the Liang Bua from 100-60 kyr, they further argue that stone tools attributed to the species date from 190-50 kyr (Sutikna et al. 2016). However, Gagan et al. (2015) discovered a possible pit fall trap at the rear of Liang Bua cave, and 220 skeletal remains of giant rat, pigs, primates and other mammilla together with 17 stone tools were discovered within the Liang Bawah cave. These have been dated to 180 kyr and according to Gagan et al. (2015) may contain remains of Homo Floresiensis, however further excavation is required in order to confirm this hypothesis.

In 2016 an industrial co-led excavation by Gerrit Van den Bergh discovered a molar within a partial jaw and six teeth of an adult and two juvenile Hominin species dated to 700 kyr at Mata Menge (Callaway. 2016). The newly discovered remains are suggested by Van Den Bergh et al. (2016) to be derived from Australopithecus and Homo Habilis thereby supporting the theory that Homo Floresiensis is a dwarfed descendant of early Homo Erectus. The Mata Menge remains are estimated to be smaller than those of Homo Floresiensis and are suggested as being ancestors of Homo Floresiensis (Van de Bergh et al. 2016). Further finds of stone tools found in North Flores at Sulawesi indicating other possible sites were more fossils could be unearthed (Callaway. 2016).

Issues continue to surround the interpretation of the hominin remains and associated cultural evidence found at Liang Bua cave. Post excavation skeletal damage and varnishing have distorted LB1’s and LB6’s features and can inhibit further analysis and findings. Furthermore, the bias of original excavators and those conducting analysis of LB1 can and have impacted the arguments for and against the origins and genus of the hominin remains. A key issue surrounding the remains is, as yet, there has only been one partial holotype skeleton discovered alongside fragmented skeletal remains of other individuals and possible new ancestors at Mata Menge. These fragments, however, do not provide enough evidence that the Holotype LB1 is either a member of a smaller hominin species or an individual with abnormal traits and will continue to cause debate and contention until new skeletal remains are discovered.