This paper discusses the file-systems in the operating system. Earlier, the development of the filesystem in kernel space is very complicated. The researcher is trying hard to come up with a solution to this problem, and it leads to the rise of the development of file-systems in user-space. Also, it attracts a broad set of programmers or developers to develop their virtual file-system for their organizations or universities. In this paper, we explain the concept of FUSE and its internal architecture. Also, we discuss the integration of FUSE with the Two-Way Tree Algorithm. Finally, we have evaluated the performance of FUSE integrated with the Two-Way Tree Algorithm.

In the past years, file-systems [1] have been developed in kernel space. It is clear that the development of file-systems in kernel space is a rigorous process and a complicated process due to a variety of reasons. Furthermore, this requires a programmer to have an excellent knowledge of kernel programming, which is a low-level language and takes plenty of time to learn. Also, it involves a programmer to have a good understanding of kernel libraries and modules. For a programmer, there is a steep learning curve in this case. Currently, there is a lack of availability of developer tools for development of file-systems in kernel space. It would make life harder for a programmer to debug a kernel code. If there is a bug in kernel code, rebooting the system is required. When it comes to testing the kernel code, high efforts of testing is needed. In the case of writing kernel code, it should write in C without any helper libraries. For the development of file-systems in kernel space, the line of code would be in the range of 9000 - 32000. It takes plenty of years to develop bug-free kernel code. When the user wants to mount kernel filesystems, the user should have a special privilege, called as superuser root. It is arduous for a user who wants to port their developed file-system to another flavor of *NIX operating system because it requires many changes in the design and implementation of their developed file-systems. Examples of kernel file systems are ext2, ext3, ReiserFS, Reiser4, Btrfs, XFS.

FUSE: FUSE [6] [7] is short form of File System in USErspace. It is an open-source software interface that allows non-privilege users to create virtual file-system in user-space. It is widely used to create a file-system. For the development of file-system in user-space, no knowledge of internal of file-system or kernel module programming is required. Also, the programmer can customize to create the way they create the file-system. FUSE has a set of APIs operation that allows users to implement them based on their requirements. FUSE is available for *NIX operating systems such as Linux, FreeBSD, OpenBSD, NetBSD, OpenSolaris, Minix 3, and macOS. FUSE is available in many languages such as C, C++, Python, Java, etc. Due to excellent availability, it attracts a broad set of programmers to involve the development of file-systems in user-space.

In this section, we are going to study the internal architecture of FUSE [2]. When you install FUSE [8] on your machine, the diagram is shown as in Figure 1. Fig. 1. Line of code for development of file-system

The Virtual File System (VFS) [9] is the top-level of file-system and provides an abstraction within the kernel. As a result, it allows the implementation of different file-system to coexist with each other. In other words, it also interacts with the kernel as well as a user-space file-system. Similarly, Virtual File System (VFS) is a standard protocol for accessing the file by the client application for viewing the content in a file. In this Figure, it is shown that FUSE has two-part in the kernel as well as the userspace file-system. FUSE in kernel space called as FUSE driver acts as a proxy. FUSE in the user-space file-system consists of glibc and libfuse.

Output after mounted file is shown as below:

There at least 30 API provided by FUSE for various operations on the file in the mounted directory. We are going to study few of FUSE API's to get a big picture of FUSE in this project:

flush(self, path): When the user closes an opened file under the mounted directory, then this function flush will be called.

release(self, path): After the opened file is closed and is no longer referenced in the future under the mounted directory, then this function release will be called.

unlink(self, path): Under the mount directory, a user wants to remove a file using rm -rf filename.txt, this function unlink will be called.

open(self, path, flags): Under the mount directory, a user wants to open a file using vi filename.txt, and this function will be called to check if write permission has been set. If write permission is not assigned, the user is not allowed to modify a file but can view the content of a file.

read(self, path, size, offset): Under the mount directory, a user wants to read a file using cat filename.txt, and this function will be called to check whether read permission has been provided. If read permission is not provided, the user will get a warning error. Otherwise, the user can view the content of the file.

For better understanding, Figure 2 are shown:

Fig. 2. API called when operation is performed on mounted directory

In the above figure, in the first example, if a user wants to execute cat /ritCS/text1.txt, where ritCS is a mounted directory in FUSE and text1.txt is a file. It will call API calls getattr(), open(), read() and release() in order and in sequential since it is processed in queue. Unlike kernel code, a few lines of code are written. In this project, Two-Way Tree Algorithm from a previous student have implemented in Java. Following the documentation given by a previous student, it is implemented successfully. Since FUSE is available in many language, in first five week, I started installing FUSE in C, but there was an socket issue between C and Java. The issue was it did not return a call from C to Java. To further analyze issue, I tried to debug, but no avail. I further investigated if an issue observed in another language. I have installed FUSE in Python [8] and found no issue. I have implemented seven API for file operation in FUSE.

A socket connection is established between FUSE and Two-Way Tree Algorithm for file in the mounted directory. A socket connection is established in some of API for file operation. All files fetched from the Two-Way Tree Algorithm are in read permission. The user can see the content of the file from the remote directory after it is mounted on a local machine. Snapshot for file operation in FUSE given as below:

In above figure 4, you notice the date is 31 Dec 1969. The date can be defined using API setattr(), where it is not implemented in my project. Test2, Hello-World and FUSE are files which are present in Two-Way Tree Algorithm.

In this figure 5, the umount is performed and you see that all files under mounted directory is not longer seen and it is detached. Fig. 5. Unmount Directory, which is already mounted on local machine 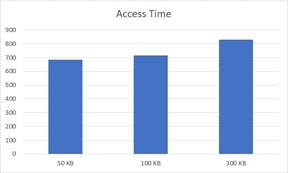 My project is far from completion because additional features are still required. Some of the things I would like to see in the future work are given below:

1. To transfer files between two ends: FUSEand Two Way Algorithm, and it consumes high bandwidth on the network due to large data in a file. The compression and decompression of each file should be carried out to reduce the bandwidth.

2. The real-time file system should be supported.Any change at one end should reflect the same at the other end. In order to achieve this, it should be carried out in a multi-threading process.

3. In this project, only files are showing in amounted file. Directory and sub-files should be included.