Disclaimer: This work has been submitted by a university student. This is not an example of the work produced by our Assignment Writing Service. You can view samples of our professional work here.

Ethics as the set of behaviours that we as a person, use every day. Each person is different from another, so what does it mean ethic in your personal and professional life? Nowadays, people have to behave according to the place they are living/working in. What is more, they need to identify which activities are correct and which actions are wrong. Ethics and morals can be assumed as the same concept.

Michael Boylan (2014). said in his book of “Business Ethics”  that sympathy, openness and cares is equal to love. People need to have coherence in their actions and sayings; it´s impossible to have ethic or moral if you don´t act the same way as you speak.

As the majority of the authors, mention in this essay, believe that ethics is similar to morals. However, ethics are different depending on the country and company.

It seems to be a lot of differences of culture and the perspective of the managers/leaders to look at the ethics in the workplace. It´s all about work-life balance but sometimes depend on of the countries people by their will they may work extra to have a decent life for their families. (Crane and Matten, 2016, p. 309)

Individuals must have a self-analysis to come up with a personal ethical model. The percentage of our daily decisions using ethical is minor, for example, if a person is shopping shoes and the decision is to pick black or white ones, it depends on the preference of the person and has nothing to do with being ethical or not. (Boylan, 2014)

All actions must be done with integrity. Be good with people, caring for others, no breaking the law, follow the rules, have good will. Persons have feelings they are more than just “rational machines” (Boylan, 2014)

“We began this book almost 20 years ago with the firm belief that business isn´t just better when companies and business people are ethical, but rather that good ethics is essential for effective business practice” (Trevino and Nelson, 2014, p. 3)

The bad apple theory says you must let go people who are “bad” for the company, someone who isn´t behaviour very ethic. However, is not the person (in most of the cases) who have to leave is about if the company must change the context rather than the person. (Trevino and Nelson, 2014)

For the most part, the person´s character is defined since the childhood, with family, in the school, in all kind of education have received along within life. Treviño and Nelson say “good intentions aren´t enough”, people need to understand and learn what some good behaviours and wrong are.

All decisions have consequences; these consequences can be bad or good personals and for the others. They can represent a risk in a person life. Although, it´s necessary  to do a self-evaluation, because some actions may seem not very ethic, but if there is a positive outcome (profits, good reputation with the boos) people can lose the ethical point of view and start to see it as a good action, but in a long-term can have a ruthless consequence for the individual, family or friends. (Trevino and Nelson, 2014, p. 89) (Crane and Matten, 2016, p. 7)

Ethics must be taught, with training from a company (for example) and addition the experience gives the most important lessons, the results of an action can be positive or negative.

At the same time, people have to be open to learning new things every day from family, co-workers, boss, among others. Consequently, people who follow this practice can become excellent leaders, how can identify good and bad behaviour, and transmit their beliefs to employees through training, talks, articles, etc. (Trevino and Nelson, 2014, p. 18)

The most significant example of showing lousy ethic´s practices is the big Enron ´failure, back in 2001, those behaviours will last forever in the business society as the most significant bankruptcy so far, those web of lies at the end got exposed, and even though so many families lost everything, the powerful ones got punishment. I this situation it’s clear the motivation of the owners of the company was MONEY. (Forbes, no date)

Due to, many companies do auditing in their businesses, makes it easier to measure the ethical culture in your organisation.  (Boylan, 2014, p. 156, p.193)

In all companies must be a “codes of ethics”, which is in simple words a set of morals rules, in this document must specify the behave that the employee has to show in each situation, which standards they have to follow according to the ethics of the company. (Crane and Matten, 2016, p. 183)

Human resources departments are trying to be more protective with the employee more than with the employer. The business world is attempting to be equal in all. For instance, when there is a job offer, the company need to hire the employee more qualified for the position, talking about their skills not based on their look, gender, age, and so on.(Boylan, 2014, p. 115)

As we know social networking, it´s vital because it can improve or ruin a reputation in minutes. For this reason, citizens need to behave always the best as their can because a reputation is forever. The status of a person can be used for success and satisfaction in personal and work life. (Trevino and Nelson, 2014, p. 23)

Generally speaking, ¿are women more carrying than men? Carol Gilligan talks about this topic in her book In a Different Voice (1982), some of her research shows that the women she speaks with used a care of ethics. She thinks carrying was not only development by women, however, was more common in women than men. 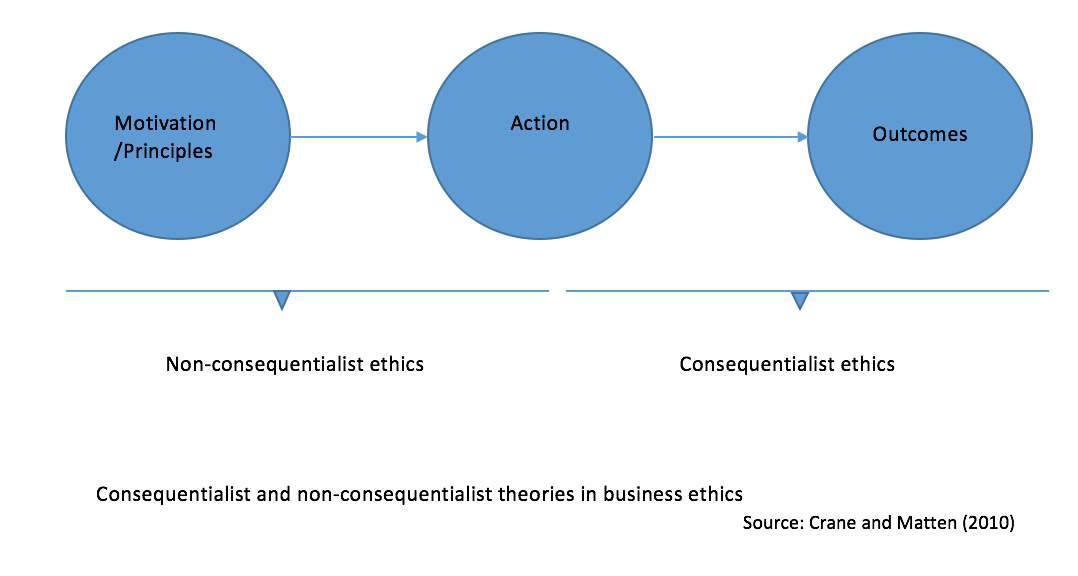 Non-consequentialist ethics: based on rules and something is already established, before knowing the outcomes.

Consequentialist ethics: based on the result of an action.

Like in all decision-making in a work environment, people need to follow steps (consent or un-consents), and for the ethical decision, must have a role model according to morals. This actions would help in jobs to take the best ethical choice. (Crane and Matten, 2016, p. 138)

Of course, as human beings with feelings, sometimes the ethical decisions are making “automatically”, It means with the first emotion (anger, happiness, sadness) and before taking any decision must be done a careful analysis, thinking about the consequences. (Boylan, 2014, p. 93,95)

Another example, In Mexico most of the people make their resumes with a picture, status and age, which is not necessary but the Mexicans know that even is not a requirement it´s essential to get a position.

Now we can talk about discrimination, which is a real problem at least in Mexico, most of the time in the most important companies it´s essential the way you look or the connections you have with the influential people in the organization than your qualifications, and then you can apply for a more significant position because your “golf friend” say something good about you with the “right” person.

The concept of CRS (Corporate Social Responsibility), favours the considerations that the organisations must have with their actions with all the stakeholders and of course the ecosystem. The factors of CRS are Legal, Ethical, Economic, and Discretion. This statement is significant for a company when they want to act under ethical for the society and themselves. (Kelly, 2009, p. 118)

It´s highly essential what to do, what to say, how do people behave in personal and professional life, considering that new generations want to be a strong leader and influencer with the best business ethical possible.

Sometimes, it can´t be a hundred percent agree with the “ethical code” in our company, but it´s important to remember these amazing thinkers from history:

“It is not the strongest of the species that survives, nor the most intelligent; it is the one most adaptable to change.”

“The measure of intelligence is the ability to change.”
― Albert Einstein, German Scientist.

According to World’s Most Ethical Companies® Honorees, some of the most ethical companies in 2017 are:  (Kauflin, no date)

Ethisphere since 2007 had privileged and recognised the companies who have a positive behaviour in their businesses and the society around the world, according to their impact of their actions in employees, investors, customers and in general all the stakeholders.

The methodology the organisation used was a series of multiple-choice questions that catch the companies’ data. (Ethisphere, no date)

If you are the original writer of this assignment and no longer wish to have your work published on the UKDiss.com website then please: