With the exponential rise in worldwide obesity rates, obesity is a non-communicable disease considered to be an epidemic cause of concern. Not only is this due to the physiological decline leading to premature mortality but also as a financial burden on society. Individuals meeting the cut-off point for obesity (BMI > 30 kg m-2) are reportedly at a higher risk of mortality or developing comorbidities than healthy-weight individuals. Accordingly, the role of exercise as a weight loss strategy must be examined.

To initiate a walking health route plan for a 2kg fat mass loss in an obese individual and to further investigate the efficiency of exercise (i.e. walking) as a role in weight loss.

Subject A, a male (age = 50 years, height = 1.77m, body mass = 96kg, body mass index (BMI) = 30.3kg/m2) was chosen as the target subject for a walking health route strategy to initiate a loss of 2kg of fat mass. Energy expenditure data was analysed using the subject’s known anthropometric data along with the calories expended and duration of the walk as tracked and calculated by the app MapMyWalk.

Subject A expended 379 Kcal (1585.74 kJ) as calculated by MapMyWalk for the designed health route walk. Subject A would have to repeat this health route walk approximately 49 times to lose 2kg of fat mass. In real time, this equates to performing 40 hours of this walk route for a 2kg fat mass loss. This is not a realistic approach to weight loss, especially in an obese individual already struggling to take up exercise. Thus, other methods that complement the walking health route must be considered for optimal weight loss.

With westernized lifestyles being adopted in developing countries and a growing obese population in the developed, obesity is now considered a worldwide epidemic. Obesity was officially recognised by the World Health Organization (WHO, 2013) as a non-communicable disease that requires an effective intervention if its rise is to be prevented. Moreover, obesity is also the source of other non-communicable diseases that burden society, both economically and health-wise (WHO, 2000). Prospective Studies Collaboration (2009) performed an analysis of numerous studies that observed the effect of BMI on the risk of mortality. Their findings showed that every 5 kg/m2 increase in BMI resulted in a 30% higher risk of mortality. Additionally, the study concluded that while other anthropometric measures are useful, BMI alone is strong enough as a predictor of obesity. Despite the growing uncertainty over using BMI as a valid indicator of obesity, there is no strong evidence yet encouraging the disuse of this anthropometric measurement (Bouchard, 2007).

The standard definition of obesity is a BMI of 30kg/m2 (Cole et al., 2000; James et al., 2001). If this epidemic rise remains unchanged, by 2025, more than 18% of men and 21% of women worldwide will officially be classified as obese (NCD Risk Factor Collaboration, 2016). NCD Risk Factor Collaboration (2016) further suggested that lowering global BMI numbers produces the largest health benefits. As recent research has indicated, the significant association between obesity and BMI is largely determined by adiposity. Malik, Willett and Hu (2013) stated that excessive adiposity is an important risk factor in the development of non-communicable diseases. Lowering BMI by targeting adiposity is the most commonly used method of intervention and this is often achieved through either an increase in energy expenditure, reduction in energy intake or a combination of both.

A cohort study performed by Padwal et al. (2016) observed residents in Canada above the age of 40 years from the first trial, where their anthropometric measurements were taken, up until deaths among the subjects were documented. This study found that the men in the highest body fat percentage quintile had the highest risk of mortality and that there was a direct association between body fat percentage and mortality; a higher body fat percentage resulted in a higher risk of mortality. Moreover, Padwal and his fellow researchers concluded that adiposity levels higher than a healthy value reduces chances of survival.

Obesity and a high BMI result in premature mortality mostly in due to the comorbidities that follow excess adiposity. A population-based cohort study by Reyes et al. (2016) found that being overweight or obese significantly increases the risk of hand, hip, and knee osteoarthritis and that these conditions increase in probability with increasing BMI. Both diabetes and hypertension are amplified in adult life by increases in BMI (James et al., 2001). A systematic analysis for the Global Burden of Disease Study by Feigin et al. (2016) reported that more than 90% of the global stroke burden is a result of modifiable risk factors such as a poor diet and physical inactivity. Feigin’s study concluded that regulating behavioural and metabolic risk factors such as physical activity and diet prevents more than three-quarters of the global stroke burden.

Chan et al. (1994) studied the risk of type II diabetes mellitus in men with obesity and high levels of adiposity. The study design recruited 51,529 U.S. men, all approximately 40 – 75 years of age in 1986, followed by a five-year follow-up on the same subjects. Non-communicable diseases such as diabetes have been long researched to understand its mechanisms. Various studies suggest that increased resistance to insulin and diminished expression of the GLUT4 glucose transporter are found in both obese and diabetic populations (Yang et al., 2005). Chan concluded from the results of the study that there is a strong positive relationship between obesity measured by BMI and risk of diabetes. Despite analysing the relationship between diabetes and other antecedents such as early obesity, waist circumference and childhood weight gain, the results determined that BMI was the leading risk factor for type II diabetes mellitus. Nevertheless, weight loss has been suggested as one of the few modifiable factors for reversing the metabolic effects of obesity and diabetes (Bassuk and Manson, 2005).

The aim of this report is to analyse the role of exercise as a health change behaviour of an obese middle-aged man to prevent the risk of obesity-related diseases and minimise the likelihood of premature mortality.

The health route designed for Subject A involved a 2.87 mile (m) walk at a speed of 16:52 minutes per mile (min/m), which equates to 3.75 mph miles per hour (mph). The walk included a maximum ascend of 327ft and an average heart rate of 144 beats per minute (bpm). The route involves Subject A to walk through a park and along an uphill footpath in a circle until the subject reaches the park once again. Figures 1, 2, and 3 present the body mass index calculation, the walk route, the data from the walk route and elevation from the walk route.

Heart rates were recorded at random throughout the walk: a graphical representation of the recorded heart rates at 7 random intervalscan be seen in figure 4. The changing terrain can be seen through the varying heart rates despite the route being a steady-state, sub-maximal exercise. The results section and the appendix present the detailed calculations surrounding the data collected for the subject. 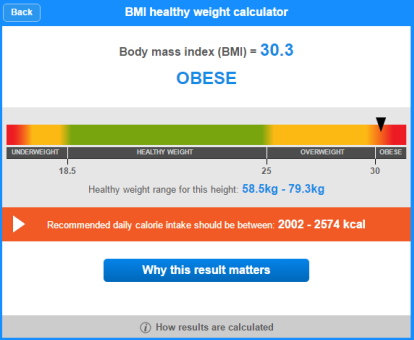 Figure 1 – BMI calculated and classified through the NHS website 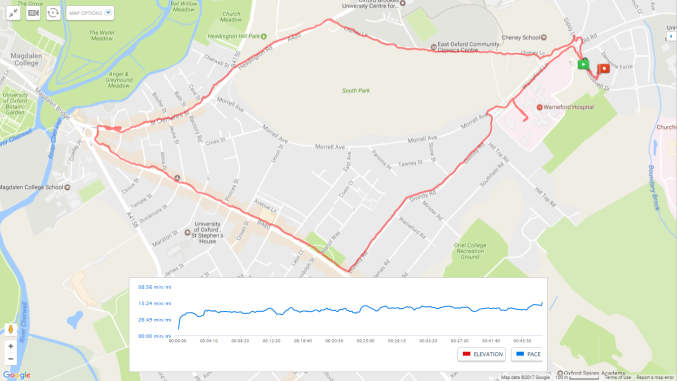 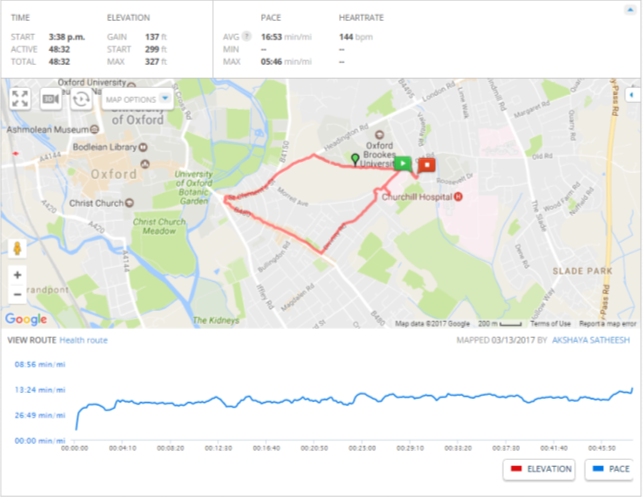 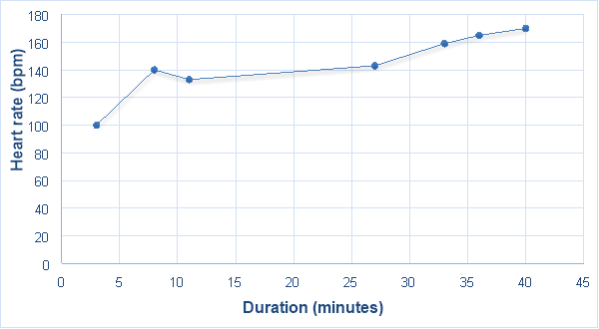 Subject A’s average heart rate was 144 bpm, putting him within the fat burning zone, which is optimal for the desired outcome. This equates to 84% of the subject’s maximum heart rate (170 bpm).

The results from this intervention suggest that Subject A must repeat this health route walk approximately 49 times to lose 2kg of fat mass, this equates to completing 40 hours of this walk route to initiate a 2kg fat mass loss. While completing the health route walk once is an appropriate duration of physical activity, the time needed to produce a reduction in weight loss of 2kg, and therefore a reduction in BMI value, is unrealistic and impractical.

Research surrounding physical activity suggests similar recommendations for tackling weight loss. McGuire et al. (1999) observed the behavioural techniques used by the U. S. adult population. The subjects were divided into three different categories; weight-loss maintainers: individuals who had intentionally lost â‰¥10% of their weight and maintained it for â‰¥1 year, weight-loss regainers: individuals who intentionally lost â‰¥10% of their weight but had not maintained it and a control group of individuals who had never lost â‰¥10% of their maximum weight and had maintained their current weight (Â±10 pounds) within the past 5 years. The results of the study showed that the weight-loss maintainer group consistently upheld their initial weight loss over a period of 7 years. In regards to their intervention, the weight-loss maintainer group incorporated a larger variety of techniques to regulate and self-monitor their lifestyle. The study concluded that adherence to a controlled dietary intake and increased physical activity contributed to weight loss and it’s maintenance.