Water analysis to determine the chemical composition within a section of the River Tees, and the difference between freshwater samples and Sea water.

Water is one of the most fundamental requirements for man’s existence on earth; it is required in so many functions such as for drinking, cooking agriculture and even transportation either biological, (blood) or non-biological such as cargo ships, (Hunt & Wilson, 2002).

Without water, life as we know it would simply cease to exist; Water is one of earth’s most renewable resources. As such, it is vital that water content is analysed to monitor toxic and non-toxic chemicals entering the water systems, monitor global anthropogenic impact, react rapidly to chemical contamination through accidents or industry, and to enable safe water systems for domestic and agricultural use. One such example of where water analysis has been instrumental is after the recent floods in the UK where overflow from sewers, rivers and run off from industrial sites has allowed chemicals to enter into water systems. Analysis of these systems allows for the damage to be assessed and necessary action to be taken, (Environment Agency, 2014).

“That there is a difference in chemical composition within water samples taken from three sites along the river Tees and a difference between freshwater and sea water”.

Water samples from the Durham University section of the River Tees were analysed using a mixture of both a hand held ultrameter (Myron) and a probe meter. A 10ml quantity of water from all the samples taken was placed in a test tube. A pH probe meter was inserted and the pH results recorded. Using the electronic hand held analyser, the samples were analysed by placing a small amount of the sample into the analysing cup attached to the device. The lid was replaced and the pH button pressed to start the analysis. The results were recorded as shown in table 1.

Water salinity was measured by using a hand held salinity meter with a salinity range of 0-100% (density 0.001sg). A small amount of the water sample was placed onto the deviation prism. The cover plate was closed and the instrument was held up to a light source (natural light) and the reading taken from the salinity gauge and recorded. The analysis was repeated for all the samples and the results were recorded as shown in table 2.

As per pH but using the Conductivity function on the Myron multi-meter. The analysis was repeated for all the samples and the results were recorded as shown in table 3.

As per pH but using the dissolved O2 function on the Myron multi-meter and the analysis was repeated for all the samples and the results were recorded as shown in table 4.

Nitrates in the water samples were reduced to nitrites using a zinc based reduction agent, (Nitratest powder and Nitratest tablet). The solutions were then transferred to a clean test tube where a re-agent was added, (Nitrocol tablet). The solutions were then analysed for nitrate levels using the Palintest 8000 photometer and the analysis was repeated for all the samples and the results were recorded as shown in table 5.

We tested the water samples using the indophenol method by the addition of chlorine and catalysts that react with ammonia to form a coloured solution, (Indophenol complex). fig1. Reagents in the form of tablets were then added and the sample solutions analysed using the palintest 8000. The analysis was repeated for all the samples and the results were recorded as shown in table 6.

Note: For the Sea water sample (Sample 1), Ammonia conditioning agent was added to prevent the precipitation of salts.

Fig 1. Water samples in Indophenol complex form prior to testing for Ammonia. 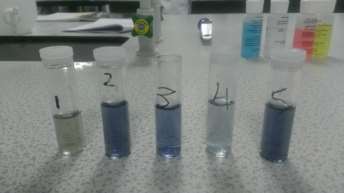 We tested for phosphates by reducing the samples by ascorbic acid as phosphates react under acidic conditions with ammonium. Catalysts were added to ensure a rapid colour movement as well as an inhibitor to deter any influence from silica present in the solution. Reagents were then added and a period of 10 minutes elapsed prior to placing the samples for analysis testing using the palintest 8000. The results were recorded as shown in table 7.

The pH values of both the fresh water and sea water samples analysed all fell within close proximity to each other and within the parameters of normal surface water of pH>6.5 – pH<8.5, (Environment Agency, 2014) as shown in table 1.

Table 1. pH values from water samples taken from the Durham University area of the River Tees and one sample of seawater.

Only one sample (Sea water) registered for salinity when tested. The Reference -Composition salinity (SR) was 30, (SCOR/IAPSO Working Group 127, 2008).

Table 2. Salinity values from water samples taken from the Durham University area of the River Tees and one sample of seawater.

Electrolyte conductivity recorded in the samples ranged from 8.4 S/m in the sea water sample and between 9.6-10.85 S/m in the freshwater samples. The Seawater sample was higher than the normal range of 5 S/m, and the fresh water samples were within normal parameters 5-55 S/m. (California State Water Resources Control Board, 2004). As shown in Table 3.

Table 3. Conductivity values from water samples taken from the Durham University area of the River Tees and one sample of seawater

Note: All samples were analysed in lab conditions at room temperature and as such are subject to the relevant physiological conditions such as pressure and temperature which should be considered, (Henry’s Law etc).

Table 4. Dissolved Oxygen values from water samples taken from the Durham University area of the River Tees and one sample of seawater.

Table 5. Nitrate values from water samples taken from the Durham University area of the River Tees and one sample of seawater.

Table 6. Phosphate values from water samples taken from the Durham University area of the River Tees and one sample of seawater.

The ocean contains approximately 97% of all the Earths’ water. (Hunt & Wilson, 2002). The ocean and fresh water although have similar properties such as the molecular structure H2O, the chemical properties can be quite different.

There are many factors that affect the chemical properties of both fresh and sea water, such as pollution, natural occurrences (e.g Algae blooms) and acid rain, and it is imperative that constant monitoring of our water systems is undertaken to be able to act proactively and swiftly to any changes. (Environment Agency, 2014). When considering the results of our analysis, we can see similarities on pH and dissolved oxygen, (Table 1 and table 4 respectively). Both these chemical properties give a clear indication as to the health of the water systems being analysed. A high pH in the seawater sample for example could suggest an increase in acidification, or pollution in the freshwater should a high pH have been found, especially in an area of high industrial manufacturing such as Stockton and Middlesbrough.

The most noticeable difference between the samples was the salinity of seawater against freshwater, (Table 2). As one would expect, seawater salinity is considerably higher due to the output of weathering of the Earth’s surface being transported into the oceans. This makes the ocean a different habitat than that of freshwater. Conductivity increases as salinity increases, however this was not found in our analysis. One possible reason could be the time that the sample took to be analysed and the sample temperature as these factors could have affected the results. (SCOR/IAPSO Working Group 127, 2008).

Nitrate content was lower in seawater. Nitrates are a naturally occurring compound in the water system whether fresh or sea water. However the slightly higher levels of nitrates shown in freshwater could indicate anthropogenic influences due to farming. (World Health Organisation, 2011) High Nitrate composition is also harmful to health as this could cause methemoglobinemia. Nitrates reduce the ability of blood cells carrying haemoglobin resulting in infant deaths. This would also add weight to the higher levels of Phosphates present as it has been suggested that Phosphate increases could be attributed to fertilizer usage and above the levels suggested as acceptable. (White & Hammond, 2006).

In Summary, the water chemical composition of both freshwater and seawater in general fall within normal expectations and are good indicators of the quality of the water system within an industrialised zone. The hypothesis that there is a chemical difference between the two sample types, freshwater and seawater was proven if only somewhat marginal. Further testing for different chemical composition could find a different result.

Chemical differences between saltwater and freshwater.

The major difference between fresh water and salt water is salinity. Freshwater has little or no salt content (<1%) whereas salt water has on average 35% dissolved salts. (SCOR/IAPSO Working Group 127, 2008). With this brings an array of chemical properties. The higher the salinity, the higher the density. This makes water less buoyant and increases viscosity. The freezing and melting points of seawater are different from fresh water. With the higher salinity of seawater, freezing points lower and boiling points increase along with an increase in conductivity. (Hunt & Wilson, 2002).

The chemical composition differences between seawater and freshwater can be outlined in order of abundance in table 8. (SCOR/IAPSO Working Group 127, 2008)

Table 8. Chemical composition of seawater and freshwater in order of abundance.

Dissolved Oxygen concentrations, (DO), in water is an important factor for all aquatic life. Should DO levels exceed 110%, it can become harmful to marine life and could case the blockage of gas exchange in what is known as “gas bubble disease”, whilst water that has a DO of less than 5mg/l or lower over a longer period of time can result in fish kills on a large scale and puts stress on all aquatic life. (Canadian Council of Ministers of the Environment, 1999).