Temporal variation in water column structure, transmissometry, and fluorometry in a macrotidal estuary

Estuaries are very diverse systems. This is due to the existence of very shallow waters, which in relation to other various factors, can potentially affect the temporal variation in water column structure, transmissometry and fluorometry. Perhaps, the most essential factor that must be taken into consideration in Southampton estuarine environment, on a daily basis, is the Spring – Neap tidal cycle.

Southampton Water forms the north-westerly extension of the Solent System on the south coast of England, and forms the estuary of three chalk-derived rivers: Test, Itchen and Hamble. The area has an unusual tidal pattern, where the interaction of the M4 and M6 tidal constituents (usually during a Spring tide) creates a double high water. This high water stand can last up to 3h, reducing the time for the ebb phase. This tidal asymmetry leads to 6h of moderate flood currents and 4h of rapid ebb velocities (1.5 m/sec). The flood phase has also a slack period (young flood stand), where the tidal currents become temporarily weaker. The foregoing factors generate stronger mixing during the ebb phase showing also an increase from a Neap to a Spring tide (Lauria et al., 1999).

The present survey aims to identify and clarify at the same time the patterns influencing physical and biological parameters and the processes linking these patterns in a macrotidal estuary, more specifically the Southampton Water estuary. Furthermore, these patterns must also be examined if they differ, during other tidal states and at different times of year.

The survey area was Southampton Water. A shallow, partially mixed coastal plain estuary. It is located on the south coast of England. Its length is 10 km and has a width of 2 km with a dredged central shipping channel of 15m below mean tide. It is essentially marine in character, with little variation in salinity number (~30) in the mouth. Stratification occurs mostly at the head of the estuary. Water temperature within Southampton Water varies according to the season, with minimum winter temperatures below 7° C and maximum summer temperature above 17° C. (Williams et al., 2006)

Sampling took place over an approximate 7 hour time period on the 10th of November 2016. The area was in a small radius of 0.5 nautical miles from the position 50° 52.259´ N and 001° 22.348´ E (data-buoy coordinates). During the day, a neap tide was occurring. The tide cycle involved two high-tides and one low-tide. First high tide took place at 07:57 local time (4.17 m) and the second one at 20:07 local time (4.08m). The low tide between them was at 12:37 (1.85m) (Southampton Tide Times internet site). Samples were collected using the research vessel Callista of the National Oceanographic Centre. The winds had a Northeast direction and varied from 10 to 20 knots speed. However, the sea state was around 3 (~0.5 m wave height) and the cloud coverage varied from 3 to 6 octal.

The survey plan that had to be followed was a continuous measurement (every half hour) from approximately 09:00 to 16:00 (local time), averaged in every meter of depth for later processing. Vertical profiles of conductivity (salinity), temperature, density, transmissometry and fluorescence were obtained using a CTD. On the CTD, a transmissometer and a fluorometer were mounted, along with the Niskin bottles for water sampling. Although there is not going to be an analytical description of their abilities and their ranges of measurement, a list of the devices that were used both on Callista and on the CTD is shown below:

Samples of water were collected with the Niskin bottles at two depths every one hour. The first one at 1m below sea surface and the second one around 2m above sea bed. These samples were obtained for further chlorophyll, phosphate and silica analysis. Chlorophyll-a was measured with the method of acetone extraction. Silica and phosphate concentrations were measured in the chemistry lab at the National Oceanographic Center, from the samples that were collected by the groups on the RIB. Current speed and direction could not be measured because the sensor was out of order.

Zooplankton measurements were made and samples were also collected. The first occurred at the beginning of the boat trip (from 09:37 to 09:43 local time) and the second one at the end of it (from 15:45 to 15:50 local time). Special zooplankton nets were used and the samples were kept in special chemical liquid (formaldehyde) for preserving, until it was processed.

In the morning, when the sampling begun, the tide height was decreasing until 12:37 (local time) to the height of 1.85m (ebb phase). After that, the tide height increased again until the end of the survey (flood phase) and headed to its second high tide for the day at 4.08m (20:07 local time). Despite the fact that there were no data obtained for the tide currents’ speed and their direction because of the non-functioning sensor, taking into consideration the Nautical Charts from the British Hydrographic Service for the specific area, we observe that tide currents have different directions during the day (tide cycle) and their velocity varies from 0.5 to 2 m/sec, approximately. In figure 1, the half-tide cycle of the day is demonstrated and also the Potential Energy Anomaly, derived from the different densities and energies at each depth, showing a value of average stratification for each station.

The water column demonstrated a temperature variation between +11.1 and +11.5 °C (fig. 2(a)). In the meantime, salinity values were measured between 33.0 and 34.0 units (fig. 2(b)). Temperature decreased with depth while salinity increased. The small range variation of the vertical temperature and salinity profiles, imply that the water column was partially mixed throughout the whole sampling time period. A small water mass with high salinity is observed at the depth of 6.5 m at 13:00 (local time) which is obviously a more saline, sea-water mass below the fresher river-water masses. The temperature distribution seems more homogeneous with depth. The two figures show a relative resemblance, as more saline water goes deeper. As a result, during the day hours, when the sun light still exists, the deeper we go in the water column, the colder it gets.

Chlorophyll fluorescence measurements were very low during the survey, demonstrating values between 0.55 and 1.15 approximately (fig. 3 (a)). A water mass of higher chlorophyll fluorescence was observed near the water surface around 13:30 (local time). However, chlorophyll did not demonstrate any essential changes, being almost homogeneous in relation to depth, which implies a well-mixed water column as well.

Light transmission measurements also showed a very well mixed water column. The measured values had a small range and demonstrated from 2.7 % to 3.15% maximum (fig. 3 (b)). In this figure, the vertical profile of the percentage of light that is transmitted is shown. The light transmission plot also agrees with the chlorophyll fluorescence plot. A small area of 2 meters depth (from 5 to 7 meters depth) was observed between 10:00 and 11:00 with the highest values of transmission (3,15%), but this was, possibly, a random phenomenon.

According to the measurements that were made and the width of change, no significant pattern of temperature change was observed in relation to depth. Southampton Water temperatures vary from a winter minimum of <7 °C (December-February) and a summer maximum >17° C (June-August) (Muxagata et al., 2004). Temperature homogeneity in relation to depth signifies that temperature is not playing any essential role in the estuary dynamics, nor the estuary water stratification. General speaking, temperature indeed enhances the growth of phytoplankton while in most temperate marine systems seasonal thermal stratification is the main factor that triggers the start of spring bloom. In the marine environment of Southampton, it seems that temperature is not the most important factor. (Iriarte et al., 2004).

Salinity did not play any significant role either. The range of values that were measured was really small. However, the contour of salinity in relation to depth implies a more stratified water column than that of the temperature. As a result, salinity is more important than temperature in affecting the estuarine stratification.

Chlorophyll concentrations did not demonstrate a big change either. The general measured values were very small (~0.5 to 1.1 Î¼g/l), which phenomenon agrees with the general rate of chlorophyll growth in Southampton Water during autumn. This fact can also be observed in figure (4), where the buoy data from February 2016 to October 2016 are shown. It can be clearly stated that the largest chlorophyll growth occurs in August, simply related to temperature and weather conditions (low winds-low seas states).

However, chlorophyll blooms which happen in spring and summer, coincide with the period of relatively low Spring tide, followed by a Neap tide. “The higher degree of stability in the water column allows growth to occur without the greater flushing that is experienced at Spring tide. The reestablishment of high Spring tides caused chlorophyll levels to fall as the estuary was flushed” (Wright et al., 1997). Moreover, phytoplankton populations can show changes from seasonal and inter-annual variations, but more extended variations occur during periods of low mixing on Neap tides (Lauria et al., 1999). The tide cycle in Spring and Neap tides is probably one of the most important factors in the phytoplankton growth.

As long as the pattern in Southampton Water is concerned, “the seasonal distribution of chlorophyll-a showed low winter values followed by a spring peak during the last week of April and intermediate concentrations during summer, dropping to pre-spring bloom levels by October” (Purdie et al., 2004).

The measurements with the Secchi disk and the transmissometer in the water implied the fact. That light did not play a key-role in the general growth of phytoplankton in the Southampton Water. Furthermore, figure 5 shows the turbidity (%) of the water during the day. Although the changes are very small, it can be observed that after 12:00 (local time), when the ebb phase of the tide cycle approaches and the mean water depth decreases, the values slightly increase. This also draws a conclusion that the light influence on the water column is mainly affected by the tidal cycle.

Although not shown in figures in this report, nutrient concentrations in the Southampton Water were mainly affected by the tidal cycle. All the measurements that were made during this survey supported the fact mentioned above. Silica and phosphate measurements showed that their behaviors were affected mainly by the tide cycle. In addition, special measurements also revealed that during the ebb phase, zooplankton was moved, probably with the water masses that the tide currents moved. This fact also resulted in a significant decrease in zooplankton numbers. The most abundant species were copepods (while all the other species had an almost null value), whose numbers indicated a decrease of around 30% after the ebb phase (zooplankton measurement No 2). 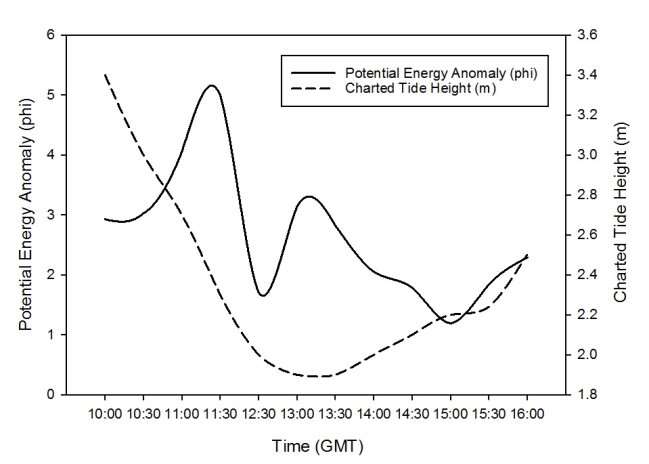 Figure 1: The Neap Tidal Pattern during the sampling period (10:00-16:00 local time-GMT) and the Potential Energy Anomaly 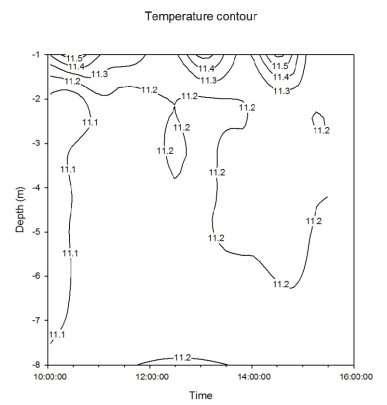 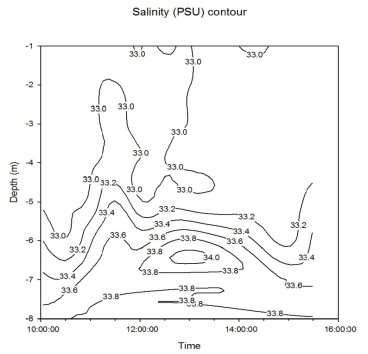 Figure 2 (a): Water temperature contour in relation to depth, during

(b): Water salinity contour in relation to depth, during 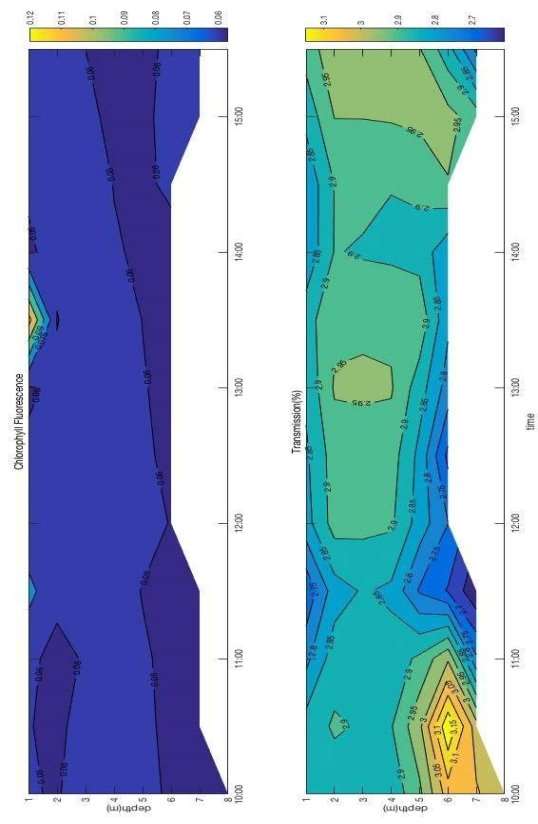 Figure (3) (a): Plot of Chlorophyll fluorescence in relation to depth, during the day

(b): Plot of Light Transmission in relation to depth, during the day 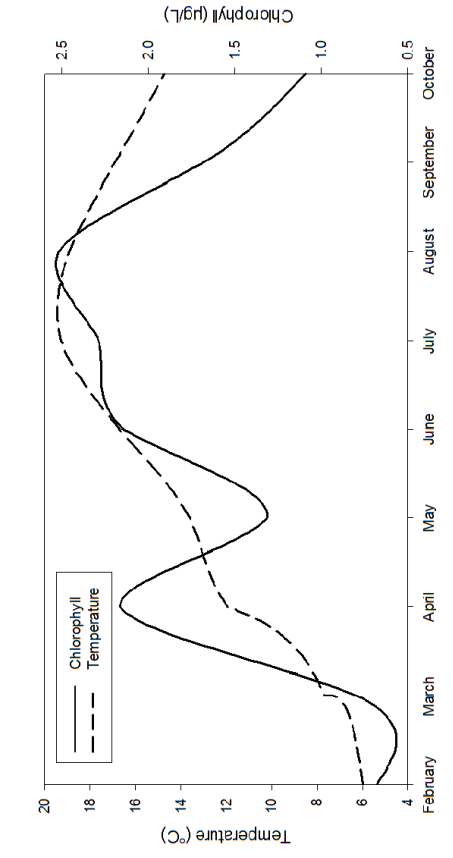 Figure (4): Chlorophyll concentration and water temperature in relation to time

Figure 5: Turbidity in relation to depth, during the day