Abstract– This paper serves as a survey on energy harvesting from different sources and their methods presented after a brief literature review of different technical papers available in the public domain. The Process of extracting energy from our surroundings is known as energy harvesting. The energy harvesting got its origins from the water wheels and windmills. Energy can be scavenged from sources around us like, light, water, wind, heat, radio waves, mechanical vibrations etc. In the present age we need more reliable, low cost and efficient power sources for our systems. The new systems require less energy and give out great output similarly the sources are supposed to be more efficient and effective, in this paper we have presented that how the energy which is presently wasted around us due to radiations, friction or reflection can be scavenged to make them useful of our everyday use.

Conventional batteries are not always beneficial as they require human involvement for replacing batteries. Hence, require electrical power to make these devices functional. Therefore, consideration of alternate type of energy source to traditional batteries is required. The electrical power is required to operate these devices can be obtained by converting the light, mechanical or thermal energies available in the ambient environment. This conversion of energy available in ambient environment can produce unlimited energy for the lifetime of the electronic device. This process of extracting energy from the ambient environment and converting them into consumable electric energy is known as Energy Harvesting. Typical energies available in ambient environment are mechanical energy, solar energy, RF energy and thermal energy. Since, it is proven to be an efficient alternative to give lifelong electrical power to electronic devices, there is an increasingly volume carried out on energy harvesting, these days [1-10, 22-28].

Energy harvesting sources can be utilized to maximize the ability and lifetime of the devices by augmenting the usage of battery [18-20]. Electrical devices switched on by energy harvesters can be utilized to give important information on structural and operational circumstances through positioning them in unapproachable whereabouts [21].

The categorization of energy harvesting can be done on the basis of the types of energy being used to harvest energy, available in ambient environment, into electrical energy. The different yet widely used sources for energy harvesting are photovoltaic cells, thermoelectric generators, wind turbines, and mechanical vibration devices such as electromagnetic devices and piezoelectric devices [11].

Table I highlights some of the energy harvesting sources with their power generation capability [12].

When a device vibrates, an inertial mass can be utilized to generate movement. This vibrational movement can then be converted into electrical energy using 3 mechanisms including piezoelectric, electrostatic and electromagnetic. Energy used here is mechanical energy.

This type of energy harvesting mainly depends on the varying capacitance of vibration-dependent varactors (variable capacitors). Vibration causes the separation between plates of an initially charged varactor, which causes mechanical energy to be converted in electrical energy. Electrostatic generators are simple mechanical devices that produce electricity by using manual or mechanical power [13].

These are the materials that convert mechanical energy, produced by applying force, pressure or vibrations, into electrical energy. These materials are able to generate electrical charge when mechanical load is applied on them. This property of piezoelectric materials is considered by the researchers to develop various piezoelectric harvesters in order to power different applications [14, 15].

The very first example of extracting electrical energy from piezoelectric materials is from the collision of leaving steel ball bearing on piezoelectric transducer [29].

Electromagnetic induction gives the benefit of better mechanical damping and reliability as there will not be any mechanical intercourse between any parts; therefore, no distinct voltage source is needed [30].

Photovoltaic cells are the devices that transform light energy into electrical energy. The form of energy harnessed is typically light energy usually received from sunlight. Usage of photovoltaic cells would be effective and efficient at places where the availability of light is guaranteed and usage of batteries and other means of power supply are not feasible or expensive.

While designing sources which harvest solar energy, constituents such as accessibility of day light, periods of smoggy cloud and snow cover, effects of operation at higher latitudes, functionalities of the photovoltaic cell used, the strength of the incident light, power supply needs are to be considered [9, 16].

Solid-state thermoelectric generators are considered to have long life, low maintenance and high reliability. However, their usage is limited because of their low energy conversion efficiency and high costs [17].

As we know that in today’s world, energy crisis is one of the biggest issues as the demand of energy is increasing day by day and the supply is not enough to facilitate everyone. In such shortfall of energy supply and high demand for consumption, energy harvesting is truly a magnificent approach to bridge the gap between supply and demand. Using energy harvesting networks, we can harvest the ambient energy available in surrounding such as light, heat, electromagnetic and mechanical energy and can convert them into useful energy. Though, the amount of energy being produced by energy harvesting network is low, however, it can still be used to power small and portable electronic devices including our cellular phones –one of the most important devices used for communicating, all around the world. As the researchers are doing extensive research in this field to discover new techniques to produce more and more energy from energy harvesting networks, it seems that, in coming world, energy harvesters would be fulfilling more than 50% of our energy requirements.

The rapid demand of energy harvesting modules can be observed by the given graph over certain period of time. 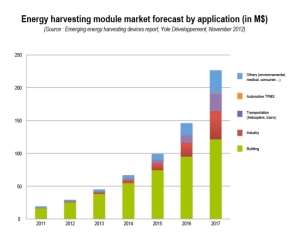 Metamaterials are composite materials having a structure that exhibits such properties that cannot be found, usually, in natural materials, especially the property of having negative refractive index. Metamaterials are capable to capture different forms of wave’s energy and tune them into useful applications.

Harvesting energy from the ambient environment is being considered as a valuable alternate to replace the existing power supplies for energy constraint embedded systems. Especially, the latest research done on energy harvesting of microwaves, radiated from Wi-Fi mainly, has enlightened a new hope among the researchers to identify such energy harvesting methods that can raise the amount of power generated using the power harvesters. These methods would be going to assist in placing the energy harvesters as one of the best power sources for portable power devices in the field of wireless technology.

[15] Williams C B and Yates R B, “Analysis of a micro-electric generator for microsystems,” in Proceedings of Solid-State Sensors and Actuator and in Eurosensors IX. Transducers, 1995, v 1, pp 369–372.