The majority of the nervous system cells are glial cells, which have various properties and functions. Schwann cells are the principal glial cells of the peripheral nervous system(PNS). In normal nerves, they function to form insulating myelin sheath around axons and provide support to neurons. In injured nerves, however, they change their properties and switch function to that of supporting nerve regeneration. Understanding their ability in the switching process could lead to better treatment for those suffering from nerve injuries. This essay gives an overview of the structure and development of Schwann cells and the causes of nerve injuries. It also provides an explanation in the role that Schwann cells play in supporting nerve regeneration and how different approach could promote nerve regeneration. 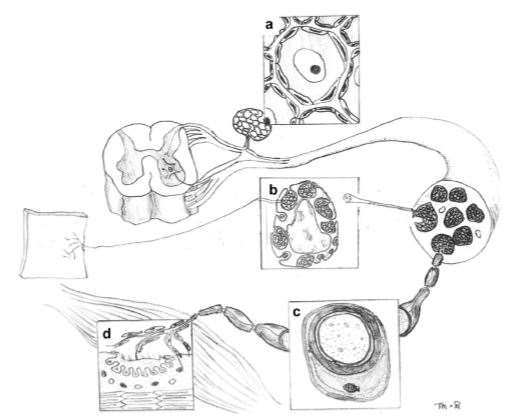 Each subset of Schwann cells has different functions. For example, perisynaptic Schwann cells are essential for modulating NMJ function whereas satellite Schwann cells have the ability to regulate the neuronal environment (Armati & Mathey, 2007). Non-myelinating Schwann cells associate with several axons via a single layer of myelin.

Myelinating Schwann cells are the most studied Schwann cell subset and they are most known for their function in speeding up the propagation of action potentials. Myelinating Schwann cells wrap around axons of neurons to form the insulating myelin sheath. Between the myelin sheaths are periodic gaps called nodes of Ranvier where action potentials occur. Action potentials jump from one node to the next node,in a process called saltatory conduction, which increases conduction velocity and allows signals to be propagated long distances without any degradation.

In addition to their function in the propagation of action potentials, Schwann cells have many subtle yet essential functions, one of which is its role in nerve regeneration. This essay will focus on the characteristics of Schwann cells and how they respond to injury that allows the PNS to regenerate after damage. 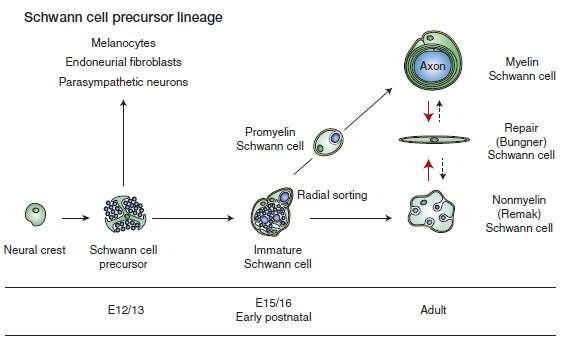 Peripheral nerve injury is injury to peripheral nervous tissue. It can occur at any point along a peripheral nerve. Nerves can be damaged by a number of mechanisms such as compression, traction, or a cut. They can also get damaged by toxins, infection and physical agents such as freezing and electrical current (Murray, 2014).

In order to understand the pathophysiology of peripheral nerve injury, it is important to know the anatomical structure of a peripheral nerve (Figure 2). Axon is made up of neurofilaments and microtubules that transport substances between the nerve cell body and the axon terminal. All peripheral nerve axons are associated with Schwann cells. In larger (myelinated) nerves, Schwann cells generate layers of myelin around the axon to form a sheath, whereas in smaller (unmyelinated) nerves a single Schwann cell associates with several axons via a single layer of myelin. The connective tissue (the endoneurium) that surrounds the axon-Schwann cell unit provides structural support to individual axons. Nerve fibres are further protected by a surrounding multipayered cellular tube (the perineurium) that surround nerve fascicles (Jessen, et al., 2015; Murray, 2014). Finally, the entire nerve trunks are protected by the outermost connective tissue (the epineurium) (Murray, 2014).

Regardless of cause, there is a limited range of responses to peripheral nerve injury. Wallerian degeneration.
Wallerian degeneration occurs when there is a loss of axonal continuity by cut or crush. Communication is lost between the cell body and the segment of nerve distal to the site of injury. As a consequence, the distal nerve segment degenerate. The details of the initiation of this degeneration remain to be fully explained, but evidence shows that an increase in intraaxonal calcium activates proteases, which leads to the degradation of the axon cytoskeleton.

Wallerian degeneration is also associated with the degeneration of the myelin sheath by lipases and proteases. Schwan cells (and later macrophages) are involved in further myelin degeneration. Schwann cells also proliferate and undergo morphological changes and are induced to generate molecules that will be required for nerve regeneration later on.

There are two main types of peripheral nerve injury (Burnett & Zager, 2004). The first type is axonotmesis, in which axons are damaged but the connective tissue sheaths are preserved. This type of injury can be caused by compression, traction and laceration but it is mainly seen in crush injury (Murray, 2014). Axonal regeneration is very effective and function is restored in 3-4 week when modelled in rodents by nerve crush (Jessen, et al., 2015).
The second and the more severe type of nerve injury, neurotmesis, involves damage to both the axon and connective tissue sheath. Severe traction, crush and laceration can lead to neurotmesis (Murray, 2014). In this case, functional recovery is generally poor.

When nerve injury occurs, Schwann cells respond rapidly and undergoes a radical phenotypic change. The process has two major parts, one of which is the reversal of myelin differentiation. Molecules involved in forming Schwann cells before myelination are up-regulated while myelin associated genes are down-regulated (Jessen, et al., 2015). The other part of the response involves the appearance of phenotypes that are not associated with normal Schwann cells or immature Schwann cells. These cells have a repair supportive phenotype and contribute to the nerve regeneration process.

When an axon is cut, the end still attached to the cell body is called the proximal segment, while the other end is called the distal segment. The process of nerve regeneration involves the formation of axonal sprouts at the proximal stump and the growth of axonal sprouts until they enter the distal stump. Efficient nerve regeneration needs a suitable microenvironment which is regulated by macrophages via their phagocytotic and clearing functions (Barrette, et al., 2008).

Experiment by Huang et al. showed that Schwann cells can secrete macrophage migration inhibitory factor (MIF) when peripheral nerve injury occurs (Huang, et al., 2002). MIF is a pluripotent cytokine that functions in inflammatory reactions and immune responses. It also plays an important role in macrophage activation, attracting macrophages to clear away debris at the injury site and regulate the microenvironment to allow for efficient regeneration.

Nishio et al. administered anti-MIF polyclonal antibody into regenerating rat sciatic nerves using the silicone chamber model. The results showed that the regeneration length of the nerve in the anti-MIF antibody-treated group was significantly shorter than that in the control group at weeks 2,4,6 after surgery (Nishio, et al., 2002). In addition, a large number of apoptotic Schwann cells were observed the anti-MIF antibody-treated nerves. These results suggest that MIF also contributes to the acceleration of peripheral nerve regeneration and the prevention of Schwann cell apoptosis (Nishio, et al., 2002).

Besides MIF, other cytokines such as MCP-1 were also secreted by Schwann cells

Schwann cells are highly plastic. The change has been characterised as de-differentiation (Chen, et al., 2007), but it is also seen by some groups as activation (Armstrong, et al., 2007). The two terms seem to be contradictory to each other, but this can have a simple explanation, which is that the change in Schwann cell phenotypes during Wallerian degeneration in fact involves both of these processes. The conversion of

NTFs are peptides or small proteins that support the growth and differentiation of neurons. The level of their expression is elevated in Schwann cells during nerve injury. Because of their strong function in promoting neuronal growth, they may be used to prevent the impairment of function or death of neurons during nerve injury (Niu, 2009). Most NTFs produce their effects by signalling through receptor tyrosine kinases (Malenka, et al., 2009). NTFs can be divided by their cellular mechanisms into three families, namely the neurotrophin family, the CNTF family and GDNF family (Henderson, 1996)

NGF is the first discovered neurotrophin. It is critical for the proliferation and survival of neurons, especially after nerve injury. Schwann cells express an elevated level of NGF during nerve injury, which promotes axonal regeneration and accelerates the process of nerve repair (Niu, 2009). Recombinant NGF have been produced in laboratory and it is regarded as a feasible therapy for neurodegeneration of the CNS and PNS (Colangelo, et al., 2005).

BDNF help to support the survival of existing neurons and promote the growth and differentiation of new neurons (Huang & Reichardt, 2001). Schwann cells that are genetically modified to overly express BDNF significantly improve the survival of spinal gangalion neuron (Pettingil, et al., 2008). Takano et al. developed an in vitro model for retinal explants and showed that BDNF greatly promoted the regeneration of neurites from retinal ganglion cells in a damaged retina. A considerabe number of neurites were observed within 24 hour in the group containing BDNF while only a small number of neurites were observed after 3 days in the control group (Takano, et al., 2002).

Other neutrophins use different ways to accelerate nerve repair when damage occurs. Using NT-3 alone or in combination with other NTFs can promote nerve regeneration in the injured spinal cord (Taylor, et al., 2006; Arvanian, et al., 2006). Research by English et al. showed that neutotrophin-4/5 is required for the early growth of regenerating axons in peripheral nerves (English, et al., 2005).

The CNTF family includes CNTF, leukemia inhibitory factor (LIF) and interleukin-6 (IL-6). LIF and IL-6 can act directly on neurons to promote axonal regeneration (Jessen, et al., 2015). The most prominent function of the CNTF family is its prevention of motor neuron degeneration, which suggests that it can be used as a therapeutic treatment for human degenerative motor neuron diseases (Sendtner, et al., 1992).

GDNF is a small protein that supports the survival of many types of neurons including motorneutrons. It can also prevent apoptosis of motor neurons caused by axotomy.

CAMs secreted by Schwann cells are involved in peripheral nerve repair. They play an important role in axon growth and formation of nerve bundles. Study from Lavdas et al showed that Schwann cells have the ability to migrate in the CNS, promoting myelin regeneration and making it possible for remyelination in the CNS (Lavdas, et al., 2006) .

Experiment from Park et al. showed that the attachment and proliferation of Schwann cells are affected by special CAMs. It is therefore important to consider choosing optimal CAMs for tissue-engineered nerve regeneration (Park, et al., 2008).

Schwann cells use the above four ways to function during peripheral nerve repair. Many years of research have already proved that Schwann cells can secrete a large amount of molecules to support neurons and accelerate the damage repair process. However, further research is needed to show whether As

Although the PNS is able to regenerate, much research still needs to done to maximise regeneration potential.