UAC 1.2: Detail the role of the regulation of breathing.

Question 1: During exercise, the rate of breathing increases. How does the body detect, coordinate and respond to increase pulmonary ventilation and why is it important? (250 words max)

When exercising the pulmonary ventilation rate and depth expands so oxygen can diffuse from the air to the blood quicker and carbon dioxide can diffuse from the blood to the air faster. The brain is ultimately in charge of breathing; the brain stem utilises sensors to manage breathing. Breathing results from coordination of three interactions; a sensory system, respiratory control centre and an effector system. These sensors, called chemoreceptors are supported by nerves and muscles. Chemoreceptors recognise chemical substances and pass this data to the nerves in the central nervous system. During exercise there is an expansion in carbon dioxide which causes a reduction in the pH of blood. The additional carbon dioxide in the blood is detected by the chemoreceptors. Because of a diminishing in the pH, the respiratory control centre in the medulla, sends nervous impulses which instruct the intercostal muscles and diaphragm to contract harder and all the more often, which increase the breathing rate and the volume of the lungs during inhalation. Working together, the body is continually monitoring and adjusting pH and oxygen in the arterial blood. Breathing endeavours to maintain stability. Elevated amounts of carbon dioxide triggers speedier and more profound breathing. This expanded breathing reduces the concentration of carbon dioxide in the blood increasing the measure of oxygen taken in.

UAC 2.1: Explain the process of ventilation including detail of lung volumes and capacities. 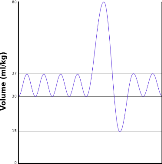 During inhalation the diaphragm contracts, simultaneously the intercostal muscles allow the rib confine to raise. This creates a drop in the pressure inside the lungs and extends the chest cavity, subsequently expanding the lung volume making a partial vacuum causing air to be passively drawn into the lungs from the respiratory tract to fill that space. The reverse occurs during exhalation. The muscles no longer contract and are relaxed. The diaphragm curves and raises, the intercostal muscles descend and the chest volume decreases. The chest cavity contracts therefore increased air pressure, causing the air in the lungs to be expelled passively through the upper respiratory tract. This is known as the tidal volume which is the volume of air took in and out in one breath when at rest.

Sufficiency of ventilation is measured by a spirometer, (an instrument for recording volumes of air taken in and breathed out). Figure 1 demonstrates a following of a spirogram. Each breath invigorates a quantity of the air in the lungs and carries away a quantity of the carbon dioxide made by the body. Air moves in and out of the lungs around 12 times per minute in the average person as the diaphragm and intercostal muscles contract and relax, this is the ventilation rate and is calculated by the number of peaks in one minute. At the point when a person breathes in and out profoundly then considerably more air can be exchanged, this is known as vital capacity. The oxygen take-up is different as the carbon dioxide is expelled, the tidal volume in the air chamber decreases. The volume of air removed is shown by the distinction in height of the last peak from the first peak amid ordinary breathing. There is constantly some air left in the lungs that cannot be exchanged in light of the fact that the alveoli do not completely collapse; this is known as the residual volume.

UAC 2.2: Explain the characteristics of efficient gaseous exchange and show with reference to diagrams how this is achieved in the lungs and capillaries.

Question 3: Explain, using Figure 2, how the structures of the lungs and capillaries are adapted for efficient gas exchange. (450 words max) 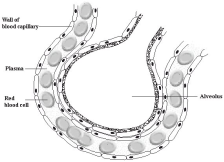 Figure 2: Diagram of an alveolus

The lungs are adapted for the effective gas exchange; the exchange surface must have the ability to exchange gases quickly enough to oblige the requirements of the cells. The lungs contain a huge number of tiny, air-filled sacs called alveoli. Within the alveoli, an exchange of gases happens between the gases inside the alveoli and the blood by passive diffusion.

The alveoli are adapted to make gas exchange in the lungs happen effectively and proficiently. The walls of the alveoli are a single cell thick and are made of flattened epithelial cells, making the exchange surface thin which shortens the diffusion pathway over which gases need to make. In order to maximise the amount of diffusion taking place, the alveoli are folded up truly fine, giving an expansive surface area. This means more gas can be exchanged at the same time and it happens speedier which implies the lungs can ventilate faster. The alveoli have a moist layer; this moisture is passed through the cell membrane of the alveolar cells. The alveoli are kept moist to dissolve gases. The moist lining additionally diminishes the surface strain, which means less energy is required to inflate the alveoli and prevents the collapse of alveoli. Every alveolus is encompassed by numerous capillaries; these capillaries are slender so that the red blood cells are squeezed against the capillary wall giving a good blood supply, therefore giving a short diffusion pathway.