Dental implants have become a significant aspect of tooth replacement in prosthodontic treatment. High implant success rates of the order of 78-100 % have been published, with more than 15 years of observation time. Treatment success of dental implant mainly depends on the stability of the implant bone support. Implant stability is a mechanical phenomenon which is related to the local bone quality and quantity, type of implant, and placement technique used. The application of a simple, clinically applicable, non-invasive test to assess implant stability and osseointegration is considered highly desirable. Resonance frequency analysis (RFA) is one of such techniques which is most frequently used nowadays. Aim of this paper is to review the technique of Radio frequency analysis and use of it to check the implant stability.

1) Optimal loading decisions : It makes it easier for dentists to decide when is the optimal time to load implants. At placement, stability can be difficult to quantify objec­tively by merely relying on tactile perception. Torque measure­ments are difficult to repeat once the implant has started to integrate and can therefore not provide a baseline for subse­quent comparisons. The invasive torque method may even damage the healing if used for monitoring osseointegration

2) Early warnings – preventing failure : Dentists sometimes encounter patients whose initial stability score is low. The reason could be that they have had to undergo a bone graft. In such higher-risk situations, most surgeons would avoid an early-loading protocol. Similarly, a significant decrease in stability indicates a potential problem and should be considered an early warning. The surgeon may prefer to unload the implant – or perhaps place additional implants – and then wait until stability increases. RFA system makes the treatment of high-risk patients easier and more predictable – allowing more of these patients to be treated and more of their treatments to be successful.

3) Quality assurance : Because RFA system helps the dentist decide when to load and avoid failure in high-risk situations, it becomes a quality-assurance system for the clinic. Most patients intuitively understand the stability measures and how they govern when to load an implant and when to wait. This increases their sense of confidence, security and quality.

ISQ (Implant Stability Quotient) is a measurement scale for use with the RFA (Resonance Frequency Analysis) method of determining implant stability. It’s a mapping of resonance frequencies (kHz), presented as a clinically useful scale of 1-100 ISQ. 1 is the least ISQ value and 100 is the highest ISQ value. ISQ is used RFA to measure stability because 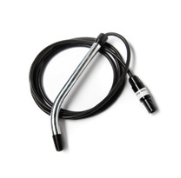 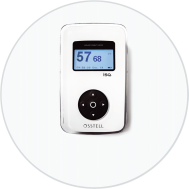 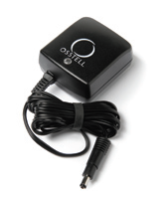 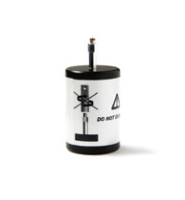 Resonance frequency analysis (RFA) uses a sophisticated technology with computer-based measurement of resonance frequency (RF), which is determined by two parameters: the degree of bone density on implant-bone interface area and the level of marginal alveolar bone around the transducer Osstell is representative of RFA-technique and was tested first in 1997The apparatus consists of an Osstell transducer and Osstell analyzer connected to a PC or independent. The transducer is L-shaped or bolts-like (smartpeg) and firmly screwed in order to be positioned on the implant and its superstructure (4–5 N/cm²) and consists of 2 small voltage controlled transducers. High-energy pulse-type oscillations of a continuous sinusoidal pulse excite implant, in order to register the mechanical vibration between the implant interconnection zone and the bone. As soon as the apparatus is activated the first electric transducer applies excitation signal of increasing frequency from 5 to 15 kHz to implant. Other voltage-controlled element registers ultrasonic vibrations response, ie resonant frequency of the implant-bone interface area and transmits a created signal to the amplifier, which amplifies it and to the analyzer which reads, evaluates and compares it with the frequency of the original signal. The measured amplitude of resonance frequency is displayed numerically and graphically on the Osstell analyzer, and the maximum amplitude represents the stability of the implant, quantified through the ISQ units. The ISQ value reflects the rigidity of the system transducer- implant-bone and transducer calibration parameters. Measured on a scale from 0 ISQ (3500 Hz) to 100 ISQ units (8500 Hz), a higher ISQ value indicates a greater stability of the implant. After a while ISQ values rise because of osseointegration where implant–bone the connection becomes stronger. 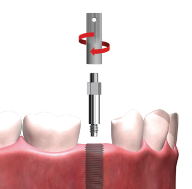 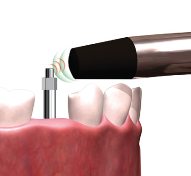 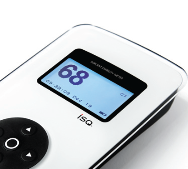 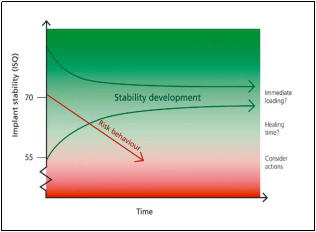 This graph illustrates the progress of implant stability over time, expressed in ISQ terms. The converging green curves show the two most likely scenarios: implant stability eventually sets at around 70 ISQ. A high initial ISQ value tends to decrease, as mechanical stability is supplanted by osseointegration. And a low initial value tends to increase, as osseointegration sets in. The scenario to watch out for is illustrated by the red curve. Here, osseointegration is not progressing as planned, and loading such an implant may result in a failed treatment… High initial stability (ISQ values of 70 and above) tends not to increase over time despitethe fact that the initial high mechanical stability decreases and is replaced by increased biological stability. Lower initial stability normally increases with time because the lower mechanical stability is increased by the bone remodeling process (osseointegration). Values of ISQ 55 or lower should be taken as a warning sign and actions to improve the stability should be considered (larger implant diameter, longer healing time, etc.)* *(Implant stability measurements using Resonance Frequency Analysis. Biological and biomechanical aspects and clinical implications. Periodontology 2000, 2008. Sennerby & Meredith)