The way that science works is to shut down invalid theories and show how the world actually works. What we are trying to figure out is that how our ideas about systems in nature work are getting better and better over time. Science gets better and better by having a wrong hypothesis. Getting rid of the wrong notions of how the world mechanisms is caused by having a wrong hypothesis. There is an importance on understanding how certain natural methods function so that we can predict all the imaginable behaviors that are necessitated to nature. Modern-day sciences are built from the outline of Scientific Paradigms. Scientific Paradigms are intertwined philosophies of a certain phenomenon also known as the bigger picture of procedures that core a specific science. Scientific Paradigms assist the development of scientific philosophies so that many researches do not have to begin from nowhere and can just create more ideas off of what the past researches have done. Science didn’t start with the scientific method, and is actually something recent. Normal science is what Thomas Kuhn calls standing paradigms that are experienced by techniques that scientists say are proper for launching their legitimacy. Scientists have found ways to explain their data formulated to show the extensity of their views.

Reproduction is a main characteristic of all living things. Population growth is from living things reproducing many times. “Studying population growth gives scientists insight into how organisms interact with each other and with their environments. This is especially expressive when considering the potential impacts of climate change and other changes in environmental factors.” (Sunny B. Snider) Rapid population growth can be based on life history and the type of organism because some organisms can reproduce much more than others, and in that case growing the population rapidly. Exponential growth is the best for a repeatedly reproducing population. Many populations grow exponentially, so when resources are not limited, populations begin to grow and grow. No population can remain to grow forever.

Astrology is the belief that the lives of people on earth are determined by the action of spiritual bodies. Also has a pretty long history in numerous philosophies and the astronomical remarks linked with astrology gave rise to the actual science of astronomy. Folk magic is dealt with beliefs that are spoken to from people to people.

Using the Scientific method, we will show that folk magic or belief and astrology are not true. My group and I have done an experiment on Astrology and Folk magic. These experiments are dealt with medieval sciences.

In this experiment we targeted the null hypothesis of being given an astrological journal and predicting the sign. Given the reading, there is 8 choices and there is a random chance of matching 1 of 8 in the reading. The chance of 1:8 is 12.5% and that is your probability of being correct and choosing the correct symbol by chance.

Our group was given 8 reading per person, and we tested to see who got the most correct matching pairs. Once we were all finish with matching, we were then given the answers.

To test out our hypothesis, we are going to use the Chi Squared Test with our observed data.

What we are using is the degree of freedom as 1 and the alpha value of .05.

As calculated x^2=3, so this shows us that the null hypothesis was accepted because 3 is less than 3.84. So given a random situation, we are now sure that the data set is satisfactory. Showing this, we can have psychic abilities but there is no statistical evidence that we can have that just buy guessing correctly.

In this experiment our goal was to get at least 5 out of 25 shapes correct. In this experiment we were to have 25 cards in total and randomly choose which shape is on the flip side of each card. The average random guessing to be correct should be about 20% which is 1 for every 5 cards guessed. Also if you would’ve chosen more than 5/25 cards, we would consider folk magic to be correct.

In this experiment we would have one person shuffling the deck and deal 5 cards every time. After 5 cards were dealt, the guesser would guess which shape is under each card. The dealer would record all the correct and incorrect attempts the person guessed.

After calculating for x^2= 1.80, and this shows that our null hypothesis is accepted and this reveals that 1.8 is less than the 5.99 and that if we are given random situations we would be able to believe that random guessing is the cause and not medieval science.

Population growth is consisted of Reproduction, which is a fundamental characteristic of all living things. All organisms are able to reproduce and grow the population behind a set of possible conditions. When resources are not limited for organisms, many populations of organisms are growing exponentially and are not being limited so that is why they are reproducing at the time they can. When being limited of resources, many organisms do not reproduce and in which the population will not grow rapidly. “In contrast, the effects of density-dependent factors intensify as the population increases in size. For example, some diseases spread faster in populations where individuals live in close proximity with one another than in those whose individuals live farther apart. Similarly, competition for food and other resources rises with density and affects an increasing proportion of the population.” (John N. Thompson-2017)

The algae we have chosen and used as a group was Cosmarium- Cosmarium is a green algae. “Cosmarium is a common free floating freshwater placoderm desmid found in ponds, lakes, ditches, and other reservoirs.” (Ushering Nidup) Cosmarium is tough to identify to species, because many members of genus are pretty identical.

In this experiment, we are using cosmarium to hypothesize what will happen when it is under 2 different living conditions over the course of a few weeks. We are looking for the growth rate and if there is going to be rapid population increases over the time we let the experiment build itself.

First of all, we will be using a pipette and displaying 5 drops of 2.5uL which is 2.5 microliters onto a petri dish, then we will count the number of algae in each of the drops and average them out to one amount over the course of the drops. Then we would use the average number of algae and convert that to density for each microliter. The density the group calculated was about 1000 individuals per 10mL in a test tube.

We’ve placed two test tubes under a light source that was giving the full total of light to the test tubes. The second test tube was the same exact as the first one and were both placed in a tray that was sitting under the light source. Placing the test tubes in different places forces the populations to grow at different rates and if one of them is receiving more light than the other then the it might be receiving too much light and stop growing or as we call it “Carrying Capacity”. 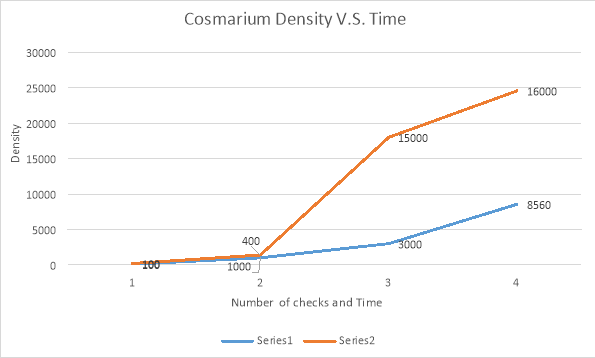 In the First experiment, we have tested for astrology. We have done this by matching horoscopes with a journal. We were given 8 journals and we would match them. The amount expected to get correct out of 8 was 1. You aren’t psychic if you get all 8 out of 8 horoscopes correct. Getting them correct is pure chance and luck. Random guessing has nothing to back it up and it’s just actual random guessing.

In the Second experiment we have completed, we tested to see if we were psychic or not by guessing what shapes were under each card for 25 cars. The expected amount right we should’ve gotten was 5/25. There is no special ability that you have if you were able to guess more than 5/25 correct, in our group there was one person who was able to guess 6/25 correct but this does not make him a psychic. Chance is the only reason why we’re getting these random guesses correct or over average. Our null hypothesis was supported because we knew there was no correlation in being psychic and random guessing.

In our Third experiment, we have created a culture of algae containing Cosmarium. We have checked on the algae culture every 7 days starting from day 0 to day 21. At day 14 we have seen a major spike then everything after that was all increased. The number of individuals in each culture after those days was rapidly increased after day 14. We call this rapid population. “If 1000 bacteria are placed in a large flask with an unlimited supply of nutrients (so the nutrients will not become depleted), after an hour there will be one round of division (with each organism dividing once), resulting in 2000 organisms. In another hour, each of the 2000 organisms will double, producing 4000; after the third hour, there should be 8000 bacteria in the flask; and so on. The important concept of exponential growth is that the population growth rate, the number of organisms added in each reproductive generation, is accelerating; that is, it is increasing at a greater and greater rate.”