Among various metal oxide semiconductors, Titanium dioxide (TiO2) is considered as a prime candidate for study due to its diverse electrical and optical properties, non-toxicity, high chemical stability and ease of mass production with applications in catalysis, hydrogen production, controlled drug release, and sensing. TiO2 is also used in solar cells and optical coatings due to its high refractive index and widely used in memory devices along with microelectronic capacitors because of the high dielectric constant and resistivity.[1-9] Furthermore, TiO2 plays a significant role in water purification and anti-bacterial applications including decomposition of organic pollutants which can address the environmental pollution crisis.[10]

Titanium dioxide is a wide band-gap semiconductor that exhibits n-type conductivity with three distinct crystalline phases: rutile, anatase, and brookite. In case of thin films, anatase and rutile structures are commonly seen.[11] Anatase is a low-temperature metastable phase with application as photocatalyst due to its high photocatalytic activity and transformed to more stable rutile phase at high temperature.[12] Electrons in the anatase phase behave as free electrons [13] and are predicted to be highly catalytically reactive [14-19] which makes the anatase structure preferable for applications in the fields of highly conductive semiconductors.

By definition, the active sites on metal oxide surfaces which undergoes chemical reaction are known as defects. Defects are critical for understanding the atomic and electronic structure of oxide surfaces due to their crucial role in surface reactivity. The defects in anatase TiO2 surfaces are highly reactive and generally are oxygen vacancies (Vo2-) and Ti3+. Oxygen vacancies often appear in oxides and are easy to manipulate to substantially alter the properties of materials. Therefore, they are very important types of defects for the study of oxides.

TiO2 thin films can be deposited using a variety of methods but among those methods, RF magnetron sputtering can produce uniform films with good adherence to the substrate along with mass-scale large area film deposition which is suitable for industrial applications.

In this work, TiO2 thin films were deposited onto fused silica substrates using RF magnetron sputtering method. Localized laser annealing was performed to optically fabricate circuits. The present study further aims to investigate the electrical, optical, and structural properties of optically fabricated TiO2 thin films. Finally, we report the reversibility experiment which enables us to write and rewrite localized electronic circuits on TiO2 thin films using a laser. The fabrication technique does not damage the film nor appreciably changes the surface morphology and composition.

TiO2 thin films of 300 nm thickness were deposited onto fused-silica substrates by RF magnetron sputtering followed by an argon (Ar) etching with 300 V etching bias. The sputtered deposition was carried out at room temperature for 6.5 hours under a gas mixture of 80% Ar and 20% O2 and 10 mTorr pressure. The target bias voltage was set to 450 V with a deposition rate of 0.8 nm/min.

TiO2 thin films were vacuum annealed at 32 mTorr pressure and 8000 C for 3 hours. Vacuum annealing increases the oxygen vacancies in the film resulting in higher conductivity.[20] Conversely, annealing in the open-air oxygen-rich atmosphere reduces the concentration of oxygen vacancies. To optically fabricate circuits in TiO2 thin films it undergoes localized annealing using a 532 nm continues wavelength laser operating at 1.5 W power. Laser annealing locally decreases the concentration of oxygen vacancies resulting in a substantial increase in resistance only at the annealed region making the region insulating. Figure -1 (a) and (b) shows the laser annealed stripe with a feature size of approximately 1.5 mm along with pressed indium contacts with silver paint and copper wires. The insulating stripe is composed of approximately 60 laser lines drawn consecutively 25 m apart on the film using a movable 2D stage. Figure (b) also shows thin insulating stripes made by variable laser output power. The sample once again went through vacuum annealing after the laser treatment to investigate reversibility of the process. 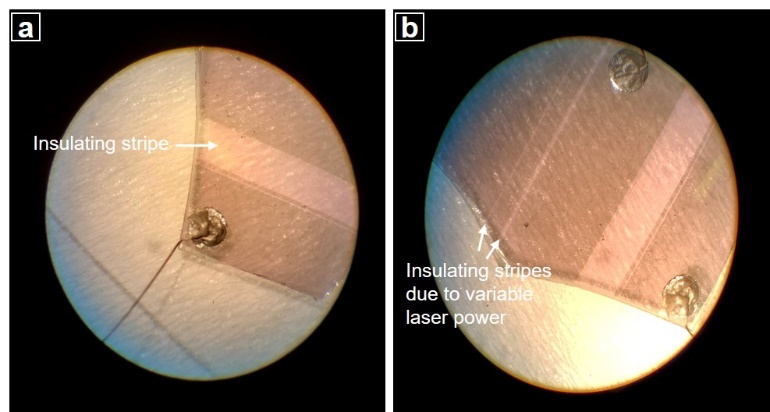 Two-probe resistance measurements were carried out using Keithley 2400 SMU and 6487 pico-ammeter with pressed indium contacts, copper wire, and silver paint. Surface structure, morphology, and composition of the film were investigated using a scanning electron microscope (SEM) with in-lens SE2 detector and energy-dispersive x-ray spectroscopy (EDS). The optical transmittance spectra of TiO2 thin films were measured at room temperature by mean of UV-Vis-NIR spectrometer (PerkinElmer Lambda 900) in the wavelength range between 300 and 800 nm.

To investigate the phase of TiO2 thin films, a Raman microscope (Renishaw inVia) was used to collect Raman spectra. A He-Ne laser was used as a monochromatic excitation source with 632 nm excitation wavelength at a magnification of 100 times. The Raman spectrometer was adjusted carefully to ensure that all the samples undergo similar testing conditions. For signal processing, the background was splined and a Savitzky-Golay filter was used in order to smooth the spectra.

The oxygen vacancies in TiO2 thin films act as shallow donors [21,22] and are responsible for the films n-type conductivity. Annealing the sample under vacuum makes TiO2 thin films conducting (104 ) due to the increase in the density of oxygen donors. On the other hand, localized annealing using the laser under oxygen-rich atmosphere like open-air makes the sample insulating (1012 ) due to the decrease in oxygen donor’s density. These lead to optically defining circuits in TiO2 thin films with localized laser annealing. The two-probe electrical measurements carried out at the vacuum annealed site and across the laser-treated stripe shows (figure – 2) change in resistance overtime at the optically defined insulating site and their photoconductivity under UV light, fluorescent source, and dark condition. The EDS spectrum of vacuum annealed laser-treated TiO2 thin film on the SiO2 substrate shows significant amount of Si, Ti, and O in the sample as expected and can be seen in figure – 4. The spectrum also illustrates the presence of C with very low intensity. The EDS element mapping of the sample demonstrates that there are no substantial changes in the composition due to localized laser annealing and confirms that the composition the film is intact after the treatment. As seen in figure – 5 (a) to (d); the composition of Si, Ti, and O are uniform across and at the laser annealed & vacuum annealed interface. Optical transmission spectroscopy is one of the most widely used technique to analyze band structures. It is possible to analyze optical constants such as the absorption coefficient and refractive index along with film thickness using the transmittance spectrum which bears a great significance in designing and analyzing optoelectronic devices. Transmission spectra were collected to analyze the band structure, optical band gap, and refractive index hence the thickness of the vacuum annealed laser-treated TiO2 thin film. Figure – 6 (a) shows the optical transmission spectra of as-deposited, vacuum annealed and laser-treated TiO2 thin film on SiO2 substrate. The as-deposited film was highly transparent in the visible region with transparency of > 85%. There is a sharp fall in transmittance < 60% for the vacuum annealed region which is due to the increase in surface roughness formed during the annealing process but mainly caused by an increase in free-carrier absorption and demonstrates conductivity in the K range.For the localized laser-treated region the transmittance is restored up to 70% with more than a 7 order-of-magnitude change in resistance and the transparency of the region can be attributed to the fact that there was a decrease in free-carrier absorption. There is a sharp decrease in transmittance below 400 nm. This is because of the fundamental absorption of light due to the transition of electrons from valence band to the conduction band. Anatase has a tetragonal symmetry with space group D4h19. There are six active Raman modes in anatase: A1g + 2B1g + 3Eg [22]. The three Eg modes are centered around 144, 197 and 640 cm-1. The strongest mode at 144 cm-1 is the characteristic peak of anatase TiO2 due to its correspondence with the symmetric lattice angular vibration. Figure – 7 (a) shows the Raman spectra of TiO2 as-grown, vacuum annealed and laser-treated thin films. The Raman spectra were recorded in the range 100-800 cm-1. Four Raman active vibrational modes at frequencies around 143, 394, 517 and 635 cm-1 confirm the tetragonal anatase phase for the as-deposited sample. Both the laser annealed, and vacuum annealed regions show the same characteristic peak but slightly shifted to 146 cm-1 along with peaks at 198, 394, 512, 632, and 633 cm-1. The Raman spectra suggest that there was no phase transition due to localized laser annealing. As seen from Figure – 7 (b), during vacuum annealing, TiO2 thin films undergo Eg (1) mode blueshifts from 143 to 146 cm-1 but remain unchanged during laser treatment which further suggests no significant change in internal stress and grain size.[23-24] In summary, localized laser annealing can be used to optically fabricate circuits in TiO2 thin film by defining resistive paths on a conductive film with very high precision. Vacuum annealing increases oxygen vacancies in the film which results in higher conductivity with resistance values in tens of K while laser annealing locally reduces the concentration of oxygen vacancies causing the resistance to increase by more than seven orders of magnitude at the annealed region. Output laser power can be used to tune defect concentration hence defining different resistance paths on the film at the locally treated region. The optical transmission spectra relate the change in free carrier absorption with conductivity of the thin film and can be used to study trend in resistance variation with variable laser output power. Furthermore, no significant changes in surface morphology, composition, and vibrational structure were observed due to localized laser annealing suggesting that the laser treatment does not degrade the film nor changes the phase of the material. Changes in conductivity are persistent over time and annealing the sample again under vacuum with similar conditions restored the conductivity which proposes that the process is reversible.