Number advantages such wide availability and consistent utilization of cooking oil throughout the nation, has indirectly resulted to startling questions on the management of used cooking oil. Coined and defined already that, lipids holds the largest portion of organic components in municipal and industrial wastewater particularly from food industries (Prasad & Manjanuth, 2011). Improper management of fatty wastes on the other hand, has led to serious anthropogenic damages such as clogging pipes, congest treatment filters, odour problems, oil film formation and depleting oxygen hence, damaging aquatic livings (Fadile et al., 2011; Cipinyte et al., 2009). Therefore, removal as well as early remediation on lipid contaminant has become a great necessary due to its associated negative impacts.

Considering wide range of versatility of lipase as biocatalyst, this enzyme is catered for both biodegradation and biotransformation productively. However, researchers are still in search of new lipase-lipid interaction to diversify the efficiency and upgrade quality of the existing outcome. Therefore in present investigation, production of lipase enzyme from locally isolated actinomycete known as Rhodococcus sp. was investigated. Denoting minimal documentation on lipase production by this actinomycete, yet the extreme ability of the strain to degrade oil extensively draws great intuition on lipase production.

As an amalgamation of many races, Malaysia has established a robust position for various food cuisines especially variable deep fried dishes. Therefore, large amount of cooking oil is required in the food preparation which simultaneously yields similar portion of utilized cooking oil. Consequently, excessive increments of waste cooking oil (WCO) are being disposed to waste streams continuously which lead to many detrimental effects to the environment. Therefore, it’s absolutely necessary to apply bioremediation concept to comprehensively treat the contaminated waste sites while providing early remediation to manage the increasing abundance of fatty waste materials. In order to emphasize high occurrence of waste cooking oil production especially in Malaysia, a survey was conducted in Teluk Bahang, Pulau Pinang, a local area popularly known for food business. The outcome reveals that the community generates 40% of more than 15kg of waste cooking oil monthly as described in Figure 1.1. 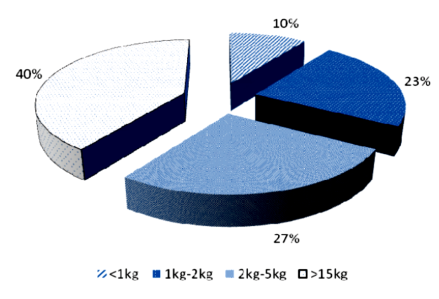 As aforementioned, cooking oil has become a basic ingredient for food preparation in the entire world. Deep frying is recognized as traditional practice of food preparation, where the oil are left exposed repeatedly to excessive heat of 160 ºC- 190 ºC in presence of moisture and air (Kamisah et al., 2012). Additionally, people tend to be fonder of fried food due to the attractive colour, fast preparation, delicious taste and catchy presentation in dining (Cvengros & Cvengrosova, 2004).

As a result, waste cooking oil are extensively being generated due to food and semi product preparation by frying such as fast food networks, restaurants, dining rooms, catering establishments throughout the world (Cvengros & Cvengrosova, 2004; Kulkarni & Dalai, 2006). According to a report by Capital Region District, 2012, almost 1million kilograms of fat contaminants are being disposed through our home drainage every year. Review in Asia countries like Malaysia, China, Indonesia, India and Thailand on the other hand, estimates to produce waste cooking oil for 40 000 tonnes per year (Hanisah et al., 2013).

Nevertheless, if this “dead oil” been disposed to water streams or land, it indirectly causes both water pollution and land pollution. After being disposed to aquatic environment, this contaminant undergoes four natural actions namely weathering, evaporation, emulsification or biodegradation. In exceptional to biodegradation, the rest of natural actions leads to the formation of oil slick or oil film on surface of water. Meanwhile droplets of oil will be vertically distributed in water, increasing BOD and COD value besides, transforming into toxic compound due to degraded oil by-product (Hanisah et al., 2013; Understanding oil spills and oil spill response, 1999; Marjadi & Dharaiya, 2010). Riskily, these cause an interaction between the oil and sediments to occur hence, affecting living of aquatic lives. Indirectly, these carcinogenic compounds can be absorbed into by marine creatures and affect human food chain (Kulkarni & Dalai, 2006; Hanisah et al., 2013; Understanding oil spills and oil spill response, 1999). Figure 1.2 precisely describes natural actions encountered due to disposal of waste cooking oil into water and land. 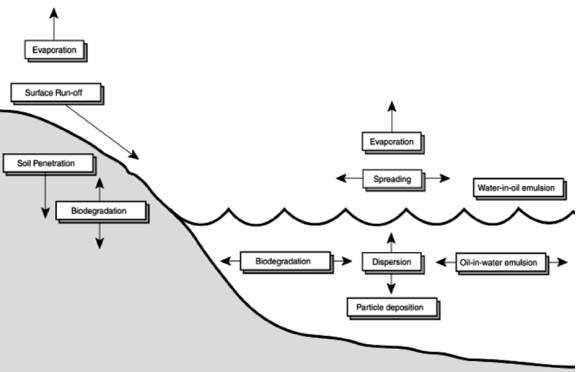 In regards to detrimental impacts imposed by waste cooking oil, it’s absolutely prudent to commence treatment on lipid contaminated sites and further discover feasible ways to manage the fatty waste materials. Therefore, presence research recommends remediation through biodegradation and biotransformation for an effectual management of the waste cooking oil. Lipases, being a ubiquitous biocatalyst significantly extend frontiers of applications through hydrolysis as well as esterification reactions.

Favourably, waste cooking oil that has been disposed to the water streams can be potentially treated with biocatalytic action of lipase producing microorganisms. Waste cooking oil prior to disposal also can be potentially transformed into many value-added products through structure modification by the same catalyst as well. Concerning numerous microbial lipases and wide range of reactions catered by lipase enzyme, it’s essential to obtain this biocatalyst from a novel and reliable source. This will highlight new lipid-lipase interaction with better characteristics for improvement and further add intrinsic value for industrial interests adequately (Jesus et al., 1999; Glogauer et al., 2011).

Considering the alarming production of waste cooking oil by local food industries and household disposal, a feasible remediation requires a promising local yet new source for lipase enzyme. Appropriately, local Rhodococcus strains, an actinomycete isolated throughout Peninsular Malaysia was not been evaluated for lipase production. Being an excellent hydrocarbon degrader, these serial of strains is expected to project excellent level of lipase secretion and further be applied into both biodegradation and biotransformation.

Upon, identification of lipase production from this actinomycete, the best lipase producing strains was optimized for maximum enzyme activity. Since, this bacteria is poorly studied, the crude enzyme was subjected for electrophoresis to estimate the size protein band of the extracted enzyme. Later on, practicability of the optimized strains was applied as both whole cell biocatalyst (naturally immobilised cell) and immobilised intracellular crude. A preliminary analysis of the enzyme to biodegrade WCO and also biotransform WCO into biodiesel was evaluated also for future studies. Precisely, lipolytic actions illustrated in Figure 1.3 are the reactions evaluated in biodegradation and biotransformation of WCO by Rhodococcal lipase in this study.

Figure 1.3: (a) Hydrolytic reactions displayed by lipase enzyme to solubilize fatty acids and further convert into biomass during biodegradation of WCO (Jaeger & Reetz, 1998).

1.5 Objectives of this research

The primary goal of this study is to identify and evaluate lipase producing Rhodococcus strains, as ideal source for bioremediation purposes. Following are the stages of objectives obeyed in this investigation: