Hydrophilic arbutin as lightening agent with log P value -1.35, make it difficult to permeate through the skin and reach its site of action. Sesame oil addition (3, 5, and 7% w/w) was expected to increase the arbutin release and penetrations. The aim of this study was to investigate the influence of sesame oil addition on the arbutin release and penetrations in the Carbomer-940’s gel base. The release (flux) of arbutin, as initial process before penetration, formulation were studied using cellophane membrane and buffer phosphate pH 7.0 as media at 37±0.5°C for six hours long. The penetration of arbutin was observation on inhibition of enzyme tyrosinase activity. Inhibition percent of tyrosinase by arbutin was determined in vitro by observing the absorbance value of dopachrome (an intermediate product of melanin formation) as a reaction product between enzyme tyrosinase and L-tyrosine as a substrate using spectrophotometer. Conclusion of this study was sesame oil addition 3 and 5% w/w decreased arbutin release, sesame oil addition 3, 5 and 7% w/w increased arbutin penetrations. Increasing of arbutin effectiveness more is caused by enhancer effect of sesame oil.

Arbutin widely used in cosmetic as lightening agent to inhibited enzyme tyrosinase activity in basal membrane of the skin. Tyrosinase was known as enzyme that involved in melanin formation.1, 2 Because of the hydrophilic of arbutin with log P value 1.35 make it difficult to penetrate through the skin. To increase the penetration enhancer can be add in the formula. Sesame oil as an oily enhancer has total protein (25%) and globulin (67.3%) its can increased penetration trough polar pathway by enlarge aqueous channel. Sesame oil also can use as healing effect from sunburn.3 It was known Sesame oil effective concentration as enhancer up to 10%.4 The aim of this study was to investigate the influence of sesame oil (3, 5, and 7% w/w) addition on the arbutin (3% w/w) penetrations in the Carbomer-940 gel base through the modified lipid membrane. It was observation on inhibition of enzyme tyrosinase activity. However sesame oil is a viscous fluid can increase the viscosity of base so that it feared inhibits the release of arbutin and decrease penetration. In this study determined arbutin release from the base using cellophane membrane and buffer phosphate pH 7.0 as media at 37±0.5°C for six hours long.

Preparation of the arbutin gel as Lightening product

The Characteristics determination of the arbutin gel

Determination of arbutin release from the bases was done by the dissolution tester Hanson Research SR-6 with paddle stirrer. Each cell diffusion fill with arbutin gel (± 2 grams), in 500mL buffer phosphate pH 7.0, temperature 37ºC, agitation 100 rpm. Samples (5mL) were taken at 5, 10, 15, 30, 45, 60, 90, 120, 180, 210, 240, 270, 300, 330, and 360 minutes, replace with 5mL buffer phosphate pH 7.0 to keep volume constant. The absorbance of arbutin in the sample measured by spectrophotometer. The arbutin release (flux) from the base obtained from the slope of the linear regression of the correlation curve between arbutin releases accumulations versus square root of time.

In vitro study for the penetration of the arbutin in Carbomer gel base was measured by the modification method of the penetration test USP XXV and British Pharmacopoeia, 2002 with diffusion apparatus ERWEKA DT 700.

The in vitro study was evaluated as follows: The arbutin gel (around 3 grams) was put in the diffusion cell then covers with the Millipore membrane which was impregnated with isopropyl-myristate as modified lipid membrane. Then the preparation of arbutin gel in diffusion cell was put into the penetration chamber contain 500 ml of phosphate buffer pH 6.5 ± 0.05 at 37 ± 0.5ºC as diffusion medium, and then the paddle was stirred 100 rpm. The sample solution around 5 ml was collected at 360 minutes after it penetrated.

L-tyrosine solution 0.5 ml added with 3.0 ml sample solution that collected from compartment receptor after 360 minutes penetrated through Millipore membrane which was impregnated with isopropyl-myristate. The mixture was oxygenized 5 minutes then added with 1.0 ml tyrosinase solution. After incubated for 10 minutes at 25ºC the mixture was inactivated with 0.5 ml TCA solution and then the absorption value measured at maximum wavelength of dophacrome.5

The evaluation of inhibition of enzyme tyrosinase activity

A = absorption value (A/second) at dophacrome λ maximum with inhibitor

B = absorption value (A/second) at dophacrome λ maximum without inhibitor

Arbutin release (flux) was calculated from the linier regression of the correlation curve between square root of time versus arbutin release accumulation. Slope (flux) of linier regression showed in table 6. To make sure if there is any difference of arbutin flux between formulas was done by statistical testing using ANOVA one way. It is showed that Fcalculation (50,918) > Ftable (4.07). From HSD result know that flux formula 1 and 2 not statistically different, but if compare with control and formula 3 were decrease. This might be caused by interaction between arbutin, sesame oil, and Tween. Tween is anionic surfactant which is amphiphil, it have affinity towards polar or non polar substance, such as arbutin and sesame oil. This interaction makes arbutin more difficult to release from bases. Another factor that may influence was viscosity from formula 1 and 2 which is more viscous than control, it cause arbutin molecules difficult release from bases also. The increase of viscosity may inhibit the movement of molecules to release from bases.7

Flux value of formula 3 not statistically different with control but higher than formula 1 and 2. It might be caused by addition of sesame oil reduce amount of water from formula. Decrease amount of water caused increase of arbutin concentration on water phase. Substance release from bases is known as diffusion. Based on Fick’s law, diffusion is the process by which molecules moved from compartment with high concentration to low concentration. 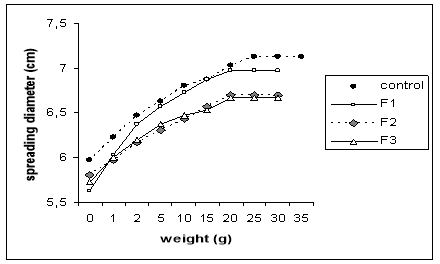 Figure 1: The spreading profile of arbutin gel with various concentration of sesame oil. Each value represents the mean of 3 determinations.

* The result were obtained from an average of 3 times replication

* The result were obtained from an average of 3 times replication

The result of ANOVA one way test of the arbutin effectiveness in carbomer gel formulas found the value of Fcalculation (23,582) > Ftable (4.07), and from the HSD test result was found inhibition percent of control < formula 1 = formula 2 < formula 3. Increasing of arbutin effectiveness more is caused by enhancer effect of sesame oil.

This study was supported financially by Project Grant of Faculty of Pharmacy, Airlangga University, Surabaya – Indonesia.