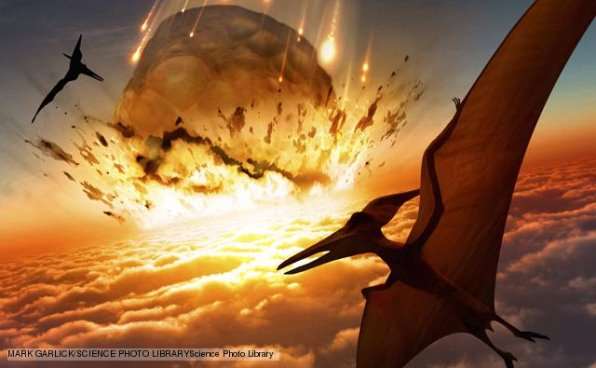 It is believed that an impact event has caused a mass extinction in the past. What’s to say it won’t happen again? An impact event capable of causing a mass extinction is when the planet is struck by an asteroid or meteor large enough to create a huge shockwave felt around the globe. When an impact event happens, the gigantic amount of kinetic energy is partly transferred from the large asteroid or meteorite travelling at high speeds, into the Earth. The rest of the energy is “converted into heat and sound, creating pressure waves travelling radially outwards from its centre, similar to that of an atomic bomb.” (physics.org, n.d.) As well as the blast from the impact, enormous amounts of dust and debris can be kicked up into the atmosphere blocking out sunlight and preventing the process of photosynthesis in plants from occurring, massively affecting the balance of ecosystems. If humans on the other side of the world from where the asteroid hit, survived the initial impact, they would most likely be killed by fiery rocks raining down from the sky and the heavily polluted dust filled atmosphere. Because of the polluted air, humans will not be able to breath properly and the Earth’s temperature will increase immensely. The huge dust cloud formed would block out light from the sun. If the asteroid lands in the ocean a colossal tsunami will form wiping out everything in its path and potentially wrapping around the world. An extensive earthquake will also be felt all over the globe after the impact, which will send structures crashing down and habitats will be destroyed.

Obviously this chain of events would destroy the systems that we depend on for survival, from economic and infrastructure to the biological and fundamental building blocks of life, therefore causing a mass extinction. 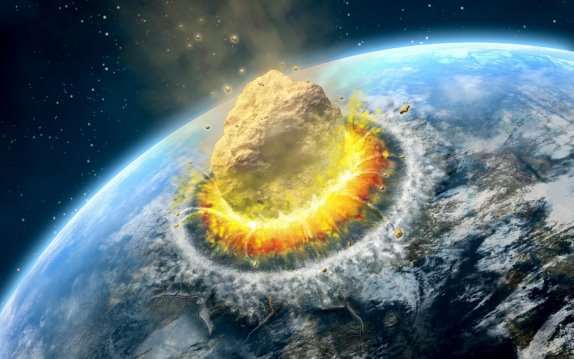 Our planet is currently in the midst of its 6th mass extinction and unlike past mass extinction, caused by events like asteroid strikes and volcanic eruptions, humans are to blame! (biologicaldiversity.org, n.d.) It is human activities such as the emission of carbon monoxide (CO) and the clearing of wildlife that are killing our planet.

Considerable amounts of CO are being emitted into the atmosphere every day because of our industrial lifestyle, but most people don’t realise the harm that is being done to the environment. CO can be released into the air via a multitude of ways, but most commonly through your cars exhaust and the burning of fossil fuels in factories. Once CO is in the atmosphere it takes an oxygen molecule from the ozone molecules contained in the ozone layer in the attempt to make itself carbon dioxide (CO2). In doing this the ozone layer is damaged, therefore affecting its ability to protect us from the sun’s rays. Therefore, global warming occurs and the Earth will eventually be heated to a temperature at which humans and hundreds of thousands of other lifeforms can no longer survive.

Another way in which humans contribute to mass extinction is through habitat removal. Not only does the clearing of habitants destroy the homes of animals, leaving them without a suitable place to live, but it also increases the amount of CO2 in the air. Trees and plants play a critical role in the ecosystem. They absorb carbon dioxide in the atmosphere and convert it into oxygen for us to inhale and use in respiration. By clearing wildlife, we are reducing the amount of trees and plants therefore increasing the amount of CO2 in the atmosphere.

Global warming is no myth and there is plenty of evidence to prove its existence. According to three reliable international agencies, 2016 was crowned the hottest year on record. (www.abc.net.au, 2017) This was no coincidence either, 2015 and 2014 have been the 2nd and 3rd hottest years to be recorded. This is clear evidence that we are impairing the ozone layer and putting our lives in danger and contributing to the next mass extinction.