Hard rock, geological applications of the stable isotopes of nitrogen.

Gammon and Ebbing book of general chemistry define isotope as “an atom with the same number of protons, but differing numbers of neutrons. So isotopes are just different forms of a single element.”[ Gammon, & Ebbing. (2005). (8th ed., p. 467)] There are two broader definitions of isotopes, light isotopes are elements that are lighter (contain less neutrons) than the common more stable element (eg. 12O,26S and 34Cl) and Heavy isotopes are the atom contains greater number of neutrons than the most common form( eg. Fe, Cu and Zn).

Focusing on light stable isotopes in low temperature environments such as H, C and O and with specific reference to Nitrogen isotopes. Below are a few properties of light stable elements:

Sedimentary rocks, low grade igneous and metamorphic rocks (ie. That form at temperatures of 350 degrees Celsius and less) are the type of rocks that we are expecting to find these stables isotopes of interest. Any temperature above this constitutes as high temperature geochemistry.

The use of isotopes in analysis of rocks is of increasing popularity, it uses the variations in isotope abundance of various elements to determine certain properties of a rock. These properties that are available are origin and age of the rocks; air or water bodies and even to see if there has been any mixing of magmas to change the composition of the rocks. Stable isotope geochemistry is mainly focussed on the isotropic variations from mass dependant isotope fractionation as compared with radiogenic isotope geochemistry which uses the products of natural radioactive decay (eg. Half lives).

Many isotopes the amount of fractionation that an atom or body of molecules undergoes is very small (both kinetic or equilibrium), so small measured in parts per thousand or less. The formula above shows us the enrichment factor that is present in a sample. This formula uses the ratio of heavy isotopes to light isotopes as compared with a standard sample. So for nitrogen we will be using 15N/14N

For the purpose of this assignment, we are focusing on the use of nitrogen and its two isotopes 14N and 15N in the analysis of hard rocks. Nitrogen is a colourless, odourless tasteless and most commonly a diatomic non metal gas, it actually makes up 78% of the Earth’s atmosphere. Not only is it over three quarters of our atmosphere but it is a part of all living tissues and is an essential part of life as it is part of DNA and therefore important in the genetic code and the evolution of life. The nitrogen cycle (figure below) is an essential part of existence on earth.

Nitrogen is of low abundance in the earth’s mantle due to lack of knowledge. But fibrous diamonds are a N rich form and are associated with MORB vesicles these have been tested and give a δ­15N value of -5‰, the reason for a negative value is due to it being a relative value to the external sources (atmosphere) This has lead people to believe in the heterogeneous accretion model of the earth. In Pierre Cartigny et al experimental procedure they separated diamonds into broad categories, type 1 has no nitrogen and type 2 does not contain any Nitrogen. These abnormalities are linked to diffusion process and might help tell us if diamonds formed in multiple steps. The nitrogen and the δ15N were measured with accuracy ±2.5% and 0.5% respectively.

After IR analysis 25% of the diamonds taken from Pipe 50 were determined as type 2 , and the remainder a mixture of type 1 and 2 diamonds. These ‘mixed diamonds’ are separate platelets compacted together, this zonation of the aggregated states of type 1 and type 2 platelets conform that the octahedrally shaped diamonds growth was over a extended period. 25% of the samples that were analyzed were found to have a lower value of a δ­15N the in previous works ranging from -12‰ to -25‰ and the nitrogen concentrations vary from 0 to 1473 ppm.

Below figure 2 shows us the δ 15N histogram which show us fibrous diamonds from all over the World and the octahedrally shaped diamonds from pipe 50, the result as can be seen is that they are based around the same value ( -7‰ and -5‰). These results are coincidently similar to the δ13C; this shows us that the fractionation of stable nitrogen isotopes during non fibrous diamond growth is unlikely. The growth of octahedral shaped diamonds should be seen as a large open system with limited supply of volatiles and periods of time in which resorption can occur. Geochemical evidence shows fibrous and peridotitic diamonds originate from similar sources, believed to be the convecting asthenosphere with values of δ­15N being -5 ± 2 and -4.5 ±1‰ respectively. If we wanted to strengthen this argument we would have to look at Diamonds that are found in the lower mantle. These diamonds would originate from a less degassed mantle, this would mean that there would be little to no nitrogen present. If the nitrogen content is controlled by rate of growth rather than the carbon nitrogen ratio of the fluid, this means that there will be little or no correlation between N and δ­15N, and even less between δ13C and nitrogen which is present in this case. [ Geâochimie, et al. (1997). Terra Nova, 9(4), 175–179.] 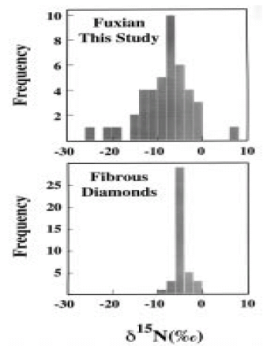 The concentration of stable isotope ratios in fresh basalts on the sea floor provides us with information on abundance and isotope ratio of volatile elements in the upper mantle and crust. Samples were taken from less than 10mm from billow basalt ridges and then other samples were taken from the inner portions of the pillows where the groundmass ranges from glassy to crypto-crystalline. The isotropic ratios δ was atmospheric nitrogen and the uncertainties was ±1‰. The contents and the ratio of nitrogen present in the ocean floor basalts range from 0.3 – 2.8 ppm and from -0.4‰ – 0.8‰. The nitrogen that was attained was of one order of magnitude bigger than the blank nitrogen cycle. This said but the uncertainties in the experiment were rather large ±1‰, this is due to the small sample sizes. This said, the discrepancy of the isotope ratios should not be taken to be significant but the uniformity of the isotropic ratio and their similarity to the N2­ in the air should be emphasized.

Nitrogen’s most common form in igneous rocks is in the form of N2­ and ammonia. When nitrogen vapour is in contact with magma it would most likely exist as N2, but if it is in the magma it will most likely be in the form of ammonia. The nitrogen in the magma itself will most likely escape as N2 from ascending magma and decreasing confining pressure and will act as a alkaline cation when undergoing fractional crystallization and therefore will be more evolved in a more evolved magma. As Degassing and fractional crystallization proceed NH+4 is enriched relative to N­2, and NH3 would become depleted and more enriched in 15N this means that 15N/14N in igneous rocks increases with decreasing nitrogen content. According to Sakai, H et al. The average δ 15N of magmatic crust, atmosphere and sedimentary rocks are 4.2, 0 and 5.2‰ respectively. Therefore the global distributions of nitrogen isotopes have been interpreted as the result of out gassing of magma and fractionation between N2 and NH+4. δ15N found in MORB are close to the crustal values and therefore can be said to support the above model.

Finally in conclusion we can see the importance of nitrogen not only in the atmosphere and our very being. But we can see that there are uses for the stable isotopes in the continued attempts to try and understand the Earth’s history and origin.