To introduce us to proteins, which truly make one organism different from another in terms of phenotype, our instructor challenged us to study the physical and proteomic traits of salmon, catfish, turbot, halibut, and yellow-fin tuna and estimate how each fish is related on the evolutionary tree. To do so, our lab group first accessed online research websites to compare the phenotypes of the different Ichthyoids. We specifically researched sizes, swim types, biological features, habitat preferences, and taxonomic names that derive from the evolutionary tree. After this, we then obtained samples of the muscle tissue in each fish, which were provided by the instructor, and then extracted the proteins from each sample. By treating the samples with sodium dodecyl sulfate and applying heat. We were able to denature the[D1] tertiary and quaternary structures of the proteins, which left the proteins long, stringy, and negatively charged. Next, we were able to separate the proteins by length a la gel electrophoresis, and compare the different proteins in the fish as we observed the different bars that appeared on the gel. After comparing both the physical traits and the proteins in each fish, we were to predict which species preceded the next according to evolution.

Proteins often bind together, forming polypeptide chains. Some atoms on these chains are hydrophilic, while others are hydrophobic. This is due to the fact that the different r-groups (the only part of an amino acids that distinguishes it from another), may or may not form hydrogen bonds with the water molecules that they are summered in. When a hydrophobic group enters the body of water, the hydrogen bonds in the water break apart, yet cannot bind to the r group on the amino acids, so the water forms bonds with itself again around the r-group, thus pushing the r-group away due to the magnetic forces that push similarly charged atoms away from eachother. However, if a hydrophilic group is exposed to water, hydrogen bonds are formed with the r-group, pulling the r-group out of the remaining protein structure due to magnetic forces pulling the two bodies together as they are oppositely charged. These two interactions cause the protein to bundle up, making it hard to perform accurate gel electrophoresis on. It becomes especially difficult when these proteins bind together with disulfide bonds. Heat and sodium dodecyl sulfate break apart the disulfide and hydrogen bonds. This allows us to separate the proteins in electrophoresis, which can then be compared. [A]

Inhabits Ocean and Coastal streams. Adults cease eating in freshwater. Die After Spawning. Migrating fry forms schools in estuaries, remain close to shore for a few months, and disperse and enter into the sea. Epilegic.

Adults are Benthic, but occasionally Pelagic. Feeds mainly one other fishes, but also eats cephalopods, large crustaceans, and other bottom-living animals. Seriously affected by overfishing

Benthic: Lives one the bottom of a body of water

Pelagic: Lives far away from land

Anadromous: Migrates from freshwater to spawn in salt-water

Lives above and below thermoclines, Pelagic in open water, rarely seen around reefs, school by size, large fish school with porpoise, sensitive to low concentrations of oxygen, resides near ocean debris

Larvae are initially systematic, but after 40-50 days, the right eye moves to its left side.

Upon the conclusion of our lab, we obtained a gel with protein bands that looked like this: 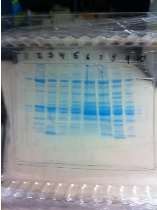 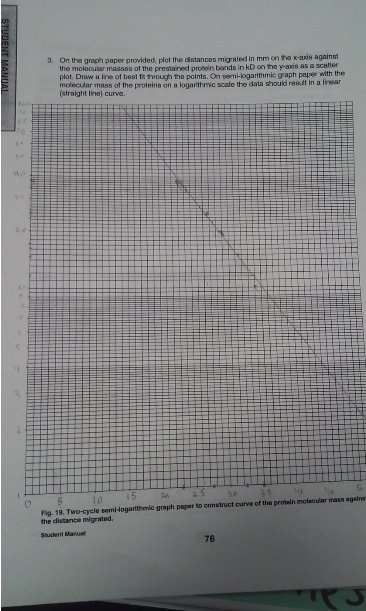 The following graph shows a standard curve based on the distance that the bars travelled and the weight of said bars:

The following table describes the distances various bands of proteins moved down their wells. We would use this information to calculate the weight of these bands by comparing them to our standard curve:[D3]

By using the band distances and the standard curves that we made, we were able to calculate the weight of these protein bands in Kilo Daltons:

By comparing the bands on the gel, our lab group made the following tables showing which fish had certain proteins in their muscles tissue.

*Each, “X” represents the presence of the mentioned protein on the left-hand side of the table in the fish

This table compares the proteins located in the chart above, and shows the similarities of proteins between the species. 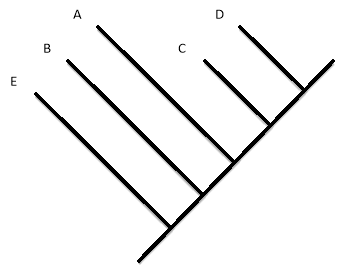 Upon the completion of the analysis of our results, we obtained the following Celptogram[D4]. We knew that Species E only shared a common protein with species B, so it needed to be on one of the ends of the Cleptogram[D5]. We also noted that species C and D shared multiple common proteins in common, so they needed to be close together on the tree. During our analysis of the proteins, our teacher identified which letter represented each fish (it had remained a blind experiment up till this point) as the following:

When reviewing the data once more, we noticed some discrepancies in our cladogram compared to the evolutionary tree. For example, our Yellow-fin Tuna found its way onto the beginning of the tree, when it should have landed near the end according to the evolution tree in our packet. Otherwise, we believe this experiment [D6]was a success, as we learned about how proteins can be used to supplement genetics and give us another tool in understanding our history. This could possibly be result of contamination in the fish muscle samples, due to touching the muscles with the same pair of gloves when transferring them into the tunes for protein extraction. If we were ever to do this experiment again, we would be sure to use tweezers of another similar tool to handle the muscles.

[D2]“Could this have been organized into a data table which contains all the fish and is still able to describe these different features of the bioinformatics?

Thank you for getting the bioinformatics in here!