Now a days Gene therapy is a well known process of treatment of various genetic and other chronic diseases whereas, most of the drugs and vaccines have been discovered till now for almost all the kinds of diseases but still some of the diseases like cancer and AIDS are incurable. Hence, Gene therapy is seeking all the attention and is much beneficial. As gene therapy is the technique that deals with the treatment or the prevention of various diseases. Besides this, Genetic Engineering is another technique which is quite useful for designing, editing or creating a manual recombinant for the sake of getting a better trait, character or expression in the desired species i.e, recombinant insulin production in bacteria.

Instead of growing human insulin in bacteria. Genetic engineering could theoretically be used to introduce the insulin gene into human cells that do not possess a functional copy. (That would still not cure diabetes unless these cells were also capable of appropriately increasing or decreasing their output of insulin according to conditions.) This type of genetic engineering is called gene therapy, the introduction of genetically engineered cells into an individual for therapeutic purposes.

Three general requirements for gene therapy, first presented in 1980 should be shown in animal studies that;

These three requisites, summarized as delivery, expression, and safety, will each be examined in turn.

These criteria are very similar to those required prior to the use of any new drug, therapeutic procedure, or surgical operation. The requirements simply state that the new treatment should get to the area of disease, correct it, and do more good than harm. Some flexibility is necessary since the criteria might be altered for a critically ill patient for whom no further conventional therapy is available. The exact definitions of what is ‘long enough to be effective’, what level is ‘an appropriate level’, and how much harm is meant by ‘harm’, are questions for ongoing discussion as more is learned about gene therapy. Ultimately, local Institutional Review Boards and the National Institutes of Health (NIH), the latter through its newly created Working Group on Human Gene Therapy, must decide if a given protocol is ready for human application. Once the criteria are satisfied, that is, when the probable benefits for the patient are expected to exceed the possible risks, then attempts to cure human genetic disease by treatment with somatic cell gene therapy would be ethical. The goal of biomedical research is, and has always been, to alleviate human suffering. Gene therapy is a proper and logical part of that effort. (Anderson and Fletcher, 2010)

Many diseases are genetically determined; for example, Huntington’s disease and cystic fibrosis (CF). Others are influenced by genes, but involve additional factors as well; for example, cancer and diabetes mellitus. Recent scientific developments make it possible for medicine to target such genetically related diseases at the molecular level, and thus offer the prospects of effective new therapies. The genes of somatic cells can be manipulated to modify a disease in an individual. If genes in germ cells are modified, a genetic disease may be prevented in progeny as well. In this essay, we will consider some of the scientific, social, and ethical issues associated with such genetic therapies. (Robert & George, 2008)

Genetic engineering is the direct alteration of individual genotypes. It is also called recombinant DNA technology or gene splicing, terms which are used interchangeably. Human genes can be inserted into human cells for therapeutic purposes. In addition, because all species carry their genetic information in DNA and use the same genetic code, genes can be moved from one species to another. (Pratik, 2007)

Despite the everyday progresses of medicine solutions for human health, today cancer is still one of the biggest challenges for humanity. Thanks to the advancements in prevention and in treatment, the survival rate has been improved in the last few years. However, cancer remains one of the main causes of death worldwide with 8.2 million of death occurred in 2012. It is estimated that by 2020, there will be between 15 and 17 million new cases of cancer every year, 60% of which will be in developing countries. In economical developed countries the burden of cancer is a result of population aging and growth as well as an increasing adoption of cancer-associated lifestyle choices including smoking, physical inactivity, and ‘‘westernized’’ diets. Cancer, as definition, is the uncontrolled growth of cells that can occur in any type of tissue and, at the late stage, these cells lose their adhesion capacities and migrate to healthy tissues. Other than surgical treatment, the different options are all based on a mechanical or pharmacological killing action against cancer cells, possibly avoiding the side effect damages of healthy cells. (Marco et al, 2015)

Nanotechnology is one of the best promises to attack cancer cells more specifically, effectively and to reduce undesired side effects. In other terms, nanotechnology can be used to transport drugs to a specific site using specific keys such as antibodies. Moreover, in the context of developing innovative theranostics, nanomaterials could be used for imaging as a diagnostic tool and, at the same time, to stimulate and control the release of drugs in the cancer site. In the recent years numerous nanomaterials have been explored for potential theranostic applications for cancer therapy thanks to their properties. Compared to traditional molecular contrast agents or drugs, nanomaterials can be engineered to improve and integrate multiple functions in a single system also to give the control of drugs release, being of hope for the building of a next generation of anticancer tools i.e, Graphene. (Shanmugam, 2014)

Gene therapy is defined as “the treatment or prevention of disease by gene transfer” and involves the genetic modification of human cells by introducing one or more new genes.

There are two types of gene therapy – somatic and germ line:

• Somatic cell gene therapy involves the genetic modification of any cells in a patient’s body apart from the reproductive cells (egg and sperm). The intention is to confine changes to the individual being treated and the parts of the body where the illness is experienced (such as the lungs with cystic fibrosis) so the genetic alteration should not be passed on to the patient’s children. Somatic cell gene therapy is the only form that is permitted in this country.

• Germ line gene therapy involves genetically modifying a fertilised egg and therefore will affect not only the individual that develops from it, but also their offspring and successive generations. 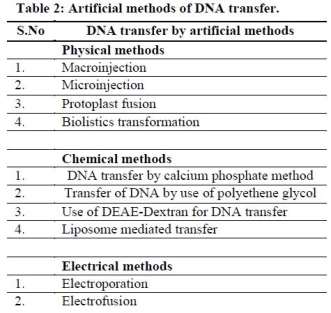 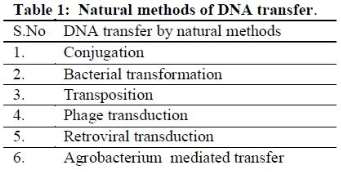 Various methods of DNA or gene transfer are as follows; (Sukharev, 2010)

At present, the only human tissue that can be used effectively for gene transfer is bone marrow. No other cells (except, perhaps, skin cells) can be extracted from the body, grown in culture to allow insertion of exogenous genes, and then successfully reimplanted into the patient from whom the tissue was taken. In the future, as more is learned about how to package the DNA and to make it tissuespecific, the intravenous route would be the simplest and most desirable. However, attempting to give a foreign gene by injection directly into the bloodstream is not advisable with our present state of knowledge since the procedure would be enormously inefficient and there would be little control over the DNA’s fate. Studies are considerably more advanced with bone.

Patients with serious genetic diseases have little other hope at present for alleviation of their medical problems. Arguments that genetic engineering might someday be misused do not justify the needless perpetuation of human suffering that would result from an unnecessary delay in the clinical application of this potentially powerful therapeutic procedure. (Anderson and Fletcher, 2010)

The ethical arguments against the use of a human germline gene therapy fall into three categories:

In recent years, a variety of techniques have been developed to identify genes associated with specific diseases. Since 1990, when the first protocols for gene therapy were approved, over 100 new research protocols have been initiated for a variety of diseases, In the case of somatic cell therapies, the nature of a particular disease and other factors determine the specific cells targeted for genetic manipulation. Target cells have included lung, liver, white blood, endothelial, and cancer cells. All research to date has involved somatic cells, and the techniques used make improbable the spread of altered genes to germ cells. However, it seems likely that we will ultimately be able to alter the genes of germ cells, so that whatever changes are made are passed on to the subjects’ progeny.

In current therapies (all of which are somatic cell), vectors are used to introduce new genetic material into target cells. Vectors are agents to which new genetic material is attached. A lot of betterment and efficiency have been observed by the implementation of the methods of gene therapy in curing disorders. Hence, gene therapy along with the genetic engineering plays an important role in the health care of human as well besides the animals and plants. The point is, it is just taken under a limitation by some of the organizations regarding to some ethical issues otherwise it is the futute treatment of all the diseases.

Gene therapy not only brings the prospect of treatments for previously untreatable illnesses, it may also enable the prevention of certain diseases through the correction of genetic disorders. However, it is clear from gene therapy under development that, in the short to medium term, most gene therapy will not be used for prevention but for developing more effective ‘genebased’ treatments for cancer and AIDS.

Although gene therapy has been heralded as a major breakthrough in medical science, it also carries the potential for abuse and for commercial imperatives, not human need, to drive its progress. The demands of industry in maintaining investor confidence may increase the dangers to patients through secrecy and poor supervision. Placing too much emphasis on genes as the determining factor in health and disease may lead to prolongation of suffering as a result of other underlying causes being neglected. It may also give rise to new insidious practices of genetic discrimination in areas such as employment, insurance and health care. Avoiding the pitfalls whilst reaping the benefits of gene therapy is the challenge for politicians and regulators. Crucially, society must not be overcome by ‘genetic determinism’ or ‘genetic thinking’ and the hype of the biotechnology companies if health care issues are to be addressed effectively.