The effect of the average training hours per week on the cardiovascular fitness of sport participants:

Frequent training is of key importance for sport participants. Regular training should increase the aerobic fitness of the performer due to increasing their VO2 max and decreasing their resting heart rate. The hypothesis suggested that an increase in average training hours per week would results in an increase in VO2 max and decrease in heart rate. This is based on the fact that ‘VO2 max is the maximum amount of oxygen that the body can utilise per minute during intense exercise’ (Elizabeth Quinn, 2011) which is said to be an accurate measure of cardiovascular fitness. Resting heart rate is also a determinant of the fitness of sport participants. The resting heart rate of those who exercise and train more frequently should be lower because less effort is needed from the heart to pump blood.(Source?) Found this as a source; can’t find a author though. http://www.nytimes.com/health/guides/specialtopic/physical-activity/exercise's-effects-on-the-heart.html Try to find a journal that says it because they prefer you to use peer reviewed sources

Fifty sport participants, 25 male and 25 female took part in the study. The experiments included measurements of each participant’s VO2 max, resting heart rate and average training hours per week in their specific sport. In addition to this, alcohol intake and whether or not the participants smoked were recorded, as all of these factors may affect the results.

Ethical issues were considered before the tests on these subjects were carried out. For example participants had given informed consent, they understood their role in the experiment, as well as having the choice to withdraw at any time. The subjects had volunteered to take part and were not pressurised to participate. If the participants had an injury or disease they would not be chosen to take part as this may have adversely affect their health during the experiment and have a negative impact on results.

VO2 max was measured using the ‘Astrand 6 minute cycle VO2 max test’ which was performed using a cycle ergometer. A heart rate monitor, weighing scales and a stopwatch were also required. Resting heart rate is the number of beats per minute when the performer is at complete rest (Elizabeth Quinn, 2011), and was measured using the heart rate monitor. Many experiments involving the measurement of VO2 max have used the Astrand cycle test such as that by R.E. Cink et al.(1981) and it was said to be successful, also a study by G. Keren et al.(1980) on the Comparison of Various Methods for the Determination of VO2 max came to the conclusion that the Astrand-Rhyming procedure can be a reliable measure for maximal oxygen consumption. Therefore this test was chosen for the investigation.

Before each participant carried out the test, the seat height was adjusted appropriately where the knee was almost straight and the pedalling position made to be comfortable for the subject. In advance to the participant took part in a 3 minute warm-up. The initial cycle work rate was set to 125 kilogram-force meter/minute. This setting was chosen as it was appropriate when looking at the age of each participant also this setting should raise the participant’s heart rate to 130-160bpm after 2 minutes cycling at 50rpm before the test starts. The participants would start the test on command and the stopwatch was then started. The performer(s) pedalled at 50rpm for 6 minutes whilst maintaining their heart rate between 120-170 bpm. The heart rate was chosen to be maintained at this range as recommended by G. Keren (1980), who is one of many others who carried out studies using the Astrand technique. He said that the procedure can only be a reliable measure for maximal oxygen consumption if done properly in the way that Astrand, (1985) carried it out so that heart rate should be kept between 120-170 beats/min. The participant’s heart rate was recorded each minute and after 2 minutes - if the participant’s heart rate was not in the target range of 120-170bpm then the work rate wattage was adjusted accordingly. The heart rate rose to a level in the target range and then levelled off, staying relatively constant during the last few minutes of exercise. After 6 minutes the test stopped and the final work rate wattage was recorded. To estimate VO2 max using this protocol, the Astrand-Ryhming nomogram was used, similar to the study by Stephen. F.Siconolfi (1985), where the nomograph technique is carried out where the heart rate (left of nomograph) is plotted and then the workload (right of nomograph), which helps find the VO2 max (middle of nomograph). Once the estimated VO2 max value had been determined the calculation-based formula was used where the estimated VO2 max value was multiplied by the appropriate correction factor (based on age).

A treadmill or a stationary bike could have been used to measure the VO2 max and it was important to stay with the same apparatus for each participant to maintain an accurate and fair test.

The mean resting heart rates and mean VO2 max of each participant (male and female) were calculated. As well as the standard deviations of resting heart rate and VO2 max, to see the number of variations that can exist from the average and to determine how numbers varied and how spread out they are.

The average resting heart and average VO2 max of each participant as well as the standard deviations:

Imran I don’t think you need the info for every subject, just the averages. Otherwise there’s too much data to read. 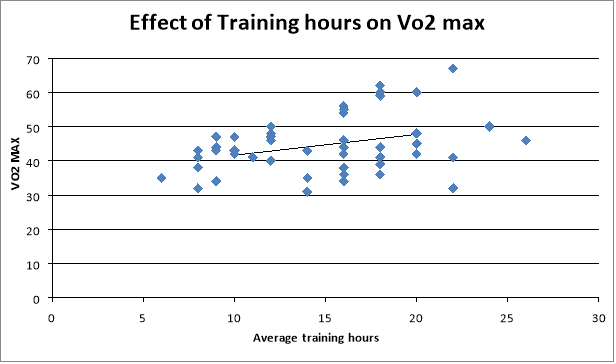 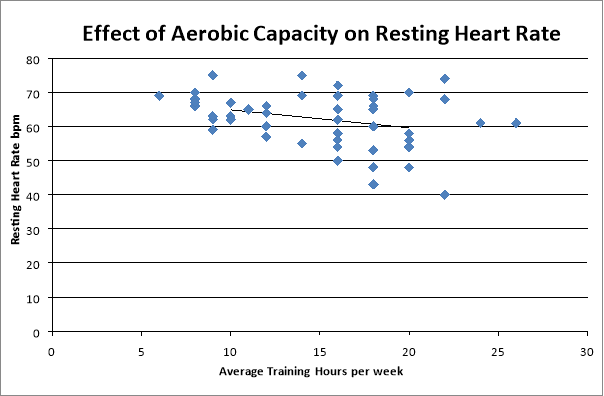 Figures 1 and 2 show that there was a large variation in results and that the results are not all close to the line of best fit, the data has anomalies, although there is a weak correlation. The variation could be down to factors such as the participants smoking and/ or having high alcohol intake, therefore affecting the VO2 max and resting heart rate. The participants may also have carried out different types of training and training in a way that was specific to their individual sports. Their activities may have been aerobic or anaerobic training and this was not taken into account.

The biggest limitation is the fact that the results are varied and not all are similar, there are many outliers, and as discussed this may be due to the differing types of training of the participants and so a future recommendation would be to carry out the experiment with a sample of participants who have preferred sports of which are only anaerobic or only aerobic.

Shannan E. Gormley et al. (2008) undertook a similar study to determine the effects of regular aerobic training on VO2 max and resting heart rate, and whether various intensities of aerobic training differentially affected VO2 max as well as resting HR and resting blood pressure. Sixty one healthy young adults took part in the study, they were matched for sex and VO2max and were randomly assigned to a moderate, vigorous near-maximal-intensity, or a non- exercising control group. Intensity during exercise was controlled by having the subjects maintain target HR. Exercise volume was controlled across the three training groups by varying duration and frequency. Fifty-five subjects completed a 6-wk training protocol on a stationary bicycle ergometer and pre and post testing.

The researchers concluded that VO2 max had significantly increased in all exercising groups ‘by 7.2, 4.8, and 3.4 ml/kg/min in the near-maximal, the vigorous, and the moderate-intensity groups, respectively’. Therefore showing that Vo2 max increases with intensity of exercise as well as frequency of exercise.

Other studies show similar results. Carleton B. Chapman and Robert. S. Frazer (1954) implies that regular exercise training increases cardiovascular function of an individual by increasing their cardiac output and therefore lowering the resting heart rate of the individual.

A trial performed by Tabata et al. (1996) showed that after two experiments involving individuals whom are also young sport participants that took part in training programmes, and that after this regular training VO2 max of these individuals increases significantly.

In conclusion, the results do not follow the hypothesis in that the data does not clearly show correlations of the effect of average training hours on the resting heart rates and VO2 max of this group of people. This however is only for this specific group of people and may be down to other factors influencing these results such as their alcohol intake, if they smoke or not, and also more importantly, what is involved in their training. One participant may be mainly focusing on agility, whilst another on strength. Furthermore, their particular sporting activity may be aerobic or anaerobic which may have affected the results also. Moreover, this sample size was small also, which means that the results cannot be generalised.

REFERENCE THE ONES BELOW CORRECTLY..

-A comparison of various methods for the determination of VO2max. Keren G, Magazanik A, Epstein Y. (1980).

VO2 max ;(use this to replace all throughout essay)

Links to do with the method/ Amstrad test;…