Water is considered essential for sustaining life due to several of its unique chemical properties such as its ability to dissolve nearly anything and its existence as three different phases; gas, liquid and solid in a narrow temperature range. Some organisms are known to require less water than others; an organism that utilises another molecule, however, has yet to be discovered (Jonathan Atteberry, 2019). For these reasons, NASA’s motto in the search for life is “follow the water”. Orbiters, rovers and landers sent to investigate Mars brought back geomorphological mineralogical and isotopic evidence of liquid water on the surface of the planet in the past. While Mars has long been known as a desert planet, new evidence and research are challenging the idea and suggesting that liquid water still flows on Mars.

Water: Essential to all Organisms 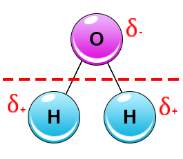 A common property in all known life forms, even single-celled organisms, is the utilisation of a cell membrane as the barrier separating a cell from its environment (Tia Ghose, 2015). In more simplistic terms, the membrane acts as a secure gate that shuts out toxic substances but makes exceptions for important materials such as oxygen to make energy. In this example, water is used as a medium to transfer substances from a cell to its environment and vice versa. This is possible as the state of water is liquid at the body’s temperature and deriving energy from a solid is harder. In addition to this, water is referred to as the universal solvent as it can dissolve almost anything, primarily due to water’s innate polarity which can be observed from its molecular structure. As seen in figure 1, the hydrogen atoms in a water molecule are clustered on one side such that an uneven distribution of the molecule’s charge is generated, resulting in a positive hydrogen region and a negative oxygen region. The positive end attracts negative ions and vice versa allowing water to efficiently transport ions such as calcium and phosphates in and out of cells. Furthermore, water also flushes out toxins and is essential in regulating body temperature and aiding metabolism.

Water is naturally found as a solid, liquid and gas on Earth as it exists as the three phases in a narrow temperature range. Solid ice can be found as icebergs in the ocean and frozen glaciers through mountains while liquid water makes up the oceans that cover 71% of the Earth’s surface and gaseous water vapour exists in our atmosphere warming the temperature. The evaporation of liquid water into water vapour allows water to be distributed across the planet in the form of rain. As the three phases of water exist in such a narrow temperature range, it presents more opportunities for life to flourish. While other molecules were considered as possible alternatives for sustaining life, they were commonly found to exist as a liquid at hostile temperatures and pressures.

While water is essential to all known life forms, there has been speculation that another molecule could sustain life. Scientists, while currently unsure over this theory, have found a list of possible alternatives to water regarding sustaining life. Ammonia and formamide were both considered as possible alternatives; however, each had reasons suggesting that it could not sustain life (Jonathan Atteberry, 2019). It is almost certain that at the very minimum, a liquid is essential to all life sources, and ammonia is found as a liquid at extremely cold temps. While possible, it is highly unlikely to find an organism in this temperature range as it would require an immense amount of energy to support the metabolism of the organism. Formamide, however, stays in liquid form over an even larger temperature range than water and is also a solvent to many substances. Despite this, it is being doubted due to the little evidence supporting that it can sustain life. While there may be a chance that life can exist without water, the probability of this being true is low as we are yet to discover an organism that can survive without water. Due to this, scientists are choosing to focus on finding water regarding finding a planet that can sustain life.

Evidence of Liquid Water on Mars in the Past

Following the success of the orbital spacecraft, Mariner 9, Viking 1 and 2 were sent to further investigate the surface of Mars as a lander. From examining the pictures taken from Mariner 9, the initial landing site for Viking 1 was chosen however had to

be changed upon photographic evidence from Viking 1 showing “a deeply incised riverbed,” according to On Mars, a NASA History Office publication. Having a much higher resolution camera to Mariner 9, the Viking spacecrafts, while in orbit, provided more evidence that there may have been water on Mars. The photos showed valleys carved by water, eroded grooves and channels that hint that floods may have appeared on the surface of the planet. Photos of volcanoes also suggested the presence of rain due to their similar appearance to the volcanoes in Hawaii.

The landers equipped with gas chromatograph-mass spectrometers analysed samples from two separate landing sites. All the samples, which were heated to a high temperature of 500 degrees Celsius, contained a small amount of water. Other chemicals found also suggested the presence of water such as chlorine and sulfur, which remain after seawater evaporates. Sulfate, which was also found as a small amount in the sample, contains water chemically bound, also suggesting water was found on the surface of Mars in the past.

NASA, in 1994, launched a new program designed to explore Mars every 26 months from 1996 to 2005 called the Mars Surveyor Program. The program began with the Mars Global Surveyor, a spacecraft that took high-resolution photos of the surface of Mars, which provided solid evidence for liquid water being present at or near the surface of the planet. In 2006, photos taken by the spacecraft suggesting the presence of liquid was released to the public by NASA. The photos show two different craters with gullies that could have recently been formed by liquid water.

Another orbiter, the Mars Odyssey, provided evidence that a large amount of water is currently on Mars in the form of a solid rather than a liquid. The Gamma Ray Spectrometer on the orbiter was used to analyse the elements present on the surface of Mars and detected hydrogen-rich regions of soil, indicating the presence of solid water (ice) within a meter of the surface of Mars (NASA, 2002). The regions studied were also found to have a low enough temperature to hold ice stably, further solidifying the theory. Phoenix, a lander sent to Mars following this discovery, confirmed the theory by finding ice a few inches below the surface of the planet. This discovery reinforced the theory that vast amounts of liquid water once ran across the surface of Mars. 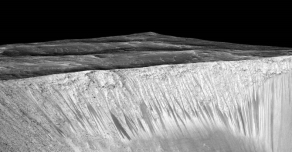 The Mars Reconnaissance Orbiter that provided evidence of hot springs existing on Mars in the past also provides strong evidence for liquid water being currently present on the planet (NASA 2015). Dark streaks seen on slopes of the planet were analysed using a spectrometer and hydrated minerals were discovered. A unique feature of the streaks is their seasonal change in appearance. With a temperature over -23 degrees Celcius, the marks were seen to darken and appear as if they flow downhill and would disappear if the temperature reached any lower.

The downhill slopes are referred to as recurring slope lineae and have long been discussed concerning the possibility of liquid water. The discovery of hydrated slopes is an indication of liquid water currently flowing on the surface of the planet. NASA scientists have explained that the hydrated salts lower the freezing point of a liquid brine to create a shallow subsurface flow. While the precise cause of the streaks is unknown, scientists are sure that water plays a major role in the formation of the streaks.

The first large body of water on Mars was recently discovered by the European Space Agency’s Mars Express Orbiter (Mary Holton, 2018). A radar instrument known as Marsis on the orbiter is used to analyse the surface and subsurface of the planet. A reading of an ice cap on Mars’ south pole showed the presence of water underneath the outer layer of ice and while Professor Roberto Orosei from the Italian National Institute for Astrophysics has described it as “probably not a very large lake,” it is estimated to be a minimum of one metre thick.

Scientists adopt the mentality of “follow the water” when searching for planets capable of sustaining life as water is known to be essential for the survival of all organisms. The most explored planet omitting Earth, Mars shows evidence of previously having liquid water flowing on the surface of the planet. The evidence comes in the form of photographs, spectral graphs and other data collected by spacecrafts sent to Mars. Recent discoveries have proven that there is currently liquid water on Mars; however, a large portion of it is subsurface hidden under a slab of ice.