In an attempt to develop an effective and safer anticancer agent, 3-(4-chlorophenyl)-4-sydnonecarboxaldehyde 5 have been designed and synthesized under ultrasonication by formylation of 3-(4-chlorophenyl)-sydnone 4 and characterized by spectral studies. The ultrasonic method of synthesis was found to be simple, ecofriendly, reduces reaction time and gave good yield when compared with traditional methods of synthesis. Anticancer activity of the compounds were tested against 60 human tumor cell lines and compared with standard drug Vincristine sulphate. Cytotoxicity evaluation revealed that compound 5 is most potent against NCI-H23 (Non-Small cell lung cancer) with comparative activity of Vincristine sulphate. Compound 5 also had shown moderate cytotoxicity against T-47D (Breast cancer), CAKI-1, UO-31 (Renal cancer), HL-16TB (Leukemia), NCI-H23, NCI-H522 (Non-Small cell lung cancer), SNB-75 (CNS cancer), MALME-3 (Melanoma). In future, research and modification of compounds to different derivatives may lead to development of potent anticancer drug.

Mesoionic sydnone compounds have shown a variety of biological activities including antitumor ((Kier et al., 1964, Dunkley et al., 2003, Satyanarayana et al., 1995, Kavali et al., 2000, Dunkley et al., 2003, Fregly et al., 1964, Stewart et al., 1965, Roche et al., 1965). It is thought that the ionic resonance structures of the heterocyclic ring promote significant interactions with biological molecules. In 1992 a series of 4′-substituted-3′-nitrophenylsydnones were synthesized and evaluated by Grynberg et al for anticancer activity and it was found that the 4′-chloro and the 4′-pyrrolidino compounds significantly enhanced the survival of Sarcoma 180 (S180), Ehrlich carcinoma (Ehrlich) and Fibrous histiocytoma (B10MCII) tumor bearing mice(Dunkley et al., 2003). It was also found that the larger hetero rings; p-piperidino and p-morpholino, were less potent (Kier et al., 1964, Dunkley et al., 2003). Herein we report the design, synthesis, and biological evaluation of two para-chloro substituted analogues of sudnone molecules 4 and 5. These were tested for 60 human tumor cell lines at the National Cancer Institute for antitumor activity at a minimum of five concentrations at 10-fold dilutions.The synthesized chloro substituted sydnones (4 and 5) passed the primary assay by inhibiting the growth of at least one cell line to less than 32%, and both are proved to be moderate active and versatile against each cell line.

All chemicals and reagents were purchased form from Sigma-Aldrich, Mumbai, India. Melting points of the intermediates and the final products were recorded using a Systolic melting point apparatus and are reported uncorrected. Thin layer chromatographies (TLC) were performed on E-Merck precoated 60 F254 plates and the spots were rendered visible by exposing to UV light. Infra red spectra were recorded in KBr discs using Jasco FTIR 1460 Plus spectrometer. NMR spectra were obtained on a BRUKER AVANCE II 400 NMR spectrometer at 500 MHz for 1H and 125 MHz for 13C, the chemical shifts are expressed in δ (ppm) downfield from tetramethylsilane (TMS). Electron impact mass spectra were recorded on WATERS, Q-TOF MICROMASS (LC-MS) instrument. Elemental analyses (C, H, N) were in full agreement with the proposed structures within ±0.4% of the theoretical values. The ultrasonic irradiation was performed by using a Biotechnics India TM ultrasonic cleaner bath, model 1510, AC input 115 V, output 50 W, 1.9 liters with a mechanical timer (60 min with continuous hold) and heater switch, 47 KHz. 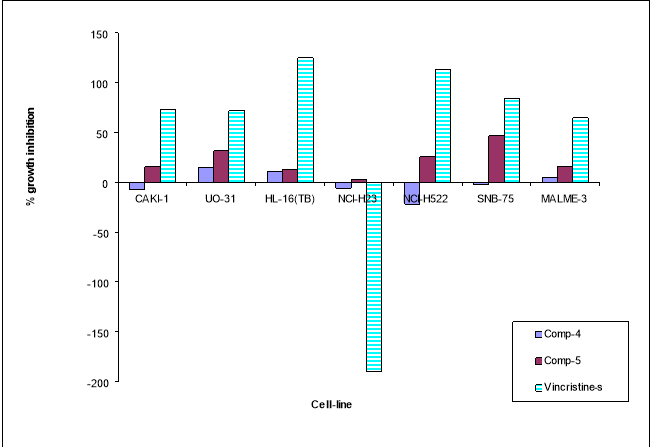 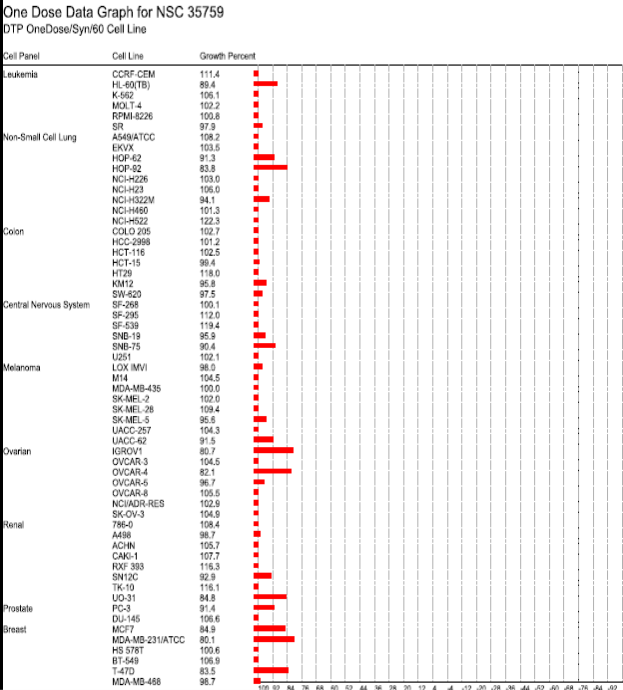 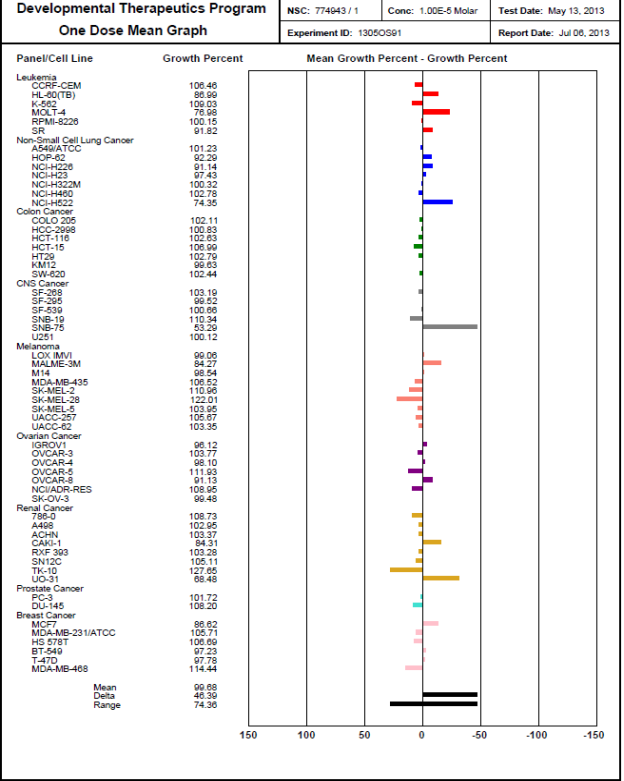 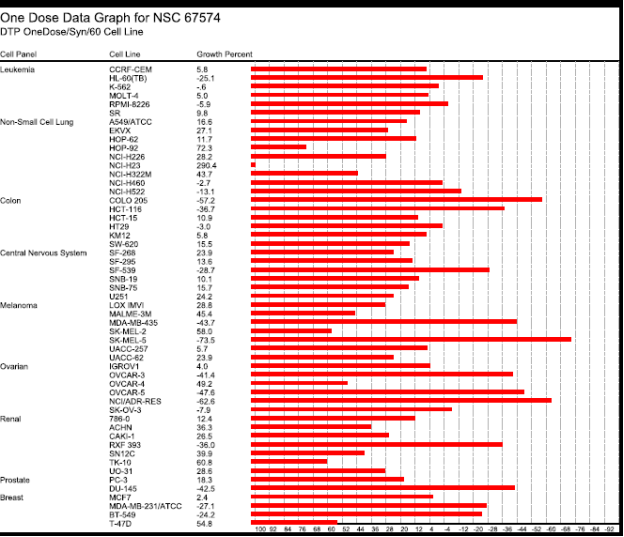 In the process of anticancer drug discovery, to find new potential anti-lung cancer agent, we designed and synthesized molecule 5. As compund 5 showed highly cytotoxicity against NCI-H23 cell line (Non-Small cell lung cancer) in comparision to standard drug Vincristine sulphate, in future, research and development with designing desired modifications of molecule 4 and 5 may develop in safer and effective potential anticancer molecules.

COMPETING INTERESTS The authors declare that they have no competing interest.