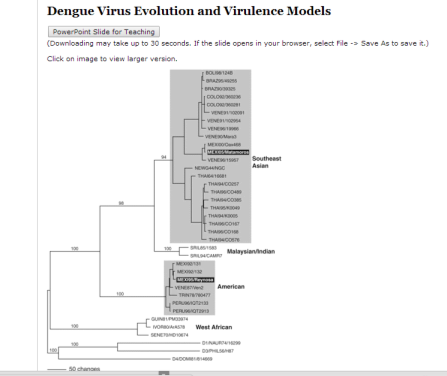 The virus is transmitted through a biological vector to human bloodstream from mosquito bites. The arthropod vector is Aedes mosquito mainly Aedes aegypti that is common in tropic or subtropics regions (Byron et al., 2009). Aedes albopictu is another mosquito vector. The mosquito that has acquired the virus can transmit it to uninfected human for the rest of its life (). Human being are the reservoir for the virus, mosquito bite an infected human to obtain the virus which it will transmit to another human being who will now become a carrier () Another reservoir is monkey in the DENV virus sylvatic cycle. The virus is found in the mosquitoes salivary gland and can also be transmitted from adult mosquito to its egg making it preserving the virus from season to season (Rolland, 1995) 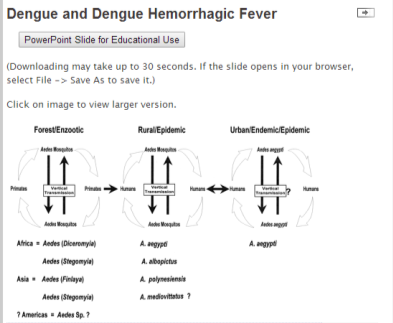 Pathogenesis of the Dengue virus (DENV)

Lack of animal models results to lack of knowledge of the actual pathogenesis of the virus but it anticipated it is multifactorial (Bryon, 2009).Dengue fever virus have four serotypes (homology of surface antigen) which make it hard for the immune system to combat and this is the basis of it virulence(Ross, 2010; Limon et al., 2005). Host genetics and background, viral genetics and host immune status determines the pathogenesis and how the immune system reacts (Sierra et al., 2007; Quinlivan, 2007; Tanaka and Mizokami, 2007; Byron et al., 2009). Once the virus access the body system through the skin epidermis Langerhans and keratinocytes cells are initially infected. However the immune system responds by producing antibodies that stick structural protein while inactivating the virus and hindering macrophage infection by the virus. At this point primary infection occurs which is the dengue fever. However antibody adherence does not inactivate the virus, viral replication occurs by attaching to the cell surface entry inside the cell cytoplasm and translation of viral proteins (Rothman, 2010; Byron et al., 2009). Subsequently the virus enters the blood stream and results ( primary viremia) where it will attach various tissue macrophages in various organs likely macrophages within the spleen (Bracken, 2005; Byron et al., 2009). As the virus replication expands to macrophages, monocytes, liver cells, bone marrow, the viral load of DENV increases (Chang et al., 2002; Burke and Kliks, 2006). Viral replication efficiency determines the viral load which can be measure in blood to determine the severity of the infection (Hesse, 2000; Halstead, 2003; Green and Rothman, 2006; Byron, 2009). Infected cells die through apoptosis and to some extend by necrosis (Byron et al., 2009; Chakravarti et al., 2006). Necrosis causes release of toxins which triggers coagulation and fibrinolytic systems. Based on bone marrow stromal severity of infection, IL-6, IL-8, IL-10, and IL-18 levels hemopiosis is inhibited reducing blood thrombogenicity (Byron et al., 2009; Chao et al., 2009). Viral load and viral tropism will increase resulting to severe thrombocytopenia and platelet dysfunction which cause capillary fragility, easy bruising and also gastrointestinal mucosal bleeding which are features of DHF while the infection triggers development of specific antibody and cellular immune response against DENV (Nachman, 2008; Chang et al., 2002). Ig antibodies bind to the virus during secondary infection thereby eliciting the infection by increasing the viral load (Nachman, 2008; Byron et al., 2009) If another different serotype invades the body, the immune system combats it the same way as it did previously due to minor difference present within various serotypes (Bryon, 2009; Huerre et al., 2001). Moreso, the dengue viruses have M proteins that assist in apoptosis of their target cell. Furthermore upon macrophage invasion, DENV, it triggers the pro-inflammatory cytokines release as well as other mediators by antigen presenting cells, cross reactive T-cells of low and high avidity, HLA and endothelial cells of the immune system which compromise abnormal homeostasis and tissue permeability (Byron et al., 2009; Carlos et al., 2005). This slows down virus elimination and can cause a more severe secondary infection, such as DHF or DSS (Byron et al., 2009). 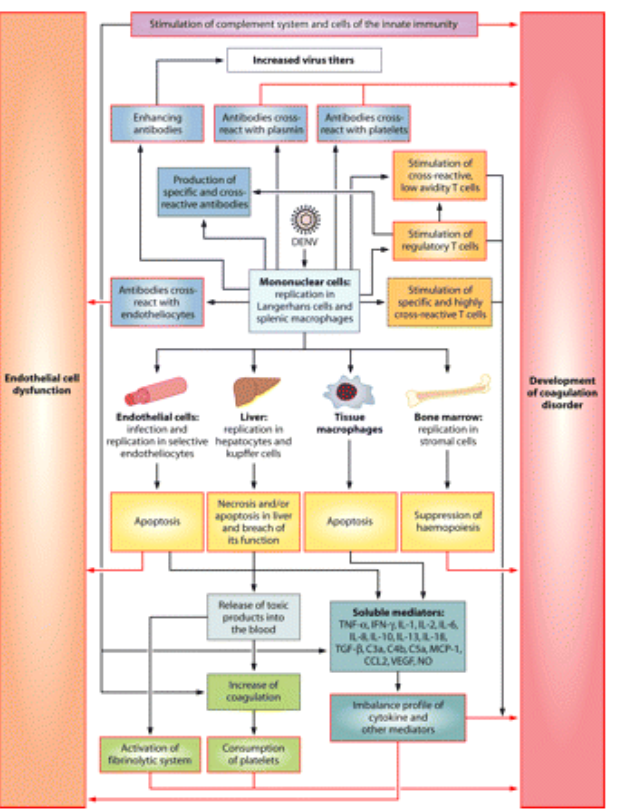 Dengue fever is diagnosed based on the clinical symptoms. Test and examination to identify the DENV can be done through antibody titre of the DENV (Jesse et al., 2004; Hesse, 2007). Another method is by doing a white blood cell count which is very low in infected patient (Jesse et al., 2004; Hesse, 2007; Ross 2010).Blood test to detect DENV via serology and ELISA to identify IGM antibodies (Hesse, 2007; Byron et al., 2009; Whitehorn et al., 2011). Carrying out a liver function test (ALT and AST) which is elevated in infected individuals (Byron et al., 2009).

Currently there is no vaccine against the dengue fever virus but there is ongoing research to develop vaccine against the virus (Byron et al., 2009). One promising vaccine been worked on is a live attenuated virus vaccine named West Nile virus, which is measles based virus to eradicate dengue (World Health Organisation Media Centre, 2002). This vaccine have been used in Thailand although there is no evidence that it can combat all four serotypes of dengue in order to avoid complications of dengue fever (DHF and DSS) (Argawal et al., 1998; Byron et al., 2009; World Health Organisation Media Centre, 2002).

Dengue fever has re-emerged since 20 years ago accompanied by an expansion in geographic distribution thereby increasing the epidemic, moreso with the upcome of hyperendemicity (Debarati and Schimmer, 2005). An estimation by the World Health Organisation of about 2.5 billion people are affected by the dengue virus each year. World Health Organisation estimated, that yearly there are 50-100 million cases per year with more than 500 000 cases of hospital admission with 15,00 deaths (World Health Organisation, 2002; Debarati and Schimmer, 2005 ). Dengue fever endemic has increase from 9 countries in 1970 to 100 countries currently (Debarati and Schimmer, 2005; World Health Organisation, 2002 ). The first dengue fever epidemics occurred in 1779-1780 in continents like Africa, Asia and South America (). Recently in 1998, there was a pandemic in United States resulting to less than 1% fatality rate. The mortality rate ranges from 1-10 % (Debarati and Schimmer, 2005; Byron et al., 2009). Increasing expansion of the disease all over the world is due to increase in population as well as lack of vector control programs (Gubler et al., 2004; Hesse, 2000). However due to control and preventive measures the number of cases is increasing from travellers who are carrying the virus from high risk areas such as sub-tropical and tropical region (Byron et al., 2009). 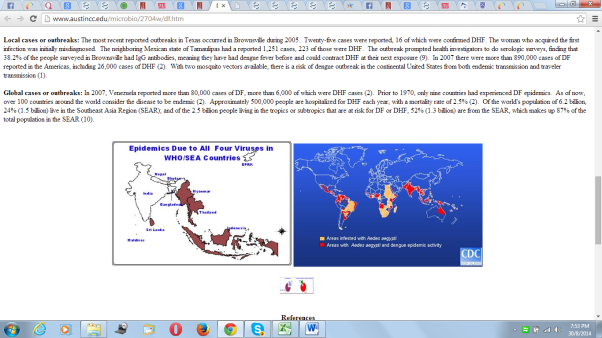 In Venezuela, 2007 there was an outbreak of 80,000 dengue fever cases in which 6,000 persisted to DHF. In the same year above 890,000 cases were reported in America of which 26,000 persisted to DHF the route of transmission being endemic and from travellers ( Byron et al., 2009; World Health Organisation Media Centre, 2002). Most recent outbreak occurred in 2005 in Brownsville Texas with 25 reported cases and 16 DHF (Whitethorn et al., 2011) The virus was also transmitted to neighbouring state Tamaulipas where there was 1251 case reported in which 223 had DHF (Bebarati and Schimmer, 2005; Whitehorn et al., 2011).