How would a tsunami affect Christchurch?

The effects of a tsunami on Christchurch and the surrounding areas would be devastating. Depending on where the tsunami is generated the damage will vary. The risks of a tsunami occurring in Christchurch are relatively low, but there is still a small risk. The highest risk of a tsunami is generated off the coasts of South America, caused by the Nazca plate colliding with the South American plate. These two plates have caused many large earthquakes and tsunamis. Chile’s 2010 8.8 magnitude earthquake caused a 2.3 – 2.6 meter tsunami to hit the coast of Chile and Peru. This tsunami travelled across the pacific ocean and reached New Zealand. Authorities stated they did not expect the tsunami to reach New Zealand but later issued a warning stating that waves of up to 1 meter could hit the coasts. Waves were recorded above 0.5 meters in some areas. The Heathcote and Avon estuary in Christchurch received waves of up to 0.50 meters and surges past 1 meter. Lyttleton which is not far from Christchurch experienced surges over 2 meters, luckily it was low tide and the water didn’t break its banks.

Small tsunamis, non-destructive and are undetectable without specialized equipment, happen almost every day as a result of minorearthquakesand other events. They are very often too far away from land or they are too small to have any effect when they hit the shore. When a small tsunami comes to the shoreline it is often seen as a strong and fast-moving tide.

Tsunamis have long periods and can overcome obstacles such as gulfs, bays and islands. These tsunamis make landfall usually in the form of suddenly decreasing and then rapidly increasing water levels, a combination of several large waves in session. Generally tsunamis arrive, not as giant breaking waves, but as a forceful rapid increase in water levels that result in violent flooding. However, when tsunami waves become extremely large in height, they savagely attack coastlines, causing devastating property damage and loss of life. A small wave only 30 centimetres high in the deep ocean may grow into a monster wave 30m high as it sweeps over the shore. The effects can be further amplified by bays, and harbours acting as a funnel for the waves to move inland. Large tsunamis have been known to rise to over 50 meters, although this clearly never occurred in New Zealand.

The initial wave of a huge tsunami is extremely tall, however, most damage is not sustained by this wave. Most of the damage is caused by the huge mass of water behind the initial wave front, as the height of the sea keeps rising fast and floods powerfully into the coastal area. It is the power behind the waves, the endless rushing water that causes devastation and loss of life. When the giant breaking waves of a tsunami batter the shoreline, they can destroy everything in their path.

Destruction is caused by two mechanisms: the smashing force of a wall of water traveling at high speed, and the destructive power of a large volume of water draining off the land and carrying all with it, even if the wave did not look large. The energy tsunamis carry with them is massive.

People living near coastal areas are advised to have an evacuation plan in place. If a local tsunami was to occur there would only be a few minutes to escape to higher ground. The violent force of the tsunami results in instant death, most commonly by drowning. Buildings collapsing, and electrocution, also floating debris is another cause of death.

What evacuation plans are in place for Christchurch?

Official warnings will be announced via TV and radio.

The following are official radio stations that the warning will be issued on: 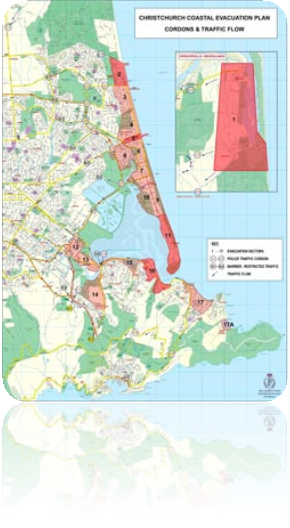 Twenty-two sirens have been installed from Waimairi beach to Sumner beach. The warning system has been installed and working since July 1st 2012. These sirens will only be used for regional tsunamis that take 2 or more hours to reach the coasts of Christchurch. For a local tsunami the council and police have plans in place. The Christchurch city council highly suggest you have your own personal evacuation plan in place, especially if you are disabled or caring for someone with disabilities. It is advised to get at least 15 meters above sea level, travelling a few blocks inland or getting on top of a cliff, try and take shelter in a two story building if you do not have enough time to go inland or get to higher ground. Tsunami waves can travel twice their height up a wall or cliff, this is why it is advised to be at least 15 meters above sea level.

Are the sirens loud enough and is there enough warning systems?

Twenty-two sirens have been installed from Waimairi beach to Sumner beach. Some Christchurch residents are calling the city’s new tsunami warning system a “dud”. The $550,000 sirens had been installed on the coastline between Waimari Beach and Sumner. Residents along the coast reported that the system sounded faint. However, Civil defence and emergency management manager Murray Sinclair said the sirens were only meant to be heard up to 600 metres away from the coast, and were not designed to penetrate walls. The sirens are set at 85 decibels, which was the balance between having as many people hear it as possible and preventing anyone nearby from suffering hearing damage. Although many people had to block their ears when standing outside as it was too loud. The reason for the sirens only operating at 85 decibels as any louder and peoples hearing will be damaged. Sound is measured in units called decibels. Sounds louder than 80 decibel will cause hearing damage. 75 db will not cause hearing damage, even after a long time exposed to it; it is unlikely to cause hearing loss. Repeated sounds above 80 decibels for long periods of time will cause hearing loss. The higher the decibel, the less time it will take for hearing loss to occur. Hearing loss happens when you are over exposed to loud sounds. Sounds over 110 decibels will cause immediate damage to your ears. Inside the ear there are microscopic hair cells found in the cochlea. When exposed to loud sounds these hairs become damaged. These cells respond to sound vibrations by sending a chemical signal to the auditory nerve. The reason being that you lose higher frequencies first is because these groups of cells are more sensitive to louder sounds and therefor are damaged more easily. The human ear can hear sounds in the range of 20Hz to 20,000 Hz. With age and time, the cell’s stereocilia become damaged and broken. Hearing loss results when the hairs become damaged. Once these cells are damaged they cannot grow back, that is why it is important to protect your hearing.

The 85 Decibel sirens are designed to be heard up to 600 metres away. By moving away, the decibel level of a sound will decrease by 6dB every time you double the distance from the sound. The Inverse Square Law has taught us that for every doubling of the distance between a sound source and the recipient, the sound drops by 6db. At 1 metre is 85db then at 2 metres the sound will be 79db, 4 metres will be 73db, 8 metres will be 67db, and so on. That would mean at 600 metres the sound would be 30db, this is without considering the factors of weather, humidity, and temperature. Wind would also affect how far sound could travel. Wind currents can alter or distort the sound waves, which travel by compressing and decompressing the air particles. Winds and other airflows can disrupt that action and distort the sound, either by altering its volume so it will sound louder or nearly non-existent, changing its direction slightly, or even altering its frequency.