Installed cost and performance levels of renewable energy plants are similar around the world, although no single figure can quantify the precise cost and performance of any renewable technology. The location where the technology is installed plays a major role in providing the energy resource for renewable energy technologies. Solar installations close to the equator have more energy production capability. Wind energy variations are more extreme, windiest regions are favorable to install wind turbines that generates significant amount of electrical energy such as New Zealand and United Kingdom (Freris and Infield, 2008).

Table 3.1 shows the main parameters related to renewable energy technologies and conventional plant. It also indicates the three major components of energy generation cost which are: (1) the cost of the plant, land acquisition, grid connection and initial finance cost, (2) operation and maintenance cost (O&M) and finally fuel cost. From the table it is noticeable that most of the renewable energy technologies have zero fuel cost and it varies in conventional plant.

Table 3.1: Comparison of cost and performance data for renewable energy and conventional plant (Freris and Infield, 2008)

The LCOE method is concept from reality and is used as a ranking tool to measure the cost-effectiveness of various energy generation technologies. Where CF is the capacity factor; OC is the overnight construction cost; CRF is the capital recovery factor; OMC is the series of annualized operation and maintenance costs; FC is the series of annualized fuel costs; r is the discount rate and T is the economic life of the plant.

Solar radiation is a finite and free source of energy but despite that, there is cost for utilizing this form of energy. The calculation of the cost of solar energy can be made in the following manner. Assuming the solar system would have a specific lifetime of T years at initial cost of C0 Dollar. The amount of energy the system can generate during the lifetime of the system is Q (Goswami et al., 2000). The unite cost of energy, neglecting the interest charges, is equal to the cost of the installation divided by the total energy generated during the lifetime as it is shown in Equations 3.2:

For example if the solar energy collector cost $200/m2 , has an expected life of 20 years, and is installed in a location where the mean annual horizontal surface irradiance is 300 W/m2 averaged over 24 hours, the cost of solar energy Cs will be equal to:

However it is clear that no solar energy collector can perform at 100% efficiency. According to thermodynamic laws only a fraction of incident energy can be transformed into useful heat. Assuming the efficiency of the collector Æžc is 40 percent, the cost of solar will be given by Equation 3.2:

The efficiency of photovoltaic device plays a major role in the cost of the technology as we notice from the previous equation along with the optic of the device. The price of photovoltaic materials is usually expressed on a per-unit-area basis but the units are often sold based on cost per watt that is generated under peak solar illumination conditions. Equation 3.4 is used to convert the cost per square meter to cost per watt for photovoltaic technologies:

The return on investment made for specific equipment or material used for the photovoltaic system also is estimated. The payback time of PV unite of cost $/m2, is associated with the efficiency of the system, the installation location and the price of at which electricity generated is sold on the market $/kWh. Equation 3.5 is used to estimate the payback time which is:

The generate a significant quantity of energy in commercial application, several elements should be mainly considered such as the average illumination, cost of land, batteries, support structure and the life time of the PV unite. Balance of system (BOS) cost must be considered and it includes the mounting, wiring, operation cost and maintenance cost. The cost of electricity generated by solar cells can be calculated using Equation 3.6a and Figure 3.1 illustrate breakdown of the cost in PV system. 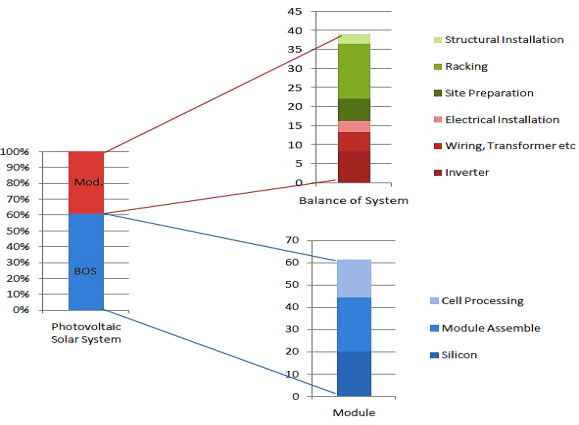 Inserting the relevant terms, in Equation 3.6a and it becomes:

The amortization rate is estimated from the real discount rate of i, and a PV lifetime, N, as shown in Equation 3.7:

The wide variety of photovoltaic panel’s technologies competing in different energy markets was a major role in the rapid growth of solar energy technologies in a short period of time. For instance, large–scale photovoltaic panels and concentrated solar power technologies are competing with other technologies that seek to serve the centralized grid. Whereby on the other hand, small-scale solar systems compete with other types of technologies such as; diesel generation sets and off-grid wind turbines (Timilsinaa et al., 2012). Along with the variety of PV technologies, with the advancement of science and technology sector, the efficiency and power generation capacity of solar technologies have been improved to generate electricity that can compete with the conventional sources power plants.

Photovoltaic technologies have been experiencing, the price of PV models haven been steadily decreasing during the past few decades. A lot of elements such as; Technology improvement using lower cost feedstock’s, efficiency increases, thinner solar cells, reduction in technical losses and increased manufacturing through had played a major role in decreasing the cost of PV modules throughout the years (Sioshansi, 2011). Figure 3.2 shows the declination in photovoltaic panel’s price per watt from 1978 until 2012. 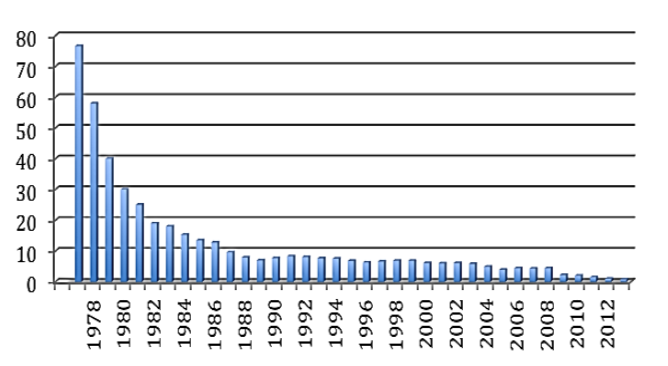 Photovoltaic technology system have no moving parts, this property reduces the cost of PV modules significantly along with the minimum operation and maintenance costs (mainly to remove the dirt and dust off the module) which is around 0.5% of the capital investment per year. The cost of PV unit presently is 60% of the total cost of PV system cost and the remaining 40% is covered by the structures, inverters and cabling costs (Aswathanarayana et al., 2010).