What if we could simply print a bone when we have a shattered one? This has now become possible due to the three-dimensional (3D) printing innovation.

In our days, technology is advancing at a very rapid pace. Out of the many recent innovations is the three dimensional (3D) technology. It has been exploited in various industries such as the movie production, television, computers, and printers industries. This technology has just recently been introduced into the medical field, more specifically, the 3D printers (Walker A, 2013). There are various medical applications of the 3D printers; some of these are to print prosthetic limbs, and implants. So far, there are many advantages, yet also a few disadvantages to the latter.

The three dimensional technology relies on the fact that we see things in 3D by our eyes in our daily, that is we visualize objects by their width, length and depth (3deyehealth.org June12, 2014). The process by which our eyes perceive three dimensional images from two highly similar overlaid images was first described by Sir Charles Wheatstone in 1838 (Sniderman Z, 2011). Another name for 3D is stereoscopy; it explains how our eyes and our brain create an impression of a third dimension. Our eyes are approximately 50-75mm apart, hence each eye perceives a slightly different image which the brain merges using some high powered geometry which is basically the 3D concept (Sniderman Z, 2011).

Modern 3D technology is trying to replicate what the brain does to merge the images. This technology tricks the brain in order to perceive two different images from the same source (Wong KV, Hernandez A, 2012).There are multiple uses of the 3D technology, mainly architecture, the movie industry, printing and gaming (Sniderman Z, 2011). 3D printing has recently been on the rise, these machines are able to make anything from simple materials. By doing so they replace traditional factory production lines and make everything in life much easier, a person can easily print a cup or chair, or even a house (Walker A, 2013).

There are various 3D printing technologies being used, namely selective laser sintering (SLS), fused deposition modeling (FDM) and stereolithography (SLA) (Pravas VS, 2013). The SLS printers use a very powerful laser in order to heat and bind the printing material into the required 3D object by scanning the cross sections generated from the 3D digital file. When each cross section is scanned, the powder bed is automatically lowered one layer thickness and new material is placed above it. The object is surrounded and supported by the same powder it is made from. This process is repeated until the object is complete (Deckard C, Beaman J, Bourell D, 2012). 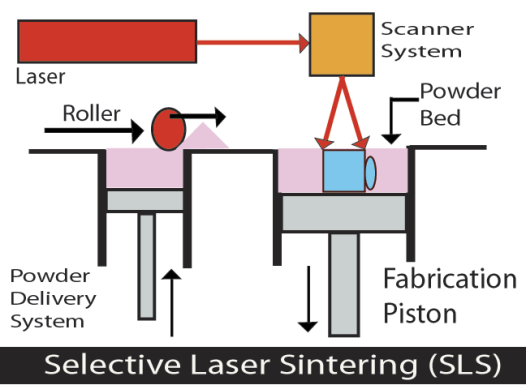 The second type is the FDM printers, these printers use a process by which thick filaments are melted and forced through a heated nozzle which forms the object. Once the first layer is formed, the base is lowered and the second layer begins forming and fusing with the first layer. However unlike the SLS, these printers require two different materials, the thick filaments in order to make the object and a support material which surrounds and supports the object while it is being made (Deckard et al., 2012). 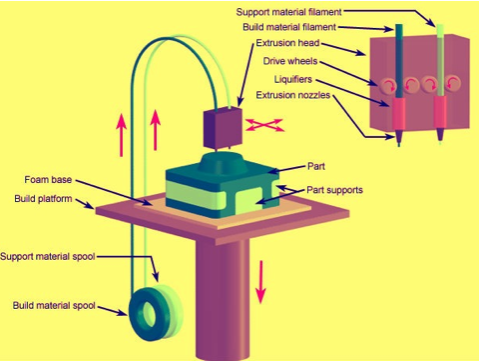 The last type of printers are the SLA printers, these printers use liquid photopolymer resin as the basic material. Photopolymers are materials that are sensitive to light, once exposed to ultraviolet (UV) light, they will immediately harden. The UV laser beam traces a cross section of the object onto the resin, which immediately curs when it is exposed to the light (3ders.org, March 14, 2013). The base then lowers and the top is coated with more resin which again gets exposed to UV light hence hardens and mends to the lower layer. This process is repeated until the object is completed (Deckard et al., 2012). 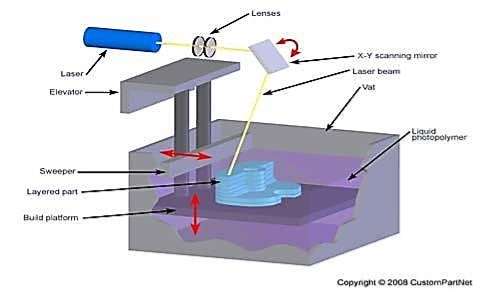 The latter are all additive manufacturing processes which require the help of computers. The 3D object blueprint to be printed must first be modeled three dimensionally on a computer software, most commonly using the computer aided design (CAD) software. Magnetic Resonance Imaging (MRI), as well as computed tomography (CT) scan can also be used (Pravas VS, 2013). The CAD file is converted into a Standard Tessellation Language (STL) file which transforms the geometry into small triangles, a header, or a triplet list of x, y and z coordinates. This file is then sliced into cross sections exactly as the printer will print, this file is called a G-Code file which can now be directly interpreted by the printer (Wong KV, Hernandez A, 2012).

There are various applications to 3D printing, such as architecture, automotive, engineering, fashion and numerous others. However the most important applications are the use of 3D printers in medicine to produce implants and prosthetics (3dprinterplans.info, 2014, June 12). Throughout the world, poverty is increasing and living costs as well as the medical costs are also increasing. A prosthetic arm for an amputee would cost on average $3,000 to $30,000 depending on the patient’s age, activities, profession and his health hence making it impossible for anyone except the rich population to be able to buy a prosthetic arm or foot (Turner R, 2009).

Lucky for the third world countries people, as well as the middle class people, a novel technology will solve the latter issue. The innovation of the 3D printers has and will change many lives. The process of printing a prosthetic hand relies on the FDM technology. The material used is most often high-performance thermoplastics which are biocompatible, and the average price of a 3D printed prosthetic arm is about $200 (Stratasys Ltd, 2014, June 12). The 3D production of prosthetics is not only cheaper, faster and more practical, it is a revolution which allows every amputee of living a normal life again.

The main problem in producing a prosthetic arm or leg is the need of a blueprint or prototype. The patient’s limb is scanned using a CT scanner or a laser-based scanner, this image is then converted into a G-Code file which can be directly printed by the printer in order to produce a new very similar limb (Andrews TM, 2013). There was also a problem of printing the socket (the part that will be attached to the amputated limb) accurately (Stratasys Ltd, 2014, June 12). However this has all been solved by the open end prototypes and blueprints available for everyone to use (Stratasys Ltd, 2014, June 12).

Sydney Kendall is a thirteen year old girl from St.Louis, her right arm was amputated due to a boating accident when she was six years old. Senior students in the Washington University in St.Louis studying biomedical engineering printed a prosthetic arm using plastic as the raw material for Sydney. The total cost was only $200. This prosthetic is powered by a battery and controlled by an accelerometer allowing her to move her prosthetic fingers (Washington University in St.Louis Newsroom [WUSTL], 2014). The most recent 3D printed prosthetic hand is the “Flexy-hand”, produced by Gyrobot Ltd by Steve Wood. This prosthetic arm looks very similar to a natural human hand and it operates like one too. He has used Filaflex flexible filaments which form tendons that are activated by a motor that allows the prosthetic hand to operate very much like a normal human hand. (Krassenstein E, 2014)

Maxillofacial prosthetics are also being produced by 3D printers. Usually the conventional maxillofacial prosthetics production requires that an impression from the trauma site is taken, then a plaster positive should be formed, a mould should be made and the specific shape must be carved in the wax, lastly it must be casted in silicone. This is very laborious, time consuming and expensive to be done. Using the 3D technology, the patient’s face should be 3D-scanned, this image will then be converted to the appropriate file to print the perfectly fitting prosthetic part (Wainwright O, 2014, June 12).

3D-printed titanium shoulder and collar bone implants were successfully implanted into three different patients suffering from cancerous bone tumors in Xi’an, China. The bone design was printed using the selective laser sintering technique which fused titatium powder into the exact shape of the patient’s bone. The implants do not cause infections and are very durable and resistant (Zeng C, 2014). This has also been done in the United Kingdom for a cancer patient (Moore G, 2014). Soon, 3D printing will replace manufacturing industries and save millions of lives.

Various kinds of implants such as knee caps, skulls, auditory devices, and jaw bones have already been produced by a 3D printer and have successfully been implanted. There are 2 astonishing cases whose patients have been given a second chance to live due to 3D printers. The first case is Stephen Power, he is a survivor of a motorbike accident that shattered his face. His face was reconstructed at Morrison Hospital in Swansea, however, his entire face was reconstructed using custom made 3D printed models, plates, implants and guides. The surgical team used CT scans to create symmetrical 3D models of Power’s skull which they then printed, implanted, and held in place using a printed titanium implant (Griffith H, 2014). The second case is of a 22 year old woman from the Netherlands who had her skull replaced by a 3D printed skull implant. She suffered from a chronic bone disorder which increases the thickness of her skull, neurosurgeons at the University Medical Centre Utrecht printed a perfectly fitting durable plastic skull implant (University Medical Center Utrecht [UMCU] research news, 2014). Dr.Bon Verweij of the UMCU says: “It’s now three months after the operation. The patient has fully regained her vision, she has no more complaints, she’s gone back to work and there are almost no traces that she had any surgery at all.”

The printing process of prosthetics and implants requires hours to a few days maximum. There aren’t any documented reactions to the prosthesis or implants, they are cheaper, more durable, more resistant, less laborious and they are FDA approved (Pollack SK, Coburn J, 2013). However the main disadvantage is the expensive price of the printer and the designing program. Most prototypes are open ended and available online for modification and many hospitals and universities now have 3D printers (Stratasys Ltd, 2014, June 12).

With the increasing popularity and availability of 3D printers, we are finally ableto create prosthetics and implants under $1000. Even though alternative production methods are present, they are not available to the people that need them most due to their high cost. They are cheap, fast,