The discovery of antibiotics over 90 years ago and as multidrug resistance becomes increasingly prevalent it poses a significant threat to public health and welfare. Bacteria possess a range of molecular strategies that facilitate pathogenicity through interactions with the host cell, these can be unique to specific pathogens or conserved across several species. Conventional resistance mechanisms such as chromosomal β-lactamase, and efflux systems which pump out antibiotics, maintaining a low intra-cellular concentration can contribute to antimicrobial resistance and to the development of a biofilm (Wilson et al., 2002). In the lab, we tested the antibiotic resistance of 4 strains against 4 different antibiotics. The test organisms used were S. marcescens 310258, Coliform B 706498 (a mixture of E. coli, Klebsiella & Enterobacter), E.coli 310217, E. coli 704476/2 and E. coli NCTC 10418. These were cultured on iso-sensitest plates and incubated with the antibiotic discs prior to quantification of the inhibition zones via the BSAC disc diffusion method.

A biofilm is an organized group of bacteria embedded in a matrix that is composed of extracellular polymeric substances (EPS). They have significant clinical interest as they can confer a range of benefits to the microbial community including increased tolerance to antibiotics and resistance to host immune responses. Additionally, they are frequently associated with nosocomial infections as they are common on medical devices and implants such as prosthetic heart valves, orthopaedic implants and intravascular catheters (Donlan, 2001). This experiment aims to quantify the ability of 5 organisms to develop a biofilm in liquid flow and relate this to antimicrobial resistance. Measurement of biofilm formation was carried out by incubating 5 organisms in a dilution (P. aerunginosa MPA01 and the 4 strains mentioned above) prior the use of a crystal violet staining assay, in which the amount of staining is directly proportional to the cell biomass. 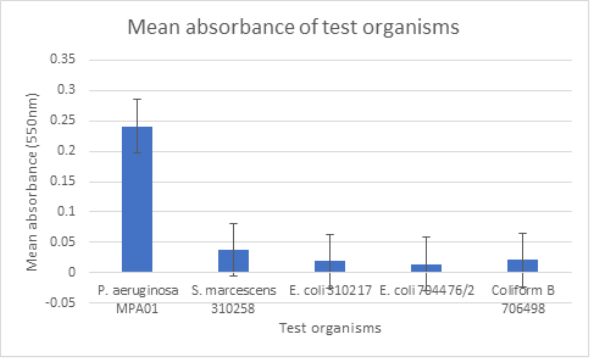 Figure 1: The mean absorbance values for each of the organisms at 550 nm. These values were inputted into a one-way ANOVA in combination with a Tukey pairwise comparison to demonstrate the mean absorbance of each strain and the reliability of statistical differences. The graph also illustrates 95% confidence intervals for each organism.

The 4 antibiotics used in this investigation (CFX, CXM, CTX and CPM) are first, second, third and fourth generation cephalosporins respectively, which are one of the most widely prescribed type of medication in the world. They are part of a class of β-lactam antibiotics, that disrupt the synthesis of the peptidoglycan layer that forms the bacterial cell wall. This is integral to the bacteria’s structure and is reliant on penicillin binding proteins (PBP) during its formation. Cephalophorins mimic the binding site for these proteins, consequently irreversibly inhibiting PBP crosslinking of peptidoglycan (Yotsuji et al., 1988). The need for multiple generations of cephalosporins stems from improper and overuse of previous generations of antibiotics, leading to antimicrobial resistance. Each newer generation has significantly greater activity against Gram-negative bacteria than the previous generation, in most cases with decreased Gram-positive antimicrobial properties. However, fourth-generation cephalosporins have a broader spectrum of activity with both Gram-positive and Gram-negative. (Nicols and Smith., 1991).

As indicated in the reference ranges in table 1, organisms with a zone of inhibition > 20 mm are susceptible to the antibiotic. By using E. coli NCTC 10418 as a control with known, expected zones of inhibition, the reliability of the other results can be assessed. As the values outlined in table 2 for this strain fit within the reference ranges outlined in table 1, it can be determined that the antimicrobial susceptibility for the other organisms tested are most likely accurate. Additionally, in table 2, there is variation in antibiotic susceptibility between the 2 different strains of E. coli tested. E. coli 704476/2 appears to be susceptible to all types of cephalosporins used, whilst E. coli 310217 seems to remain resistant. This variation is indicative of the genetic diversity of the species and the ability of bacteria to transfer resistance genes to other. This in part, is facilitated by biofilms as they mediate genetic conjunction between pathogenic cells. As table 2 indicates S. marcescens 310258 is resistant to CXM and CFX which is supported by conclusions made in a study carried out by Endimiani et al.

According to literature, some organisms that are part of the Enterobacteriaceae family, such as those in Coliform B 706498 (E. coli, Klebsiella and Enterobacter) demonstrate resistance to cefepime, typically by producing class A extended spectrum β lactamases (ESBLs). These are a group of complex, plasmid mediated enzymes that hydrolyse broad spectrum cephalosporins. This is in accordance with the results outlined in table 2 as Coliform B 706498 was resistant to CXM, as it had a zone of inhibition of 11 mm. Additional mechanisms of resistance to cephalosporin antibiotics include permeability barriers, which inhibit the ability of the antibiotic to cross the outer membrane of the pathogen to hydrolyse tin the periplasmic space. PBP structures may undergo genetic modifications which reduce the affinity to - lactam antibiotics (Livermore., 1987).

Biofilms present a significant threat to public health as biofilm associated organisms exhibit drastically reduced susceptibility to antimicrobial agents. This susceptibility may be intrinsic, as a natural outcome of the growth and development of the biofilm or acquired, due to the transfer of extrachromosomal elements, such as plasmids, to susceptible organisms within the biofilm. Additionally, biofilm production is utilised by pathogenic organisms in order to provide protection against environmental pressures such as pH, oxygen concentration and temperature. In a host, biofilms protect the microbial community against immune responses such as phagocytosis by macrophages (Donlan, 2001).

Quorum sensing (QS), a cell to cell communication process that is used by many bacteria to detect population density. This allows co-ordination of multiple processes including motility, virulence and biofilm formation. It also enables the regulation of a number of specific genes within a population. According to literature, P. aeruginosa possess 2 main QS mechanisms (las and rhl) which drive the production and recognition of signalling molecules necessary for the formation of a biofilm. As Davies et al demonstrated, lasI mutants produce flat, undifferentiated biofilms that are more susceptible to external toxins (Davis., 1998). This indicates the importance of QS systems in biofilm formation and supports the results obtained from my investigation, as P. aeruginosa had the highest absorbance value recorded across all bacteria tested.

As figure 1 indicates, all organisms tested were able to form a biofilm to some degree. This is supported by additional literature. For example, Wood and colleagues recognised E. coli’s ability to form a biofilm and demonstrated, using a set of different motility mutants, that its ability to form a biofilm is directly correlated with its ability to swim (Wood., 2009). Additionally, as Rice., et al. demonstrated S. marcescens biofilm morphology was is highly dependant on the availability of nutrients. The filamentous structure was favoured by high-nutrient conditions, while a classic microcolony biofilm was observed under low-nutrient conditions (Rice et al., 2005).