This study aimed to assess the anti-inflammatory effects of a traditional Mongolian medicine-Jonlon-5 against inflammation in an animal model. We also evaluated the acute and sub-acute toxicity of Jonlon-5. The level of acute toxicity of Jonlon-5 was determined in accordance with the Organization for Economic Co-operation and Development guidelines. A sub-acute toxicity study was done by oral administration of Jonlon-5 with daily doses of 100, 200, and 500 mg/kg body weight for 28 days. Paw edema was produced by a sub plantar infection of 1% carrageenan. Biochemical and immunological analyses were performed at the end of the study. We observed no adverse effects of Jonlon-5at doses up to were observed at doses up to 2000 mg/kg/day. In the sub-acute study, there was a significant increase (p<0.05) in the activity of serum liver enzymes of rats administered with 500 mg/kg body weight of Jonlon-5. The results demonstrate that Jonlon-5 can significantly reduce paw edema and inhibit the production of MDA, tumor necrosis factor-α, and interleukin-1β (p<0.05). Our findings suggest that Jonlon-5 has anti-inflammatory effects in carrageenan-induced in rats with arthritis. However, intake of high doses may exhibit mild liver toxicity.

The number of people with arthritis is rising rapidly around the world1-2. Arthritis is one of the leading causes of disability among adults and is very costly in both personal and economic terms2. Despite many advances in the management of arthritis, progress on finding a cure remains elusive. This is because currently available anti-arthritis medications have adverse effects with long-term use, creating the need for more effective and safe treatment options.  An alternative with some advantages, such as fewer side effects and lower cost, is herbal medicine3.

The traditional approach of combining several herbal medicines has been found to be more effective than administering them in isolation17. Given evidence that Jonlon-5 and its herbal components have potential antibacterial, anti-inflammatory, and anti-oxidative activities, we hypothesized that Jonlon-5 could be a safe and effective medication against inflammation. In the present study, we investigated the anti-inflammatory activity of Jonlon-5 on rats that were induced with paw edema. The acute and sub-acute toxicity of Jonlon-5 was also evaluated.

Jonlon-5 herbal medicine was prepared in the Institute of Traditional Medicine and Technology of Mongolia (Table 1). The crude components of Jonlon-5 were authenticated by experts from Department of Botany, Institute of Biology, Mongolia. One gram of crushed dried plant material was dissolved into 100 ml of distilled water and boiled at 100°C for 15 min. The prepared solution was used for the tests.

The current study was performed on Wistar albino rats of both sexes weighting 200 to 250 g at the pharmacology laboratory of the Institute of Traditional Medicine and Technology of Mongolia. The animals were kept and followed at standard laboratory conditions (room temperature (20 ± 2°C) and 12 h/12 h light/dark cycle). They were fed a commercial pellet diet and sterilized tap water.

For the acute study, healthy white mice of both sexes weighting­­­ 22–28 grams were purchased from the animal house of the Institute of Traditional Medicine and Technology of Mongolia and used after one week of quarantine. All experiments were carried out in accordance with the institutional guideline for the Care and Use of Laboratory Animals. This study was approved by the Ethics Committee of the Mongolian National University of Medical Sciences.

In animals, a single oral administration of Jonlon-5 did not produce any toxicity at a dose of up to 2000 mg/kg. Accordingly, a dose of 2000 mg/kg was used as the maximum dose as recommended by the Organization for Economic Co-operation and Development (OECD) test guidelines. Thirty mice of each sex were randomly assigned to two groups with fifteen mice of each. The animals in treatment group received a single dose of 2000mg/kg via gavage. Control mice were given an equal amount of distilled water. After oral administration, all clinical signs were recorded before and after dosing at 1, 2, 4, and 24h.

For the sub-acute toxicity study, 40 albino rats were randomly grouped into four groups of ten rats each. The control group was administered with 0.5 ml of saline once daily for 28 days. The rats in the other three groups were orally treated with 100, 200, and 500 mg/kg body weight of Jonlon-5, respectively, for 28 days. The rats were under constant daily observation for any signs of toxicity, and their body weights were also recorded weekly throughout the experimental period. On the 29th day of the experiment, all the animals in the four groups were anesthetized under ketamine hydrochloride (80 mg/kg). Blood samples were collected by cardiac puncture into non-heparinised bottles for biochemical investigation and centrifuged according to groups. The serum was separated into sterile bottles for biochemical analysis.

Determination of the level of malondialdehyde (MDA) was determined using the fluorimetric method according to a thiobarbituric acid test. In brief, 0.5 ml of plasma was heated in a boiling water bath for 15 min with a solution of 0.68% 2.5 ml thiobarbituric acid and incubated for 15 min on ice. The mixture was centrifuged at 12000 rpm for 5 min at 4°C. The MDA was spectrofluorometrically determined using a synchronous technique with excitation at 532 nm.

After being allowed to stand for 30 min, the blood was centrifuged at 3000 rpm/min for 10 min at 4°C; then, plasmas were collected for analysis. The serum concentrations of the tumor necrosis factor-alpha (TNF-α) and interleukin-1β (IL-1β) were determined using a commercial enzyme-linked immunosorbent assay (ELISA) method (ELISA kit, Republic of China).

The data are expressed as the mean ± standard deviation. A one-way ANOVA was used to identify the differences between groups, and followed with Tukey’s test. Statistical significance was set at the level of  p<0.05. The statistical analyses were carried out using the Statistical Package for the Social Sciences (SPSS) version 20.0 for Windows.

We evaluated the acute toxicity of Jonlon-5. There were no significant differences in body weight change findings between the Jonlon-5 and NC groups, and no clinical signs were observed in the Jonlon-5 group.

At the end of the experiment, there was a slight weight reduction in the Jonlon-5 treated rat groups compared to the control, but it was not statistically significant. This indicates the healthy status of the rats following Jonlon-5 decoction. Serum aminotransferases (ALT and AST) and alkaline phosphatase (ALP) activity significantly increased in a dose-dependent manner when the rats received various doses of Jonlon-5. ALT and AST activities were significantly higher in the 500 mg/kg body weight treated group when compared with the others (p<0.05). ALP activity showed no significant difference compared with the others (Fig. 1).

Effects of Jonlon-5 on carrageenan-induced arthritis

The injection of carrageenan in the three groups led to a time-related increase in size of paw, which reached a maximum at 4 h. Compared to the control group, pretreatment of Jonlon-5 at a concentration of 100 mg/kg of body weight significantly (p< 0.05) reduced the development of paw edema, as shown in Fig. 2.

Effects of Jonlon-5 on MDA concentration

In traditional medicine, combinations of multiple herbs are used to increase their pharmacological activity and reduce adverse reactions17. Thus, in this study, we focused on whether the combination of herbs in Jonlon-5 has anti-inflammatory and anti-oxidative activities that are associated with a reduction in oxidative stress and inflammation and whether it can be used safely.

The acute toxicity study allowed us to determine the safety of the materials. The study indicated that Jonlon-5 is a safe agent when given orally to rats in a single dose at a level of 2000 mg/kg. Moreover, no clinical signs of adverse events were observed. According to the Guidance on Acute Oral Toxicity Testing based on an oral LD50 value that was recommended by the OECD, Jonlon-5 may be assigned as class 5 (LD50>2000 mg/kg body weight), which was appeared to be the low toxicity class18.

TNF-α and IL-1β are inflammatory cytokines that are produced during inflammation that play an important role in host defenses. Previous studies have demonstrated an inhibition effect of different traditional medical treatments on the levels of TNF-α and IL-1β. Wen et al. reported that traditional Chinese herbs inhibited TNF-α, IL-1β, and IL-6 as well as levels of nitric oxide synthase (iNOS) and cyclooxygenase-2 (COX-2) in a carrageenan-induced paw edema22. Similarly, our study showed that pretreatment with Jonlon-5 reduced levels of TNF- and IL-1βcytokines in plasma.

However, our study has some limitations. There was no histological examination to confirm the therapeutic effect of Jonlon-5 in an experimental model of arthritis. Another limitation of the study is the inability to include various doses and hence to determine the dose-dependent anti-inflammatory effect. This would have made the study more comprehensive, although the safe dose the authors chose provided a positive result.

The authors would like to thank all staffs of the pharmacology laboratory and animal house, the Institute of Traditional Medicine and Technology, Mongolia, for their valuable contribution to the successful completion of the study and Mr Turner for language editing. Fig. 1 — Effect of Jonlon-5 on the activity of serum liver enzymes 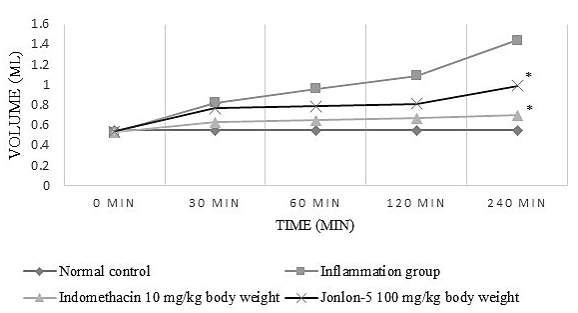 Fig. 3 — Effect of Jonlon-5 on the level of malondialdehyde (MDA)