The complement system is one of the major effector mechanisms of the innate immune system and it plays an important role in immune defense. The biological functions of complement are opsonization and phagocytosis, stimulation of inflammatory reactions by anaphylatoxins and complement-mediated cytolysis of microbes, especially encapsulated bacteria. The complement system is formed by an enzymatic cascade composed of plasma proteins that, once stimulated, can achieve tremendous amplification and effectively fight the invading microorganisms (Abbas et al., 2009).

Under certain conditions, a pathological immune reaction may develop against complement components, which on one hand reflects an underlying autoimmune process and may lead to inflammation and tissue injury on the other (Potlukova and Kralikova, 2008).

The first component of the classical pathway of complement activation, C1q, plays a crucial role in the clearance of immune complexes and apoptotic bodies from the organism. Autoantibodies against C1q (anti C1q) have been found in a number of autoimmune and infectious diseases. They have been best described in patients with systemic lupus erythematosus, where they are thought to play a pathogenic role in lupus nephritis (LN). Their high negative predictive value for the occurrence of active proliferative LN, as well as their possible ability to indicate a renal flare as soon as 6 months in advance, have rendered anti C1q antibodies a novel non-invasive tool in the detection of active LN (Potlukova and Kralikova, 2008).

The Complement C1q and Its Antibodies

C1q is the first component of the classical pathway of complement activation. Together with the enzymatically active components C1r and C1s, C1q forms the C1 complex. Binding of C1 to immunoglobulins in the form of immune complexes leads to activation of protease function of C1r and C1s and further activation of the classical pathway of complement (Schumaker et al., 1986).

C1q is a glycoprotein belonging to the collectin family with a molecular weight of about 410-462 kDa. It is a hexamer composed of globular heads attached to collagen-like triple-helix tails (Fig. 8). The globular heads of C1q specifically bind to the constant heavy (CH2) domain of IgG molecules or the CH3 domain of IgM. Each heavy chain of the immunoglobulin molecule contains only one binding site for C1q. Since C1q must bind to at least two heavy chains in order to change its conformation and activate C1r and C1s, its activation ensues only after binding to immunoglobulins in the form of immune complexes bound to multivalent antigens (Schumaker et al., 1986).

In addition to being the first component of the classical pathway of complement activation, C1q has many physiological roles. C1q can directly opsonize apoptotic cells (AC) for phagocytosis. In vitro, C1q binds to surface blebs on AC but not normal host cells (Korb and Ahearn, 1997). C1q binds to calreticulin (CRT) in AC blebs and opsonizes AC for enhanced phagocytosis through C1q interaction with CD91. C1q can opsonize AC also indirectly through complement activation (Lu et al., 2008). Consistent with this, the finding that C1q-deficient mice have been shown to have an accumulation of apoptotic bodies in the kidneys (Botto et al., 1998); and macrophages of C1q-deficient mice and humans have a decreased ability to clear apoptotic bodies in vitro (Botto, 1998; Taylor et al., 2000).

In this way, C1q promotes the clearance of autoantigens, preventing stimulation of the immune system and disruption of this process may lead to development of autoimmunity (Botto, 2001).

C1q-opsonized AC also regulates DC production of cytokines, but data from different studies are not entirely consistent (Lu et al., 2008). Apparently, most studies report C1q inhibition of IL-12 production from DCs and that AC stimulated macrophages produce more IL-10 and less IL-12. This suggests a tolerogenic property of C1q which is consistent to the development of autoimmunity at C1q deficiency (Botto et al., 1998).

Binding of monomeric IgG to C1q was first described in 1971, in sera from patients with SLE with hypocomplementemia (Agnello et al., 1971), and in 1978, precipitation of C1q by monomeric IgG was documented in the hypocomplementemic urticarial vasculitis syndrome (HUVS) (Marder et al., 1978). In 1984, anti C1q antibodies were found in patients with SLE (Uwatoko et al., 1984). Since then, occurrence of anti C1q antibodies has been described with varying prevalence in patients with autoimmune and also some infectious diseases (Wisnieski and Jones, 1992).

Anti C1q antibodies were mostly of the IgG subtype with IgG1 and IgG2 being the predominant subclasses (Siegert et al., 1990). The prevalence of anti C1q in the general population varies between 2% and 8% (Potlukova et al., 2008). As is the case with other autoantibodies, the occurrence of anti C1q increases with age (Ravelli et al., 1997; Siegert et al., 1993). The mere positivity for anti C1q antibodies in an otherwise healthy individual does not appear to bear any pathological or prognostic significance (Potlukova and Kralikova, 2008).

The binding of anti C1q antibodies to C1q is mediated via Fab fragments and in contrast to immune complexes, anti C1q antibodies do not bind to globular heads of the C1q molecule but to its collagen-like tail (Fig. 8). The binding is very weak in the liquid phase, but achieves high affinity in the case of a conformationally changed C1q in the bound state exposing new antigenic determinants. Thus, any possible pathogenic role of anti C1q antibodies probably remains confined to local deposits of C1q in tissues (Potlukova and Kralikova, 2008).

Another intriguing mechanism of the pathogenicity of anti C1q antibodies might be a switch from non-inflammatory recognition of apoptotic bodies by C1q and its receptors to inflammatory recognition when C5a and other complement activation fragments are generated during enhanced complement activation due to anti C1q antibodies at sites where C1q is recognizing nuclear antigens (Holers, 2004). 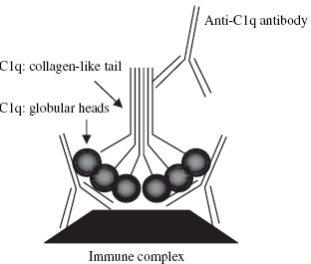 Fig. 8: A simplified scheme of the binding of anti C1q antibodies to the molecule of C1q.

Anti C1q antibodies per se do not seem to activate complement; however, their binding to C1q may amplify complement activation by increasing the amount of the bound IgG in a vicious circle manner. Furthermore, they might attenuate the physiological functions of C1q, including the capacity to activate the classical pathway of complement and to clear immune complexes and apoptotic bodies. Taken together, several different mechanisms seem to be involved in the pathogenicity of anti C1q antibodies (Potlukova and Kralikova, 2008).

The presence of anti C1q antibodies in lupus is typically accompanied by a number of clinical and serological features. The complement profile is similar to that seen in HUVS, with very low levels of C1q, C4, and C2, and, to a lesser extent, C3. Anti C1q antibodies tend to remain positive in SLE for prolonged periods, and there is associated prolonged hypocomplementemia. This differs from anti-double-stranded DNA antibody levels, which tend to fluctuate in concentration, together with inverse changes in complement levels (Pickering et al., 2000).

Saadoun et al. (2006) have reported an increased prevalence of anti C1q antibodies in patients infected with hepatitis C virus (HCV), with 26% being positive. Contrary to expectations, the occurrence of anti C1q antibodies did not differ between HCV-infected patients with and without mixed cryoglobulinemia indicating that immune complexes do not cross-react with the anti C1q assay and proving also the abundant presence of immune complexes in the circulation does not seem to be sufficient to provoke generation of anti C1q. Further studies are needed to elucidate their role and clinical relevance in other diseases.

In the past, radioimmunoassay based on the binding of immune complexes to C1q fixed to a solid phase was mainly used to determine the concentration of immune complexes (Hay et al., 1976). Later, the solid-phase C1q binding assay was modified into an enzyme-linked immunosorbent assay (ELISA). For this purpose, either whole C1q or the collagen-like region of C1q was employed. However, the use of individually prepared ELISA kits with differently set cut-off limits for positivity led to a rather large disparity between the results of clinical studies. Nowadays, measurement of anti C1q antibodies in serum has become easier; thanks to commercially available and standardized ELISA kits using the whole C1q molecule as antigen (Potlukova and Kralikova, 2008).

The main pitfall in the measurement of anti C1q antibodies consists in a possible binding of circulating immune complexes to the solid-phase bound whole C1q. However, it has been shown that the use of high ionic strength conditions in the incubation media inhibits any similar unwelcome binding and it renders the ELISA reliable for clinical use (Kohro-Kawata et al., 2002).