The aim of this experiment was to compare salivary oestradiol, progesterone, and testosterone concentrations in healthy, premenopausal males and females, as well as fluctuations in oestradiol and progesterone throughout the ovarian cycle. 76 saliva samples were collected and assayed, after which subjects on contraception, other significant medication or those with irregular cycles, were excluded from data analysis. Testosterone, being the primary male sex hormone, was significantly higher in males (830.05 ± 102.02 pmol/L) than females (278.82 ± 31.58 pmol/L) (p < 0.0001). Oestradiol and progesterone concentrations were predicted to be similar in males and females and this was observed in the results. According to literature values, oestradiol is the dominant steroid in the follicular phase and progesterone in the luteal phase. Results for oestradiol did not reflect this theory, as concentration was 9.58 ± 1.43 pmol/L in the follicular and 7.76 ± 0.64 pmol/L in the luteal phase (p = 0.2471). Progesterone, however, did increase from 176.19 ± 75.2 pmol/L in the follicular phase to 406.61 ± 101.18 pmol/L in the luteal phase (p = 0.0838). Fluctuations of oestradiol and progesterone throughout the ovarian cycle differed slightly from published reports, which could have been due to limited sample numbers.

For many years, testosterone was referred to as the ‘male’ sex hormone and progesterone and oestradiol as the ‘female’ sex hormones. However, research has uncovered the vital functions of each of these hormones in both sexes. In fact, progesterone secretion and serum concentration has been found to show no significant difference between males and females (﻿Oettel and Mukhopadhyay, 2004) and similar results have been reported for oestradiol (Schultheiss, Dargel and Rohde, 2003; Schultheiss, Wirth and Stanton, 2004). Testosterone, on the other hand, is synthesised and secreted in large amounts from Leydig cells in males and is therefore, predicted to have a larger concentration in males than females (Pocock, Richards and Richards, 2018).

Progesterone and oestradiol display characteristic fluctuations throughout the 28-day ovarian cycle (Reed and Carr, 2000). Days 1-12 of the cycle constitute the follicular phase, in which an oestradiol surge occurs prior to ovulation. The luteal phase that follows ovulation consists of a distinct progesterone peaks, as well as a smaller, mid-luteal oestradiol surge (Chatterton et al., 2005).

Salivary analysis of steroid-hormone concentrations throughout the ovarian cycle is possible due to the lipophilic nature of steroids, allowing them to diffuse into salivary glands. This technique has proven to be non-invasive and efficient because it involves testing of the biologically available fraction of steroid-hormone that is not bound to serum protein (Gandara, Leresche and Mancl, 2007; Ishikawa et al., 2002).

In this investigation, saliva samples were tested in a competitive enzyme-linked immunosorbent assay (ELISA), which was based on competition between sample steroids and synthetic steroids conjugated to horseradish-peroxidase, to bind antibodies adsorbed to the bottom of a plastic well. Peroxidase activity was assayed, forming a coloured product that could be measured using a spectrophotometer (Salimetrics, 2013).

The aim of this study was to investigate sex-related differences in steroid-hormone concentrations, as well as patterns in progesterone and oestradiol during the ovarian cycle in healthy, premenopausal females.

Saliva samples were collected from 21 males and 55 females, majority of whom were students, aged 18-27, with the exception of three samples from individuals, aged 51-68. Participants provided at least 2 mL of saliva in a polypropylene sample tube, as well as details of age, sex, medication and stage of menstrual cycle where relevant. Samples were then vortex mixed and divided into three polypropylene microcentrifuge tubes, after which, they were frozen at -20°C in order to precipitate mucins and preserve steroid content until they were to be used again. 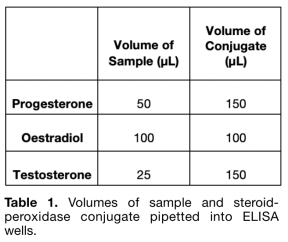 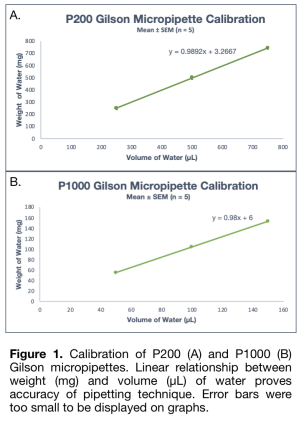 P200 and P1000 Gilson pipettes were calibrated before use in the experiment. Various volumes of water were pipetted onto an electronic balance and weight of water was recorded. Graphs in figure 1 display a linear relationship between the two variables, proving accuracy of pipetting technique.

After one week, saliva samples were thawed, vortex mixed and centrifuged at 10, 000 x g for five minutes. Each saliva sample was then pipetted into two ELISA wells to be measured in duplicate. Synthetic steroid-peroxidase conjugate was added to each well, which were then covered, mixed gently and incubated for one hour. Specific volumes of sample and conjugate that were used are represented in table 1.

Following incubation, wells were emptied and washed with a buffer, after which, 200 μL of tetramethylbenzidine and H2O2 substrate solution were added to each well. Plates were then covered with aluminium foil and mixed gently for 30 minutes.

The reaction was stopped by mixing 50 μL of 5% methanesulfonic acid into all wells, generating a colour change from green to yellow. Thereafter, optical density (OD) was read at 450 nm in a spectrophotometer.

Mean NSB OD was subtracted from mean OD for each sample duplicate and standard. % control binding of samples was calculated and plotted against steroid concentration for each ELISA plate to generate calibration curves (Figure 2).

A complete calibration curve could not be constructed for progesterone plate two and was therefore combined with measurements from plate one to form an overall calibration curve. This was acceptable because both plates were developed at the same time, using the same reagents.

The assay diluent used in the experiment contained a pH indicator to test for samples with high or low pH, which could possibly affect assay results. Samples that turned dark purple or yellow were discarded from the analysis, as well as samples from subjects on contraception, other significant medication or those with irregular cycles.

Gloves and lab coats were worn throughout the experiment and caution was taken when handling corrosive chemicals, such as methanesulfonic acid. 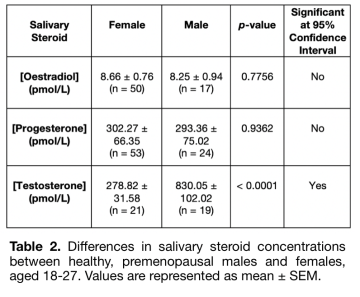 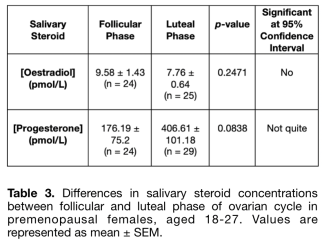 Oestradiol and Progesterone During Ovarian Cycle 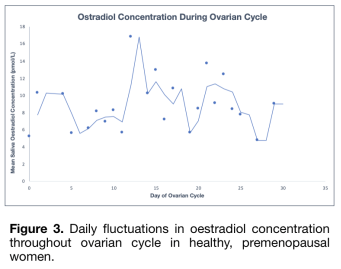 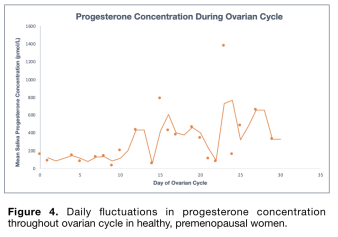 The levels of testosterone, progesterone and oestradiol in this investigation are comparable to those reported in other studies. Testosterone, being larger in males than females, was the only hormone found to have a significant difference between sexes. Leydig cells in the testes of mature males are primarily responsible for secretion of testosterone, which is required for the development of male primary sexual characteristics and mature sperm (Pocock, Richards and Richards, 2018). On the other hand, progesterone and oestradiol concentrations were found to be similar in both sexes. It is well known that progesterone and oestradiol have important functions affecting the reproductive tract during the ovarian cycle, however, less is known about their functions in males. Oestradiol is essential for male sexual function in regulating libido, erectile function and spermatogenesis (Schulster, Bernie and Ramasamy, 2016) In addition, oestradiol receptors have been found to be highly concentrated in the brain, penis and testis. Progesterone acts to induce spermiogenesis, sperm capacitation and testosterone biosynthesis in Leydig cells in males (Anderson and Tufik, 2005).

Oestradiol and Progesterone During Ovarian Cycle

The ovarian cycle occurs in response to fluctuations in hormones produced by the hypothalamus, pituitary and ovaries. Menstruation marks the onset of the cycle and is followed by the follicular phase, which is involved in the development of the ovarian follicle. An oestradiol surge occurs due to follicle stimulating hormone (FSH) secretion, prior to ovulation, in order to prepare the reproductive tract for transportation of gametes, fertilisation and implantation (Breed and Carr, 2018). This theory is reflected in the results, where oestrogen concentration increased rapidly on day 12.

The follicle ruptures to form the corpus luteum, marking the end of the follicular phase and onset of ovulation on day 14. Oestradiol concentration decreases and progesterone concentration increases as granulosa cells, under the influence of luteinising hormone (LH), stimulate cells to synthesise progesterone (Pocock, Richards and Richards, 2018). Results showing a considerable increase between progesterone in the luteal phase compared to the follicular phase supports this hypothesis. Progesterone plays a crucial role in development of female reproductive functions by controlling ovulation, inhibition of uterine contractility and sexual behaviour (Anderson and Tufik, 2005). Oestradiol, however, does peak once again in the mid-luteal phase and this was seen in the results around day 21. Although oestradiol is hypothesised to be the dominant hormone in the follicular phase, no significant difference was observed in oestradiol concentration between the follicular and luteal phases.

In the absence of fertilisation, the regression of the corpus luteum causes a decrease in progesterone and oestradiol levels, resulting in the onset of menstruation and the start of a new cycle. This was not observed in results due to anomalies.

Various inconsistencies could have been the cause of anomalous results, one of these being a limited sample size as well as missing data for certain days of the ovarian cycle. A larger sample could have been used. As well as this, the immunoassay was carried out by a large number of students, increasing the risk of inaccurate results. Accuracy could have been improved if samples on same plate were handled by one person.

To conclude, ELISA of saliva showed a sex-related difference in testosterone but no considerable difference between oestradiol and progesterone. Progesterone was found to be significantly higher in the luteal than follicular phase. Inconsistencies in the investigation could have been the results of limited sample size.