Aims: to test the morphology of sheep’s blood smear and to calculate the number of viable cells and the percentage viability of live and dead mononuclear cells. To investigate and analyse actin expression in Hela cells by APAAP immunocytochemistry.

There are three main components of blood these include erythrocytes (red blood cells), leukocytes (white blood cells) and thrombocytes (platelets). Leukocytes are produced and store in a number of locations called lymphoid organs inside the body such as the spleen, thymus and the bone marrow through a process known as haematopoiesis. They are part of the bodies primary defence mechanism against infections caused by disease causing microorganisms entering the body. Leukocytes are constantly produced and released into the bloodstream where they circulate the body travelling from organs to lymph nodes where they are stored via the lymph and blood vessels. There are three different types of leukocytes known as granulocytes, lymphocytes and monocytes (Kara, 2011). The granulocytes include eosinophils and basophils which are involved in immune responses and also neutrophils ingest and kill any foreign body that enter the body such as bacteria and fungi. Lymphocytes help to protect against viral infections whereas others develop into antibodies against foreign invasions. Blood smears and differential staining techniques such as the Giemsa and Grunwald staining can be conducted to analyse the morphology of blood cells to help diagnose blood disorders.

Mononuclear cells also known as agranulocytes are white blood cells containing one lobed nucleus. These include monocytes and immunocytes such as B-lymphocytes, T-lymphocytes, natural killer (NK) cells and macrophages. Normal blood values vary from around 50, 00 to 10, 000 leukocytes per cubic millimetre. High values of leukocytes are known as leucocytosis and it is most commonly due to inflammations as a result of an immune response or blood diseases such as leukaemia (Marshall, 2008). Low values of leukocytes are known as leukopenia this occurs when the bone marrow is unable to produce sufficient RBC like for example neutrophils which leads to neutropenia, this can make the body more prone to diseases and infections therefore mononuclear cell counts are widely used in immunology, haematological malignancy, oncology and vaccine development to monitor immunological functions and to identify and diagnose blood related conditions. This can be achieved by the Ficoll-Hypaque technique; a density gradient method that separates lymphocytes from other formed elements in blood which can be removed and stained with trypan blue in order to be viewed on a haemocytometer under the microscope. Live cells have an intact cell membrane that is impermeable to certain dyes such as trypan whereas dead cells do not therefore viable cells with a clear cytoplasm and nonviable cells with a blue cytoplasm can be identified and calculated (Harlad and Heinz et al, 2004).

Immunocytochemistry is the identification of a tissue by specific antigen-antibody interaction where the antibodies are marked with a visible label for examination under the microscope which was first described by Albert H. Coons in 1941. This technique was further developed in different ways by using different indicator molecules such as fluorescein molecules, biotin and enzymes i.e. peroxidase. APAAP (alkaline phosphatase anti-alkaline phosphatase) is an alkaline phosphatase method first described by Cordell et al in 1984 (John, 2008). Antibodies are proteins known as immunoglobulins (Igs) which are further categorised in to different isotypes. The IgG isotype is most commonly used in immunocytochemistry as its biding is more consistent. Actin is a highly conserved and abundant cytoskeletal protein which exists in six different known isofroms in mammals therefore it can be used to detect cancer cells like Hela cells, a continuously cultured strain isolated from human cervical cancer cells, as they are rapidly multiplying and are rich in Actin. Beta and gamma actin are known as cytoplasmic actin as they are expressed in non-muscle cells. Mouse anti-actin antibody is used in this technique as they are a form of highly conserved globular proteins which are found in cell mortality, structure and integrity of all eukaryotic cells hence are often found around the nucleus in the cytoplasm (Richard, 2010). 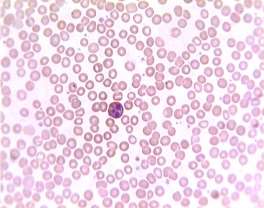 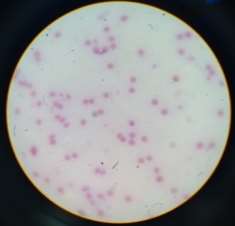 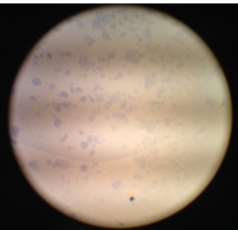 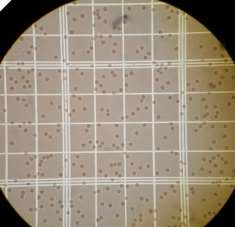 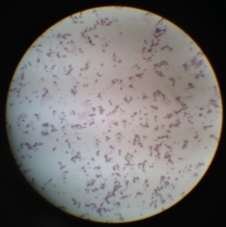 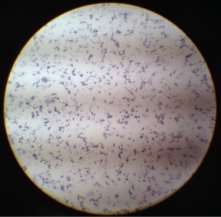 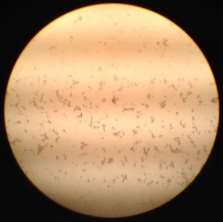 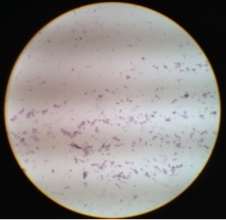 The Giemsa and Grunwald staining of the sheep’s blood smear show the all the red blood cells are approximately the same shape and size however the number of red blood cells present appears to be fairly lower than expected. There are a number of reasons as to why this could have occurred such as lack of iron lead to failure of haemoglobin production therefore the number of red blood cells lost cannot be replaced efficiently. Other causes that may result in decreased numbers of erythrocytes may be due to bone marrow damage or disorders, internal or external bleeding and kidney failure. The red blood cells were all however the same shape and size which shows that there is no cause of concern for diseases related to abnormal shapes of RBCs such as sickle cell anaemia. Although the cells appear spherical in figure 1 this may be due to the low magnification and resolution therefore in order to confirm spherocytosis further analysis in higher resolution and tests need to be carried out. The light pink staining in the centre of the RBC shows that the area is less dense indicating the absence of a nucleus and the biconcave structure.

The mononuclear cell count shown in figure 2 does not show any live mononuclear cells. There are a number of reasons as to why this may have occurred like for example when pipetting the separated white blood cells layer on top of the ficoll layer may have been taken from the wrong layer of cells. Another point to taken into consideration is that when removing the supernatant the live cells may have also been accidentally removed with it. As sheep’s blood cells were used instead of human blood the layering in ficoll is likely to be slightly different therefore in order to obtain a better sample of live and dead mononuclear cells the white blood cells should be removed closer to the bottom of the tube just above the red blood cell pallet at the bottom. In figure 2 there were no dead cells present in the centre square therefore the percentage viability cannot be calculated by dividing the number of live cells by the number of dead cells. The red blood cell count varies from person to person as factors such as the altitude and gender. The normal value of male blood count is 4.5 to 6.0 x106 and in females it is 4.0 and 4.5 x 106 therefore when comparing the sheep’s RBC count of 9.3 x 106 calculated from figure 2 is high. A high number of red cell counts may be due to lung diseases, kidney tumours and polycythaemia vera (PVC).

The APAAP immunocytochemistry method conducted shows that the Hela cells are a single lineage as all cells in figure 6 were stained brown when incubated with primary anti-actin antibody and secondary polyclonal Goat anti-mouse antibody which are complimentary to each other hence they will only bind to the same cell lineage with the specific antigen. Figure 5 shows a positive isotype control of hela cells incubated with purified mouse monoclonal. This confirms that the actin antibody specific background staining shown in figure 5 were not due to non-specific interactions of antibody molecules with the HeLa cell sample. Figure 4 also shows that hela cells without the secondary antibody alone without the primary antibody convey no significant background staining caused by DAB hence also supporting the fact the background staining is highly antigen specific (Stross and Jones et al, 1989). This method can be used to analyse the cellular contents, localisation and the distribution of cells in their surroundings and their relationship with other cells in peripheral blood smears, swabs, cell cultures, histological biopsy and bone marrow aspirates hereby giving definitive diagnosis to tumour and cancer diagnosis. An alternative immunocytochemistry method is Avidin-Biotin complex (ABC). Similarly like the APAAP method it involves the application of a primary antibody, secondary antibody however APAAP complex is replaced with Avidin-Biotin peroxidase complex (Buchwalow and Bocker, 2010).