The objective of this report was to agree or disagree with the theory that animacy is an important mnemonic dimension. It was hypothesised that this was the case and animacy helps people with recall. First year students of 1001PSY Introduction to Cognitive and Biological Psychology, participated in an experiment where they were to remember words that appeared on a PowerPoint. A distraction task was applied to control for maintenance rehearsal and recency effect. The results from the experiment showed that animate words were more correctly recalled than inanimate words. It can be concluded that the hypothesis was supported and animacy is a mnemonic device as it is an aid for memory.

The Validity of Animacy as a Mnemonic Dimension

The purpose of this report is to validate whether animacy is an important dimension in regards to memory and mnemonics. Memory is the process of which information is acquired and modified so that knowledge can be stored, retrieved and used (Foster & Wilson, 2005). The memory process starts with encoding the information, followed by storage, and retrieval. Encoding involves the information getting into the memory, and forming a memory code. Storage is where the information is kept in the memory, and retrieval is the process of accessing the stored information at a later time. This occurs in between short-term memory (STM), and long-term memory (LTM).

The serial position effect is the idea that the position in a list to be remembered, can have an effect on the correct recall. The usual pattern for this is that the first few items (primacy), and the last few items (recency), on the list, are better remembered than the stimuli located in the middle. The primacy effect has emerged due to the first few items being successfully transferred to stable, long-term memory, whereas the recency effect is a result of the stimuli functioning in short-term memory (Wiswede, Russeler, & Munte, 2007). The term mnemonics is used to describe a variety of aids for memory that can result in an improvement in the retention and learning of information. The basic principles within this technique are recoding, meaningfulness, and organisation (Dickel, 1983).

Animacy is acknowledged to be a foundational dimension for mnemonics, and plays a helpful role in regards to memory. Animacy is the concept best defined as living organisms. According to Nairne, VanArsdall, Pandeirada, Cogdill, and LeBreton (2013), for successful reproduction and survival of the human race, it is essential to distinguish between animate and inanimate things. Evolutionary psychologists would think it fit to suggest that selectively tuning and remembering animate things is an essential process done by the memory system as predators, as well potential mating partners, are animate beings and aid with the continuation of human existence.

Little attention has been brought to mnemonic dimensions when studying memory. As Nairne et al. (2013) state, “the focus tends to be exclusively on the ‘how’ of remembering”. The recognition of the origins of cognitive systems can create a basis for the discovery of empirical phenomena.

In the 1001PSY Introduction to Cognitive and Biological Psychology tutorials, 386 (279 female) first year undergraduate psychology students at Griffith University participated in this experiment (Age Range= 16-55 years old; Mage= 19.79, SD= 5.39). Participation was encouraged however there was no incentive.

There were two types of stimuli presented in this experiment. The main experiment was presented on a white PowerPoint slide with 24 words (12 animate and 12 inanimate) and were on a slide each. 2 buffer words were also used at the beginning and the end of the slides but were not identifiable from the other words by the appearance. The words were in black, Calibri (Headings) in size 115 font in the middle of the slide. Every 5 seconds the slides would change and a new word would appear. The exact words used are presented in Table 2 (Appendix A).

The participants were supplied with a scoring sheet to tick off what words they remembered (Refer to Appendix B). The second stimuli was the distractor experiment, which consisted of a similar presentation. 20 varying numbers (11 odd, 9 even), were presented on a PowerPoint with white slides. The numbers were on the middle of a slide each, in the same font but size 166. The numbers used in the distractor experiment are presented in Table 3 (Refer to Appendix C). The digits were presented on a slide each; one at a time for three seconds.

The instructions were given by the experimenter, which in this case, is the tutor of the class. Once all the participants were all seated at a table, they were asked avoid any sort of implement to help record the words, and were asked to remember as many words that appeared as they could. The PowerPoint and the tutor notified the students when the words were going to appear. Once the last word was reached, the tutor as well as the PowerPoint notified the students that it was the end. The distraction task began after the last word appeared.

This task had a designated time for 1 minute and began with a slide of the PowerPoint that included instructions that were also read out by the tutor. The participants were required to indicate whether the numbers changing on the board were odd or even on a supplied response sheet (Refer to Appendix D). Results for this task were then checked. At the end of this instruction, the response sheet for recalling the words was supplied. It was asked of the students to write down as many words of the first task as they could with a time allowance of 4 minutes. To check what words they remembered, they were given a scoring sheet in which they could tick off the words they correctly recalled. Once the 4 minutes were over, the students compared their recalled words with a scoring sheet (Refer to Appendix B). The number of correctly recalled ‘animate’ and ‘inanimate’ words, were added and the total for each was written down. Additional information like their age and gender was also collected. Only the scoring sheets for the word recalling task were handed up to the tutor.

Total No. of Words Recalled. 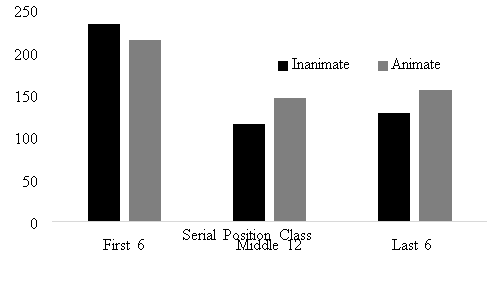 Figure 1. No. of words recalled for each serial position class.

A methodological concern with this experiment could be that the tutors were different throughout the classes and may have altered the instructions, this could include longer time on a word. Along with this, another concern could be that the participants could have written down words that they didn’t actually remember. These could have compromised the eternal validity affect the end result in measuring animacy as a mnemonic device.

From this information, further research can be done to find if there are differences in memory within social demographics and improve knowledge on mnemonics.