The experiment set out to prove or disprove that over a set period of time, opinion regarding immigration changes significantly.

Twenty participants took part in the experiment and were asked to complete a questionnaire, repeating the same questionnaire a week later. The questionnaire used the Likert attitude scale, offering responses from strongly agree to strongly disagree. Five positive and five negative questions were asked where the score was reversed.

The results proved that over time opinion does alter.

What impacts our social perspective, which is how we analysis and perceive, (individuals or groups) using varies methods of analysing body language, tone of voice, facial expression, behaviour and is how we makes sense of our surroundings. This is social cognition, the human brain’s ability process information associated with other humans, (http://www.wisegeek.com/what-is-social-perception.htm).

How would an individual perceive actions of another, if they were to put them down all the time? What if then it’s established they are a couple. Perceptions are distorted or have a bias if there is a link, favouritism. This is called in-group bias.

Trait concept is the social perception of how other traits can impact behaviour. If our surroundings or environment encourage and influence us to be of a certain social behaviour i.e. angry or helpful, then our tendency as humans is to mirror this expected behaviour.

Attitudes can change by the need for humans to comply. Compliance is when behaviour changes to or appears to change based on the situation the individual is in, be it a group conversation or debate, the need or peer pressure to comply with others or to influence the outcome. Where compliance has been reverted to, it doesn’t mean that the individual has genuinely changes their opinion on the subject or changed their belief, but have complied with the environment they are in. This is evidenced in the Asch experiment.

Attitudes can be influenced by targeting the individual’s emotion. An individual’s attitudes could have been influence in the last decade due to the 911 terrorist attacks, all the political campaigning and TV programmes about Eastern Europe. This can scare humans especially if they feel their own lives are threatened, as the news reports have suggested.

The role which individuals play can impact attitude. We have seen with the Milgram experiment that someone seen to be in a position of authority can influence individuals and caused them to give a seemingly lethal electrical shock to another human being.

The participants may be influence by what they believe is socially acceptable. Their opinion might be that they think immigration is bad for sociality, but because they believe this is not socially acceptable they might answer the questions differently and wish to be seen to be unprejudiced. The topic of immigration one that falls into the category of being heavily affected by social desirability, (McLeod; S( 2009) in http://www.simplypsychology.org/saul-mcleod.html, http://www.simplypsychology.org/attitude-measurement.html).

Perceptions are expectations the individual might have. For example, the expectation that an Eastern European person will conduct themselves in a certain way. This decision is made by recalling the stereotype and disregarding the Eastern European which didn’t fall into this category.

This thought process take seconds and can be used to quickly identify how to behave, respond and predict what will happen next.

Prejudice could be reduced if the group of individuals are on equal statuses, authority and interact on different social levels.

Opinion towards immigration alters significantly when asked the same questions twice over a set time period of time. There will be significant different in the correlation between participants’ attitude in score 1 and 2.

To evaluate how time influences opinion on the prejudicial topic of immigration.

The chosen design method is observational method; this allows the study of the participant’s behaviour using a varied level of control.

Repeated measures will be used, so the same participants take part in both conditions of the experiment. This reduces the number of participants as they same are used for both conditions, it is more convenient also and cost effective. Repeated measure designs disadvantage though is the participants know what they will be asked the second time round. Therefore their attitude might change to influence the results, consciously or unconsciously. They may be very driven the first time they answer the questions, then have lost interest the second time. Therefore their opinions might change towards the questions asked and might not be as strongly opinionated in the second round of questions.

Time sampling will be the main independent variable in this study. Observing participant’s attitude towards immigration at two different points in time. Time sampling is where for a set period behaviour is observed, in this case the duration of the experiment time slots for the questionnaire. WE aren’t using event sampling in this instance as this is observing all the time, and noting when behaviour changes.

The independent variable is what the experimenter has control over, in this instance it is time, which will provide the results or dependant variable and the questions being asked. The questions asked as the same in both conditions, are the same for all participants and comply with the Likert attitude scale to have five negative and five positive questions. Other variables in this experiment will not be controlled. For example, the exposure to information relating to the subject of immigration i.e. TV, news, discussions they might have after the experiment with others and therefore be influenced by other participants answers.

The experiment must have considered the code of conduct outlined by the British Psychological Society. Ethical considerations to not cause offence with the questions asked, gain consent once the full experiment has been explained, outline the purpose and procedure. Participants will be offered a copy of the results and an option to be personally debriefed.

Steps which will be taken:

Participants are list below, recording their age, gender and nationality. The names, address and contact details are no recorded for confidentially.

The questionnaire will be completed by each participant one week, and then repeated the following week. The date and time will be agreed, and the set rest period between the conditions will be fixed.

The overall scores from each will be compared to measure and provedisprove the hypothesis.

Repeated measures will be used, so the same participants take part in both conditions of the experiment.

Each participant will have the same information regarding the experiment, understanding of the purpose, the fact that they will be required to complete the questionnaire twice over a two week period, what the results will be used for and consent sourced before processing. They will be informed that they can stop the experiment at any given time. This will ensure the code of ethics is met and it is a fair and equal experiment.

Each participant will be thanked for their time and if they so wish can have a copy of the results.

The results will be gathered over the two week period and recorded in a raw data table as shown in Appendix B – Sample Results Table. This data can be used to provedisprove the hypothesis.

The results as explained below prove the hypothesis is correct. See Appendix D – Raw data from both conditions. This outlines each participants score for condition 1 and condition 2. 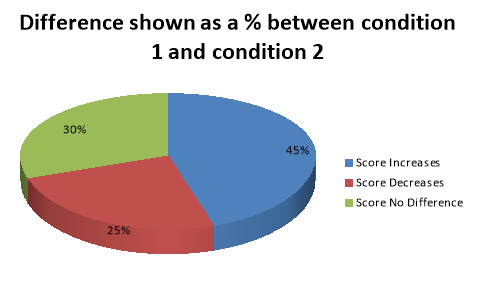 Data for the above pie chart can be found Appendix F – Shows Increases and Decreases by Percentage.

In this experiment, parametric statistics are used. This is because parametric statistics facilitate the study of an interval scale rating like the Likert questionnaire. It allows the point scale to be used in this questionnaire, from strongly agreeing to strongly disagreeing to be scored and the results interrupted to give a mean or standard deviation as an example. Using a variety of information to correlate the results provides more accurate and more powerful display of the results.

Opinion towards immigration alters significantly when asked the same questions twice over a set time period of time. There will be significant different in the correlation between participants’ attitude in score 1 and 2.

The results shown in Results conclude that if asked the same set of questions twice leaving a week in-between, that opinion towards immigration changes. Therefore proving the hypothesis correct and the null hypothesis incorrect.

75% of scores changed over the two conditions either negatively or positively but change nun the less. ¼ of the scores did not change.

The results shown are a reflection of the general population that opinion changes over time. The fact that the high percentage means the participants opinions scored higher would mean the chosen approach to repeat the questionnaire using the same participants didn’t cause them to become bored or uninterested, but the opposite was in fact expressed in the results. This however may be the result of the participants wanting to influence the results and therefore provide evidence towards the hypothesis.

The experiment could have more smoothly if there was an easier way to calculate the results. Reviewing and scoring each participant twice was very inefficient. If this experiment were to be done on a larger scale, this would need to be considered as an area to be improved.

Further control over the variables, i.e. what they read, watched and discussed throughout the week could have been controlled to genuinely see if it was just time as the independent variable impacts the dependent variable.

An idea to improve the experiment further is to increase the independent variable of one week between the conditions being repeated to several years. Opinion relating to the topic of immigration could change from 20 year old to 40 year old.

The experiment set out to confirm that individual’s opinion of immigration changes over time. This experiment had only a week between the two conditions and the results show that opinion (increase or decrease) significantly changes over time. With the increased score being the more dominant figure.