This study investigates the extent to which individual differences such as age, gender and levels of depression affect emotion recognition. Participants were tested by being shown pictures of different facial emotions – happiness, surprise, sadness, anger, disgust and fear. Their scores were then compared against the 3 factors. The findings show significant evidence for gender and levels of depression differences, but no significant negative correlation was found for age. The findings were also supported by previous studies, except for age. The results show that the hypothesis can only be partially supported.

Terracciano, Merritt, Zonderman, and Evans (2003) study tested 2 groups – African American and Caucasian of 106 and 46 participants respectively. The African American sample consisted of 51 males and 55 females and had low- socioeconomic status with an mean of 12 years of education. The Caucasian sample consisted of 24 males and 22 females with higher socioeconomic status, and an mean of 16 years of education. Two types of perception of affect task (PAT) were used – face and sentence subtask (Lane et al., 1996). The results showed that the African American group fared poorer than the Caucasian group on both the faces and sentence task. Also when education was controlled for, the differences in scores remained. The Caucasian group had significantly higher results for females over males in the face task, and also higher scores in the sentence task. However, no gender difference was found in the African American group. These results suggest that there could be also be a cultural variance in emotion recognition.

Calder et al. (2003) study examined 48 participants, half were between 18 to 30 years old and the rest were between 58 and 70 years old. Within each age group, genders were split evenly. Also, IQ was matched between groups. There were shown a total of 60 photographs taken from the picture of facial affect series (Ekman and Friesen, 1976). Participants were shown these pictures in a random order and asked to choose the best expression label for the picture, with no time limit. Their results showed there was a significant link between emotion and age group. They also found that the older participants were significantly better at recognizing disgust. Further experiments showed that there was a clear negative relationship between recognition of facial expression and increasing age. Also, it again confirmed previous results that recognizing disgust improved with age. Comparing results between age groups showed that, there was also no significant relationship between decline in recognition scores of other emotions and age. This suggests that poorer recognition in later age might not be due to general cognitive impairment.

The aim of this experiment is to determine whether individual differences like age, gender and depression levels could affect emotion recognition abilities. In the last measure –depression levels, this experiment will compare differences in scores against different facial expressions. For example, Gollan, Pane, McCloskey and Cocarro (2008) investigated patients with major depression and healthy patients, 37 and 29 participants respectively. Gender was split evenly in both groups. They measured their responses for emotion recognition task using the Picture of facial Affect (Ekman and Friesen, 1976). Their results showed that depressed patients tend to recognize neutral faces as sad faces as compared to the healthy group. However, the healthy group tend to identify neutral faces as happy faces. My hypothesis is that the ability to recognize emotions is affected by individual differences, like gender, age and levels of depression.

In this experiment, we were interested in the overall effect of gender on emotion recognition. There was one independent variable which was gender, and this was an independent measures design. The dependent variable is the sum of recognition scores, a higher score indicated better accuracy of identification. An Independent samples t-test was used. The Levene’s test of homogeneity was significant F (38, 29.01) =12.257, p=0.001. This means that the assumption of homogeneity of variance is violated. The Mann-Whitney U Test showed that there was a difference between male and female scores in recognising emotions. The mean rank of males and females was 13.75 and 27.25 respectively, z=-3.665, p<0.001. Thus, we can reject the null hypothesis that there is no overall effect of gender on emotion recognition. 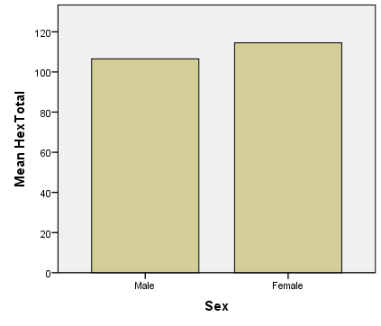 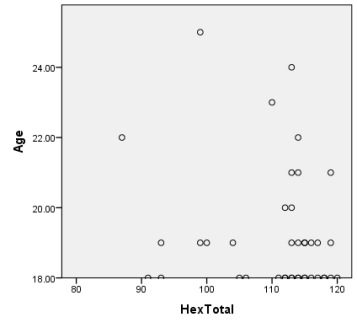 Figure 2: scatterplot showing no correlation between age and sum of recognition scores. 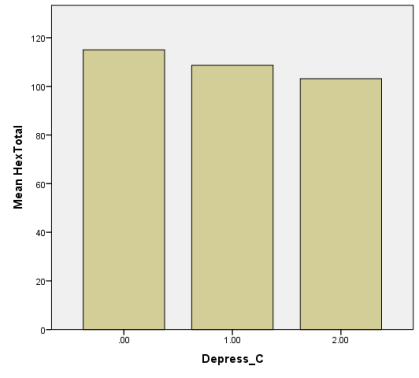 Furthermore, a correlational test only confirms a relationship exists, it does not show a definite cause and effect. Also, the number of highly depressed participants is not equal in proportion to the whole sample. It also has a small sample size and this could result in sampling error, thus making our results unreliable. This could explain lack of other differences found between other expression scores and levels of depression. Future research should also explore cultural differences between emotion recognition. The study by Terracciano et al. (2003) found differences in performance between African American and the Caucasian group. Although one possible reason could be, that the differences in results is due to better environmental factors in the Caucasian group. Further experiments have to be carried out to determine if there was a cultural effect on emotion recognition, or if it was due to other variables. Also, another study by Matsumoto (1989) examined 15 cultures and compared their scores against 4 factors – Power distance, uncertainty avoidance, individualism and masculinity. All four factors vary differently between cultures. By comparing their correlation we can determine if there is a culture effect on emotion recognition. Matsumoto (1989) found that there were significant negative correlations between power distance and intensity ratings of negative emotions. Also, a positive correlation between individualism and intensity ratings of anger and fear, but no significant correlation for uncertainty avoidance was found. Although Matsumoto (1989) did not find full support for his hypothesis, it is still useful to explore this area of study. Examining cultural differences in emotion recognition is useful as it can be applied to real life uses in our global environment.

The experiment has shown that this hypothesis has not been fully supported. Thus, we cannot conclude that there is a definite effect of individual differences on emotion recognition.