TASK QUESTION: Investigating the effects of people’s emotional cues on infants and establishing its influences during development. 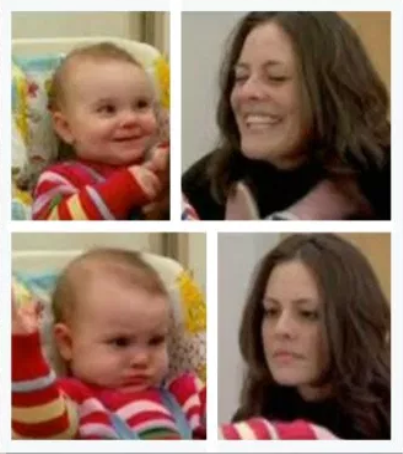 A large amount of research has investigated infants’ social and emotional development during their formative months. An infant’s emotional milestones begin to occur from the age of 6 months and develops as they get older, the most crucial time when they discover emotion can be argued to be between 6 months to 9 months old. During this time the baby becomes more aware that they are a separate person and starts to take a more active part in family life. The baby in realizing that they are a separate person from the parent recognizes a level of dependence therefore they form strong attachments to the parents and will start to worry if they are unable to see their parent’s face or feel their parent nearby.

Throughout this period an infant identifies their own emotions and that there are different emotions they can feel. It is in this phase that a parent plays a vital role in helping a child recognize the different emotions and the parent’s appropriate responses for these emotions for example if the baby is sad or lonely and begins to cry the parent then comforts and cuddles them showing their suitable response for that situation or if a baby is feeling hungry the parent then responds with providing them with food.

Games played in this phase also influence a baby’s recognition of emotions and its development, playing peekaboo can exposes them to surprise, sadness and happiness and also assists the baby in learning that the parent is still around even when they can’t see them. Allowing them to play in front of a mirror helps them to recognize what the different emotions look like when expressed on their faces.

In this research proposal we will investigate the effects of people’s emotional cues on infants and establish its influences during development. In particular we will prove the hypothesis that people’s emotional cues can influence an infant’s subsequent reaction. We will seek to examine infants from the age of 3 months old to 12 months old using a sequential design. Their relationships with the people around them will be examined as well to determine if these have the power to impact on the baby’s understanding of the world and who they are.

Babies who are emotionally health are better able to establish relationships with those around them, able to express their needs and wants and are able to identify and regulate their emotions in a better way. For this research proposal we will conduct an in-depth assessment of the Still Face Paradigm designed by Tronick, Als, Adamson, Wise and Brazelton (1978).

The Still Face Paradigm designed by Tronick, Als, Adamson, Wise and Brazelton (1978) was introduced to prove the hypothesis that babies are active contributors to social interaction. For instance, when a child hears a bed creak and by this sign recognizes the presence of his mother who will be able to feed him he limits himself to inserting a new perception in the complex schemata coordinated with sucking and in that respect the sign is still only a “signal” but he is on the way to attributing to his mother an activity independent of himself and, to this extent, the prevision under consideration presages the true “sign.” This decisive progress, which consists in bringing prevision to bear upon events independent of the action itself, is achieved during the fourth stage in correlation with the objectifying of the relations which characterize this stage in general. In other words, a fourth type of sign is now constituted which we shall call the actual “sign,” which permits the child to foresee, not only an event connected with his action, but also any event conceived as being independent (Piaget, 1952).

The still-face has been found to evoke marked changes in infant behaviour, now known as the still-face effect. Infants typically show increased gaze aversion, less smiling and more negative affect during the still-face compared to during normal face-to-face interaction (Mesman, van IJzendoorn and Bakermans-Kranenburg, 2009). The Still Face Paradigm has been adapted for a number of research purposes, for this research proposal we will examine the emotional cues within the experiment and its effect on the infant during the test.

In conducting a thorough look at the Still Face Paradigm it can be seen that the experiment goes against the rules of appropriate emotional response as it communicated contradicting emotional responses to the infant. Infants use others’ emotional signals to regulate their own object-directed behaviour and action reproduction, and they typically produce more actions after having observed positive as compared to negative emotional cues. Emotional cues can inform infants about potentially harming or safe consequences of performing a certain behaviour, much evidence on the behaviour-regulating function of emotional cues comes from social-referencing research showing that by the end of the first year of life, infants actively seek out and use others’ emotional cues to determine whether to follow their inner drive towards a certain behaviour. Research conducted differ about whether infants preferentially attend to emotional expressions of positive or negative valence, respectively, probably as a function of infants’ age or individual familiarity with a certain emotion (Patzwald, Curley, Hauf, & Elsner, 2018).

In the first part of the experiment the infant is exposed to normal emotional interaction with the adult therefore they react with the appropriate response toward the adult for example to infant displays a happy emotion and is smiling, playful and also interacts physically. In the second part of the experiment the adult’s reaction is contradictory as they suddenly become unresponsive while staring at the infant. This eye contact coupled with no reaction from the adult causes the infant to become confused as it does not align with the appropriate emotional responses they learn during these formative years. Eye activity itself, which is a prominent part of the infant’s behaviour, can provide a clue to what is seen and how it is organized. When under controlled conditions an infant repeatedly looks more at one target than at another (Fantz, 1958).

The infant continues to engage with the adult in hopes of stimulating an emotional response from them by maintaining eye contact, showing suitable facial expressions, using their hands and verbal communication. When the adult shows no change in their reaction the infant becomes guarded and unsociable as well. During this part some infants develop a withdrawn reaction while others cry as a sign of discomfort. This reaction proves that infants have already developed an understanding of emotional norms and responses.

The effect of the adult’s unresponsive demeanour causes the infant to subsequently react with a similar withdrawn response to mirror the emotional cue from the adult. The reaction is very strong in the experiment as the adult is the infant’s mother and thus they have established a strong emotional bond, the state of reciprocity of emotions conveys a powerful message displaying the closeness of their communication.

The Still Face Paradigm and Infants with Autism: A Comparison

In the Still Face Paradigm conducted by Nadel, Croue, Mattlinger, Canet, Hudelot, Lecuyer, Martini (2000), they seek to determine if children with autism have expectancies about the social behaviour of unfamiliar people. The experiment used eight low functioning, non-verbal infants with autism and conducted a modified experiment of the Still Face Paradigm with the participants being unfamiliar adults.

The children’s reactions illustrate the development of expectancies concerning human social behaviour. While they ignored the stranger and did not show any concern about her odd behaviour during the first still episode, they all focused on the adult during the second still episode. In this episode, they exhibited a mixed social pattern of positive overtures and negative emotional expressions which resembles the still face effect found in normally developing infants. These findings suggest that low-functioning children with autism are able to integrate their previous experience with a partner and detect social contingency, but that they are not able to form a generalized expectancy for social contingency in human beings with whom they have not yet had contact. This may explain why they generally ignore strangers (Nadel, et al., 2000).