The Effects of Hair and Eye Color on Attraction

We often wonder what attracts people to their potential mates. It has been established after decades of research that men and women differ in what characteristics they find important in a romantic partner. Both men and women have specified they want a mate who is understanding, kind, dependable, sociable, stable and intelligent (Botwin, Buss, & Shackelford, 1997). But men and women do not always agree on the same desires for their potential partners. Men have a greater desire for romantic partners who are physically attractive. Women on the other hand have a higher desire for romantic partners who have a good earning potential (Eastwick & Finkel, 2008).

Numerous studies in psychological research have focused on the importance of physical attractiveness in heterosexual attraction but minimal research has been done on specific physical features preferences (Feinman & Gill, 1978). Studies that have looked at physical attraction as a specific preference have found it to be an important trait in dating but also noticed it was usually recorded in broad terms like “good looking” and not specific features. Sexual selection has also been suggested as an important strength in human evolution. Sexual selection is believed to be significant in attractiveness standards for physical appearance (Hulse, 1967).

In 2006, researchers Laeng, Mathisen, and Johnsen tested for assurance of paternity by using close up photographs of adult men and young women with either blue or brown eyes. The photographs were rated on attractiveness by young women and men observers also with blue and brown eyes. They manipulated the eye color in the photographs of each model so that the same face would be shown with either the natural eye color or the opposite eye color. The only preference found was that blue eyed men rated the blue eyed women more attractive that the brown eyed women. Another study they ran included both sexes with different eye colors. They were asked to report the hair and eye color of their romantic partners. Their responses indicated mating by eye and hair color. In these findings blue eyed men were the largest group with partners of the same eye color. The results suggest the occurrence of male adaptation of an extra-pair paternity based on eye color, as a phenotypically based assurance of paternity. This is when the father and child’s phenotypes match. It is also a defense against cuckoldry this is when the phenotypes do not match.

In a study by Feinman and Gill (1978), they looked at the popular stereotype in American media and popular culture that proclaims there is a greater desirability of women with light eye color, light hair color, and fair complexion. There were 482 women and 549 men who participated in a questionnaire that indicated their preferences and dislikes for numerous somatic and physiognomic characteristics of the opposite sex. They had a choice to indicate more than one preference of particular characteristic or no preference. They were also asked to indicate specific dislikes for each characteristic, also allowing them to respond multiple or no dislikes. In their findings men indicated a slightly greater preference for lighter women coloration and women indicated a slightly greater preference for darker male coloration.

Manipulating eye color is fairly simple compared to alternating skin tone or facial features. Therefore it is surprising that more research has not been conducted on eye color. One explanation for the lack of research is because people classify eye color as a static signal effective in the human interactive situation (Hickson, Powell & Sandoz, 1987). Static signals are permanent features of the face like skin color, bone structure, and eye color.

There have been a wide range of studies being completed on physical characteristics but a conflicting amount have been conducted on the characteristics of eye and hair color, this helped form this research idea. Men will be more attracted to a woman with lighter hair and eye color.

172 participants took part voluntarily in an experiment on attractiveness. All participants were recruited by word of mouth, links posted on professional websites, and social media websites. Participants had to be over the age of 18 to participate in the study. All of the participant’s information was anonymous and cannot be linked back to them in anyway. There was no compensation given for participation.

There were five blonde confederates used in this study. They were all 21 years of age. They were recruited by one of the researchers. They were given a media consent form stating that they were aware their pictures were going to be manipulated and used in surveys. They were asked to stand in front of a Crayola white poster board. The confederates wore the same Hanes white t-shirt. The researcher took a picture of them using an IPhone 4s camera. The confederates were all aware they would get no incentives for the use of their picture and were also notified they would not be able to take part in the surveys. The confederates’ hair and eye color were manipulated on the program Pixelmator. Confederates’ original photos were used in the surveys, along with a manipulated one which gave them all darker hair and eye color.

After the survey was opened participants had to confirm they were over the age of 18. A consent form also had to be confirmed before allowing the participant to continue. The confederate pictures then appeared in random order to each participant. The same three questions and point scales appeared with each picture, depending on the gender selected. After participants completed the ratings they were asked their ethnicity, age, gender, hair, and eye color. They were then shown the debriefing form before exiting the study.

Data was collected online through the website Qualtrics, where the survey was created. The data was then examined by the researchers. Results from any survey completed in less than one minute were deleted. Short response times were deleted because we did not believe the survey could have been completed in under a minute if the participants were actually giving thought to the questions. The results of participants that had taken the opposite gender’s survey were also removed. The researchers then analyzed the remaining data using SPSS statistical software.

Our hypothesis was supported by our data. There was a main effect of gender and hair color qualified by an interaction between the two. There was a significant difference found between the score for light hair/eyes (M = 3.36, SD = .560) and dark hair/eyes (M = 3.47, SD = .596); t(192) = – 4.69, p = .000. Also from using the paired samples t-test we found that our average was based on three specific confederate’s photos. The other two confederates’ pictures were rated similar with both the light and dark manipulation. Using a within subject design we found that surprisingly, females rated the confederates higher than the males did. This between effects of gender is shown in Figure 1. (talk about interaction factor 1* f/sig(F(1,170 ) = 4.42, p <.05) (add in f terms)

We proposed that males would be more attracted to a female with lighter hair and eye color. The results from our data analyzes supported our prediction. Although, the means were not an enormous difference there is still one present. We were surprised to find that three out of the five confederates had a large influence on the results. The other two confederates had opposite findings and both were rated relatively close in both light and dark photographs. A reason for this may be that participants were judging on static signals instead hair and eye color. Another reason may be that the confederate’s hair did not look natural in the darker color; this may have caused them to rate the original blonde photo higher.

Similar research from Feinman et al. 1978 also found that males had a greater preference for lighter female coloration. In a study done by Hickson et al. 1987 they also manipulated photograph’s eye color. They found men rated the confederate as being more physically attractive. We initially thought that men would rate confederates higher as well.

Specifically, we surmised that men would find women with lighter hair more attractive than women with darker hair. We only used photographs of blondes and brunettes. In future studies it may be interesting to see use of red and black hair incorporated into the survey. Also, we only used pictures of females. There may be a different outcome if females would have looked at male’s photographs, versus judging how they think a male will view the picture. If future studies had a larger sample size the research may be able to find an effect of participants’ eye color changing their views on confederates. Also, asking participants to record their partner’s hair and eye color if they are in a relationship could also be interesting. Future research needs to be done on what attracts people to their potential mates

We were not able to use brown haired confederates because of issues editing the darker hair. The confederate’s different facial features and smiles could have had an effect on the ratings of the photos. Also, the hair lengths and styles were all different, which could have also changed the way they rated the photographs. Because only one researcher collected photographs only five confederate photos were used. The more photographs used could have made it so participants were not noticing they were seeing the same person. Only having a few confederates also may have created a problem because all confederates were age 21, and we had a wide age range of participants in the study. The small sample size is a huge limitation of this research. 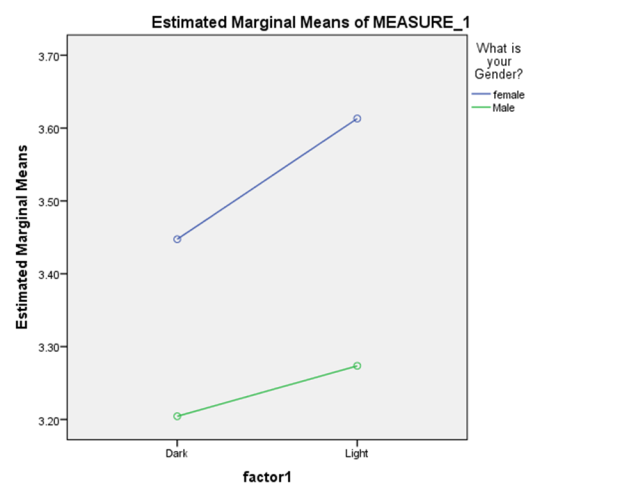