Visual field differences on reaction time and accuracy during enumeration

When people are shown an array of items, reaction times have been found to remain relatively constant till three or four items with few errors. However beyond that number, reaction times start to increase rapidly with more errors. This difference is known to be from subitizing and counting. The word subitizing was first introduced by Kaufman, Lord, Reese, and Volkmann (1949). Subitizing is the ability to know the sum of items without counting, with speed and accuracy. However, counting is a slower process, and used for larger array of items.

Nan, Knösche and Luo (2006) tested 14 right-handed, paid subjects on enumeration with an extra condition of distractors present. Their event related potential (ERP) was also recorded while they performed the experiment. Their results showed that reaction times generally increased with number of targets and distracter items. Further tests showed that there was a significant difference in reaction times between numbers of targets in each condition. Their results do not support the theory of subitizing and counting. In addition, there was no evidence of differences between accuracy rates and number of targets. There was also no evidence of hemispheric dominance in performance in subitizing or counting.

This experiment will be examining difference in performance between visual fields, and reaction time on enumeration. This experiment is a modified replication of the Jackson & Coney (2004) study, we will only be comparing data from 4 items and only from right handed participants. This experiment will aim to determine if their results of right hemispheric dominance can be replicated. This is useful as it would give a better insight about processes in the brain. My hypothesis is that there will be a difference in performance of reaction times and accuracy between visual fields on the task of enumeration.

The independent variable is the visual field of the participant. There are two dependent variables, the response time, and accuracy of reponses. This is a within group design. A repeated t-test was used.

Participants are seated in a cubicle room with adequate light with an Amiga 1200 microcomputer and 1084S monitor. This computer controlled the trial procedure, displaying and timing of stimulus and recorded results. The computer was linked to a monitor outside the cubicle, which displayed error and reaction time scores to the experimenter. Response is indicated by participants pressing 1 of 3 buttons, which correspond to the estimate of 3, 4 or 5 items shown. A chin rest was provided to ensure the participant’s head was 45 cm away and in the middle of the screen. Also, eye movements are tracked using a closed-circuit television system.

Participants are seated in front of the screen and chin rest was adjusted to ensure they are at a relaxed and steady head position. Participants are first shown a blank screen (1000ms), and then a central cross appears for central fixation (1000ms). Stimuli are presented as black dots on a white background (150ms) and the blank screen reappears until they give a response. The whole cycle is repeated again. The number of stimulus ranges from 3-5. They were asked to indicate using fingers to press 1 of 3 buttons. The buttons correspond to 3, 4 or 5 number of items. Half of the participants were told to respond by pressing the button with their left hand and the other half were told to respond using their right hand. This is to control handedness response effects, however the responses from left handed participants are not analysed. Participants were also told to place index finger of their assigned hand above the “3” button and the other fingers on the other buttons. Before the real experiment started, participants are given 10 practice trial runs, but results are not taken into account and the experimental trial is followed immediately. For each trial, stimuli will have equal chance to be either shown on the left or right of the visual field. The locations of the stimuli are determined by randomly placing them in the slots of a theoretical 4×4 grid of the screen. Stimuli cannot be placed into neighboring spots in the grid. There are a total of 30 randomized trials. 10 trials will show 3 items, 10 trials will show 4 items and 10 trials will show 5 items. If an error is made, participants will hear the feedback from an auditory tone. Their reaction and accuracy of responses are recorded. Participants are told to estimate the number of stimuli on screen with priority on accuracy of response over speed. Only data from 4 item displays were analysed.

A repeated measures t-test was conducted to compare visual field and reaction times. There was a significant difference found, t (4) =6.29, p<0.05. Thus, we can reject the null hypothesis, and the results could not be due to chance. We can conclude that there is a difference in reactions times between visual fields.

A repeated measures t-test was conducted to compare accuracy between visual fields. There was no significant difference found, and thus we have to reject our hypothesis. We cannot accept the research hypothesis. T (4) =0.172, p<0.05. This means that the difference in results could be due to chance. 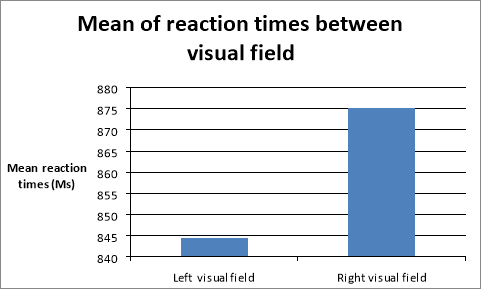 Graph 1: shows the mean of reaction times in ms between left and right visual fields. 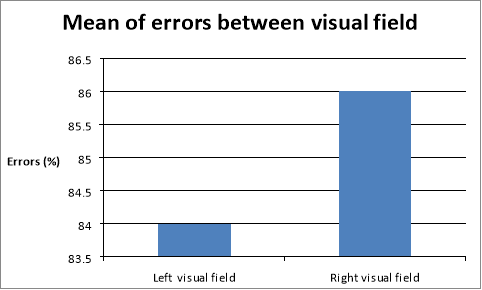 Graph 2: shows the mean of errors in percentage between visual fields.

The results are in contradiction of what Nan, Knösche and Luo (2006) found in their study. They found that there was a significant difference in reaction times between numbers of targets in each condition. They also found no evidence of hemispheric dominance in performance during subitizing or counting. However, we did not analyze data between numbers of objects. We can only conclude that our findings show slight support for our hypothesis, as the overall findings do not fully support our hypothesis that there will be a difference between visual field on the task of enumeration.

However, there is possibility that having significantly faster reaction time is due to strategies employed by participants unknowingly. Trick and Pylyshyn (1994) suggested that people use methods to help them estimate number of items, such as using patterns. This indicates that the differences in results could not be due to hemispheric dominance, but because of these strategies. In Nan, Knösche and Luo (2006) study, reaction times for with 6 items display had shorter reaction times compared to the 5 items. Study by Piazza, Mechelli, Butterworth and Price (2002) tested 9 male participants. Participants were shown a total of 32 different stimuli consisting of black dots on a white background. PET scans were also obtained during the experiment. Piazza et al. (2002) PET scans showed that areas linked to object recognition were activated in both canonical and without canonical arrangements. It suggests that pattern recognition was used in all conditions. These studies suggest that there was evidence of participants using pattern recognition to count items. As a result, these data could skew our data as the differences in reaction time could be due to other factors such as pattern recognition that aid in enumeration.

Enumeration requires the assimilation of information received from visual stimulus has to be integrated first before it can be understood. According to this theory, the process would speed up if the visual stimulus is presented in one visual field. However, Delvenne, Castronovo,Demeyere and Humphreys (2011) propose an alternative hypothesis. They propose that high level tasks perform better when there is bilateral visual field presentation. Their study found that visual enumeration has fewer errors when the items are shown in two visual fields rather than in a single visual field. This bilateral field advantage is seen when more than four items are shown. The authors suggest that this effect is only seen when the task becomes too taxing for our attention.

Further tests should also include results with gender being controlled for, and compare results between unilateral processing and bilateral processing of enumeration. Also, this experiment has threats to external validity as there is sampling bias. It cannot be generalised to the population, because only women participant data was taken into account. Also, if we are testing for visual field differences the results would be skewed if we only take results from the right handed participants. Previous studies such as Bourne and Todd (2004) have shown that handedness does affect hemi field bias in processing. As such, we can propose there could also be a processing bias for enumeration.