New Zealand’s health and disability system has encountered lots of changes in the past decade. In fact, New Zealand spends almost nine percent of its gross domestic product (GDP) on health care which is roughly USD 2,403 per capita. Approximately seventy seven percent of health expenditure by its citizens is shouldered by the government (WHO, 2008). In a more recent study, 2010, in which 14 developed countries were compared side by side on the basis of health spending and medicine use. The result was that New Zealand came in last among other countries which spends USD 3,460 per capita against United States at USD 7,290 (Johnston, 2010)

New Zealand health system does not enclose itself on the health alone but, it includes disability as well. Thus, the health and disability services in New Zealand are delivered synonymously through a complex network of organizations and people (Ministry of Health, 2014).

According to the Ministry of Health (2014), these are the key organizations and people in New Zealand’s health and disability system:

In New Zealand each individual will be issued a National Health Index (NHI) number however, only permanent residents and its citizens have access to free health and disability services that are mostly financed through taxes (Ministry of Health, 2011). Non-residents such as tourist and illegal migrants are charged fully for the cost provided by health institutions. Private voluntary insurance is mostly used to cover cost sharing requirements and elective surgery.

Patients who often visits their physicians or accumulates more than ten visits per year are given a card in which they can avail a lower service rate. Local children under six years are free from consultation and prescription while the rest of the general population is subsidized by the government provided they are enrolled in the Primary Health Organization (PHO). 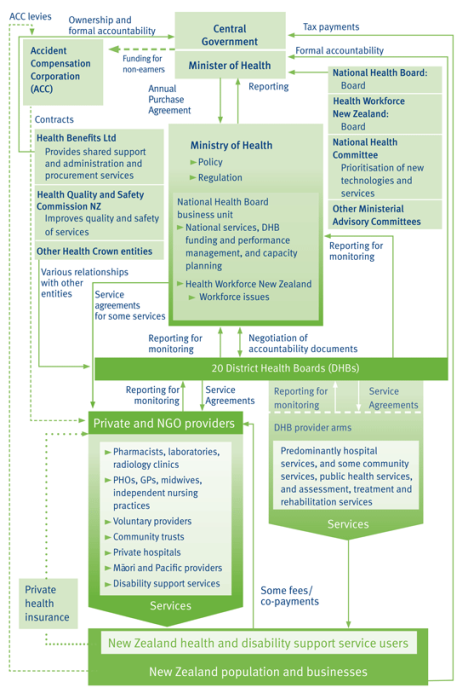 New Zealand health and disability system parts of the structure: