1. The following questions are about measurement

Nominal level is where the variable only measures differences between cases such as gender. This is because nominal level does not need any ordering among its responses.

Ordinal level is where the variable can be ranked but the differences between categories is not available. An example can be educational achievement.

Interval level are numerical scales in which intervals have the same interpretation throughout, such as temperature, but it is unusual to see this used in social science.

Ratio level is an interval scale with the additional property that its zero position indicates the absence of the quantity being measured, such as income.

Better for govt to be formed of one party, or two in coalition? – Ordinal

How many, if any, cars or vans does your household own or have the regular use of? – Ordinal

How many trips did you make by plane during the last 12 months? – ordinal

How many employees do you supervise? – ordinal

How many hours do you normally work a week in your main job – including any paid or unpaid overtime? – Ordinal

Are you now a member of a trade union or staff association? – Ordinal

Do you tend to trust or tend not to trust the police? – ordinal

How old were you when you completed your continuous full-time education? – Nominal

How important to always to vote in elections – ordinal

People who want children ought to get married – ordinal

To which of these groups do you consider you belong? – ordinal

How important to help people in the rest of the world who are worse off than yourself: – ordinal

Knowing the level of measure can help with how to interpret the data from that variable. This also means that the appropriate statistical analysis used on certain values because if the value was nominal then data would not be averaged or use a t-test on the data.

2. You are required to report some descriptive statistics. Report your findings using any charts or tables you think are appropriate.

69.5% (valid percent) believe it is better for government to be formed of one party on its own.

3. The following questions are about the number of employees respondents supervise .

The greatest number of employees who responded to the report of supervising was 3000. 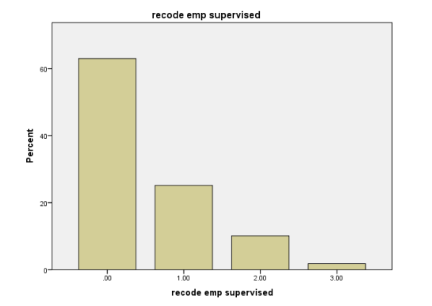 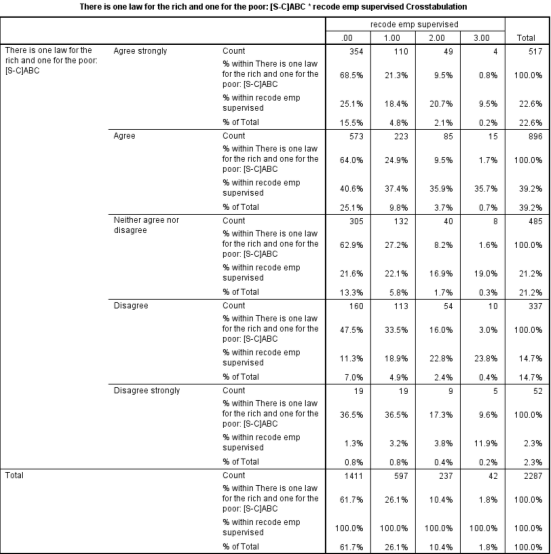 25.1% respondents who supervise 0 employees agree strongly there is one law for the rich and one for the poor.

4. The following question are about the age respondents were when they left education and their scores on a welfare scale.

We can be 95% confident that the mean on how old were you when you completed your continuous full-time education is between 18.64 and 19.47. This is significant due to significant value is less than the alpha value of 0.05, which means we can reject the null hypothesis.

The mean is insignificant when testing at value of 3 so this means we cannot reject or accept the null hypothesis.

5. The following question is about hypothesis testing and statistical significance.

Sampling distribution is where the possibility of obtaining each likely value of a statistic from a random sample of a population.

6. The following questions are about behavioural and attitudinal differences between members of the sample. For each question you must select the appropriate test of significance, report relevant SPSS output and an interpretation of your results.

a) Is respondents’ trust in the police independent of their race? Which test did you use and was it statistically significant?

I used the Chi-squared test on the data. You could argue that the data does show that the respondents trust in the police may not be independent of their race, however I do not believe this was statistically significant due to needing a larger sample size to being to prove or disprove this hypothesis.

I used the Kruskal Wallis test. You could argue that the data does show religion has a higher mean rank then to how important to help people in the rest of the world who are worse off than yourself. This is not statistically significant as it does prove or reject the null hypothesis.

I used the Chi-squared test on the data. There is not much difference males and females in regards to what age they left education so this statistic test was statistically insignificant.

7. The following questions are about modelling the relationship between belief in always voting in elections and respondents’ age. Please include all relevant SPSS output and interpret your results.