Prime Minister Malcolm Turnbull has slammed the South Australian renewable policy following recent repeated events causing state-wide blackouts and chaos, however, according to other media sources, the opposition has also been stating that the renewable policy is not to blame. Kai Johnston reports.

The news implements a variety of persuasive techniques such as attacking, providing evidence or silencing point of views. All of this is deliberately used to reinforce an idea to influence their audiences’ attitudes, values and beliefs of the turmoil of the South Australian renewable energy policy. This policy has been viewed by numerous news reports as a crisis that has crippled the entire state’s future, with some reports blaming the Labor’s renewable policy and other reports blaming mother nature.The causes of this crisis have sparked intense political debates and clashes between the federal Liberal and Labor parties, and even from multiple mass media sources.

The South Australian renewable energy policy was an initiative imposed by the SA state Labor government in mid-2009, which sought to increase the renewable energy target to 33% by 2020. This initiative was supported through federal and state funding to achieve these targets. Since 2009, the state government has provided funding for development of renewable energy processes and farms, allowing this target to be achieved within 5 years of operation in 2013. In 2014 a new goal of 50% renewable generation state-wide was set to be achieved by 2025 and so this push commenced with an estimated $10 billion to fund the program. However, the rapid drive towards renewables has recently resulted in multiple blackouts over the past few months. This has sparked a massive blame game from both sides of Parliament with Liberals marketing that the introduction of wind and solar has made the power grid very vulnerable. While Labor argues that transmission lines were broken in the severe storms that rocked the state at that time.

“Green dreamers are weaving baskets in the dark” is an article authored by Janet Albrechtsen for The Australian. This article is heavily opinionative and contradicts every aspect of the Energy Policy with a spicy, heavy tone that slates the Labor party who was responsible for this policy. Albrechtsen describes the South Australian energy policy as the “biggest policy hoax in the modern era.”

“There’s one thing worse than a bunch of deluded commentators who treat green energy as a religion And that’s the South Australian Labor government.”

The author’s approach to this issue and utilization of persuasive techniques in this text are quite obvious, in fact her entire article is full of emotive and attacking language directed at the Labor party. Albrechtsen’s article also includes an array of evidence through explained statistical inquiries that help support this attack against Weatherill’s policy. His policy has promised “a transformation of the economy“, “more jobs” and an “increased drive in investment“. However, according to the author’s evidence, these promises have not been fulfilled since renewables were introduced, but instead, they have led the state to accumulating the reputation for the lowest; employment, economy, business investment and growth throughout the entire nation. South Australia’s electricity prices have also doubled as a result of the policy as indicated in the article, the author also mentions how the difference between feeling good and doing good is now irrefutable.

The author uses the repetitious statements “it doesn’t feel good” to effectively reinforce that renewables are crippling the state, and by invoking sympathy from the readers, this technique has potentially established a foundation that has persuaded the readers to agree with her perspective.

Opposing this attack on renewables is a Sydney Morning Herald article by Mark Kenny, with the headline ‘PM Malcolm Turnbull and ministers were told wind not to blame for SA blackout’, which also uses multiple persuasive techniques to convey the writer’s opinion in a more subtle attack. The author, has constructed the article with a sense of expertise and superiority over Mr Turnbull, arguing that wind is not to blame while using quotes to support his idea.

“There has been unprecedented damage to network, with 20+ steel transmission towers down in the north of the state due to wind damage” – Energy Market Operators

Kenny utilizes emotive language and evidence through quotes from the energy market operators to imply that the cause of the blackouts was from some freak storm that damaged transmission lines.

This quote has been deliberately used to manipulate the audience’s thinking to see that Mr Turnbull is capitalizing on the power crisis by lying to the nation to secure his votes. Butler implies that Turnbull is over-reacting and has been caught laying the blame on to Labor’s renewable policy when in actual fact, normal coal fired power generation would have also failed if subjected to these storms. Kenny manipulates his readers to view these blackouts as a result of catastrophic, once in a lifetime weather occurrences, hence contradicting Mr Turnbull’s political ‘blame game.’

The article ‘Labor can’t keep the lights on’, which was written by Rosie Lewis for The Australian’. This takes a more frustrated and aggressive approach to the renewable argument than the previous article. This text attacks Labor’s renewable policy throughout by repeatedly stating that they have failed planning for and generating enough backup electricity to keep the grid ‘above water.’

Turbull is quoted as saying “They’ve failed to do the work to ensure South Australians can keep the lights and air conditioners on.”

Persuasive techniques such as the quotes from Mr Turnbull, include attacks on the policy and the use of emotive language to influence the audience. It also reinforces the idea that the South Australian Labor has not only failed, but crippled the state with a lack of planning. 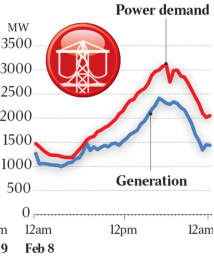 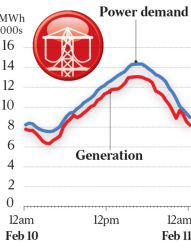 The graphs illustrated above shows the energy generation in comparison to the demand at certain times of the day. The implementation of these graphs allows viewers to clearly observe the significant issues associated with wind generation against the power demands, these graphs have been used to reinforce and add more credibility and persuasiveness to the argument that renewable energy is not a reliable source.

“SA power: How the State Government plans to fix energy crisis” is an article authored by Daniel Wills for the SA paper, The Advertiser. This text acts as a response to the political blame game, as it sheds the blame off from the Labor’s back, that has been conveyed by Mr Turnbull, and attempts to redirect this blame towards the Energy Market Operators.

“We have to step up and take control of our own future, and we are determined to do that.” -Mr Weatherill (S.A Labor premier)

Wills has utilized these quotes to establish a point of view that something needs to be done to prevent further blackouts and to imply that the energy operators have left South Australia in the dark. These quotes use the techniques of inclusive language, urgency and appeals to hope to establish a call to arms for the audience to feel compelled to stand with Mr Weatherill. In this report Wills has been able to persuade his audience to believe that it was the market operators who did not ensure the reliability of power at the times when the state needed it the most.

With the battle of politics waging and news treatments jumping in on the action, it is impossible to understand the simple questions we all have on our minds. What really did cause this crisis and who are we to stand alongside?