Is social trust a cause for civic disengagement in the last few decades?

In the last few decades since the Post War period, there has been a sharp decline in civic engagement in world democracies. Civic disengagement is mostly reflected in low levels of electoral turnout, low volunteering activity, low levels of social capital and social trust.

This research will base its literature review upon two different theoretical arguments; one theory based on Robert Putnam, Dietlind Stolle et al., argue that the main cause for low social trust levels rests on ethnic diversity and that more homogenous communities have higher levels of social trust which in turn leads to more social capital. Whereas Natalia Letki develops a counterargument in which refers to social deprivation being the main cause for low levels of social trust but nevertheless it is neglected by many analysts which primarily focus on ethnic diversity. Based on the methodology, the research will conclude whether to accept the working hypotheses and reject null hypothesis and decide which theoretical argument fits better based on the results.

The topic raised by this research is of great significance as the rise of civic disengagement is a problematic evidence in world societies that needs to be addressed and be given importance. The absence of social trust causes setbacks to social cooperation, civic activity and creates individuality and social divisions in a community. This research attempts to raise awareness by analysing these problems and provide a series of solutions that could be used to boost higher levels of social trust in a community in order to increase civic engagement.

Social trust is strongly associated with many other forms of civic engagement and social capital; people who trust their fellow citizens volunteer more often, contribute more to charity, are more engaged and participate more often in community organizations, serve more readily on juries, comply more fully with their tax obligations, are more tolerant of minority views and display many other forms of civic virtue (Putnam , 2000, p. 136).

The issue of diversity in relation to trust is widely discussed between political analysts. Robert Putnam, Dietlind Stolle et al., argue that social and all elements of social capital are unlikely to happen in multi-ethnic community as neighbourhoods, regions or states with more ethnic, racial experience substantially low levels of social capital and cooperation which hinder collective action and social welfare. According to Putnam trust should prosper in homogenous settings and suffer when faced with heterogeneity. ‘Trust seems easier to develop when we are familiar with the people around us, and particularly when they appear similar to ourselves’ (Stolle , et al., 2008, p. 58). This theory argues that ethnic and racial differences discourage reliance on the behaviour of one’s neighbours, friends and colleagues, thereby reducing levels of interpersonal trust, the capacity for cooperation and support for collective action.

On the other hand Natalia Letki, counter argues that the main factor undermining all types of interactions and positive attitudes among neighbours is low-socio economic status as opposed to ethnic diversity. She further develops that many analysts often combine ethnic diversity with social deprivation which leads them to cause a direct correlation between ethnic diversity and low levels of social capital; deprivation is the major factor eroding community relations and negatively tinting ethnic diversity due to correlation of ethnic diversity and social deprivation (Letkin, 2008, p. 101). She agrees with Putnam’s theory that diversity may well have a negative effect on individuals’ propensity to interact with fellow neighbours; however, once the interaction takes place, its effect is positive: the attitudes of racial hostility, distrust and prejudice are overcome and an individual becomes more favourable towards other people in general (Letkin, 2008, p. 105). According to her, common principles and shared values can also be founded in multi-ethnic, multi-faith and multi-cultural societies (Letkin, 2008, p. 103).

As for this multivariate analysis, the main dependent variable of the model tested in this research is neighbourhood social trust, which is regressed at the individual level on social volunteering, ethnic diversity, social deprivation, education and age.

This research hypothesises that low social trust levels are mainly affected by social deprivation rather than ethnic diversity, therefore supporting the theoretical argument from Natalia Letki. It also hypothesises that the ethnic diversity can also have a significant impact on social trust level in a short term period, but it is unlikely that this variable will continue to have a significant impact in the long run once the interaction between diverse ethnicities takes place, its effect is positive: the attitudes of racial hostility and prejudice are overcome, and an individual becomes more favourable towards other people in general, increasing levels of social trust. 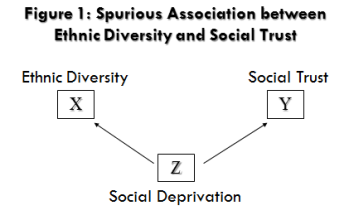 To answer this research question it is necessary to use statistical data to support the argument. The raw data supplied is from SPSS statistics which this research will work with. The table below shows the data results accounted for each variable in the model. Data results were coded from respondents which were asked how much they are likely to trust an individual based on nine different variables in the model. Note that only the most important/significant variables are illustrated graphically. 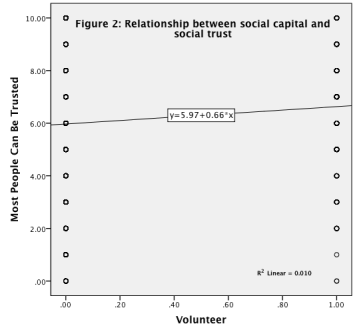 Volunteering measures social capital levels. Its P-value is smaller than 0.05 and therefore, we reject the null hypothesis as there is an association between social trust and social capital controlling for all other variables in model. The association is positive as B coefficient is 0.492 and this means that as volunteering levels increase social trust is also increasing. This positive relationship is illustrated graphically in figure 2 and through the slope of the line of best fit, it is possible to see the type of relationship between the dependent and independent variables. 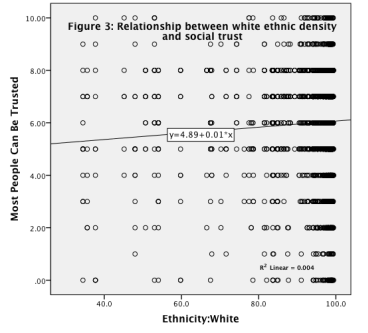 Ethnicity-white, measures the white population density where respondents live in relation to social trust. P-value is bigger than 0.05 and so we accept the null hypothesis as there is no association between white ethnic density and social trust when we control for all other variables in the model. 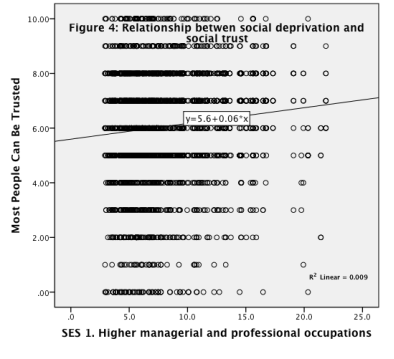 Social deprivation is measured through social class and professional occupation. P-value is less than 0.05 and so the null hypothesis is rejected as there is an association between social deprivation and social trust when we control for all other variables in the model. The relationship is positive as B coefficient is 0.40 meaning that as the levels of social status increase, social trust also increases. This is graphically illustrated in figure 4, as the slope of the line is upwards. 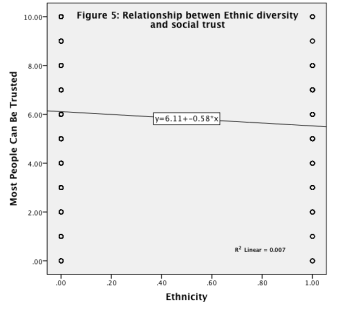 Ethnicity measures the ethnicity of the respondent against social trust. It is a dummy variable 0= white, 1= ethnic minority. Its P-value is less than 0.05 and the relationship is negative as B coefficient is -0.548. We reject the null hypothesis as the there is an association when we control these two variables in the model. This is graphically illustrated in figure 5. 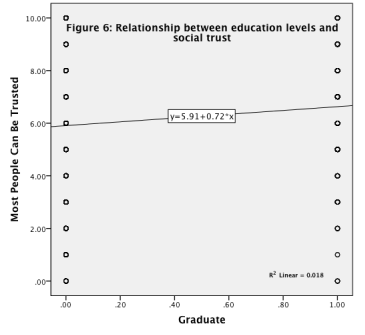 Graduate measures the level of education against social trust. Its P-value is smaller 0.05 and there is a positive association between the two variables when we control the two variables in the model as B coefficient is 0.775. This means that as number of graduates increase social trust levels will also increase. This is graphically illustrated in figure 6 through the slope of the line of best fit. 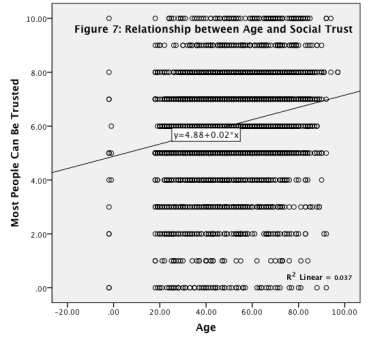 The P-value is smaller than 0.05 when age and social trust are measured. There is a positive association when we control both variables in the model as B value is 0.21. As age increases social trust also increases and this is graphically illustrated in figure 7 through the slope of the line of best fit.

To conclude this research, it is important to link the results from the data with the two distinct theoretical arguments from Putnam, Stolle et al. Based on the results, it is more plausible to accept Letki’s argument in which social deprivation has a bigger impact on social trust levels than ethnic diversity. The B coefficient for social deprivation is 0.40 and 0.004 for white ethnic density when both are measured against social trust. The slope of the line is more positive for social deprivation meaning that the higher the levels of social status the higher impact it has on social trust levels, if social status decrease then social trust will immediately decrease. Therefore we agree with the argument Letki makes on social inequality affecting social cohesion – ‘Individual-level deprivation, regardless of one’s ethnic background, limits opportunities to participate in social life and exercise civic rights and neighbourhood deprivation is associated with poor living conditions and disorder’ (Letkin, 2008, p. 101).

It is also important to name a few solutions that could be used to increase social trust levels in a community. Firstly, we need to mobilise people to engage. Mobilisation is a very consistent influence on civic engagement. People who are asked to undertake a particular action are more likely to be civically active than those who are not, particularly if they are asked by a close acquaintance. Therefore, people respond most readily to requests from friends and family. But failing that, they are also responsive to requests from more distant acquaintances – better to be asked than not to be asked at all (Pattie, et al., 2003, p. 461). Also people also need to be persuaded to take more actions inside a community, as Putnam suggests it seems that encouraging people to join clubs, societies and voluntary organisations helps engender some form of civic action. Social trust is often emerged through collective activism, as individuals interact more with each other in any kind of social activity they become more familiar and confident with the surroundings and other individuals around them.