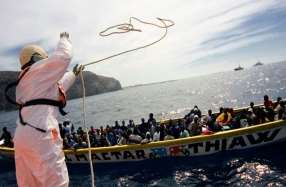 Illegal migration, “the presence on territory of a Member State, of a third-country national who does not fulfill, or no longer fulfils the conditions of entry as set out in Article 5 of the Schengen Borders Code or other conditions for the entry, stay or residence in that Member State”[1], is a pressing reality for the European Union and will increasingly affect a wide range of issues. The significance and complexity of illegal immigration by sea is rivaled only by the lethargy with which EU institutions and member state governments have acted. This document will provide a background of the current situation, introduce and explain relevant EU institutions and briefly explain the effects that illegal migration by sea has on the EU system. In confronting these challenges at the eleventh annual Chicago International Model United Nations, delegates should recall the words of Chicago’s master urban planner, Daniel Burnham:

“Make no little plans. They have no magic to stir men’s blood and probably will not themselves be realized”

Background of Illegal Migration by Sea:

In assessing the status of migration to Europe by sea, it can be affirmatively stated as existing in a state of permanent crisis. The Migration Policy Centre further cautions that the relationship between challenge and opportunity in migration as a whole is unbalanced by illegal sea migration, and notes in its annual report to the EU that “while well-managed migration may foster progress and welfare in origin- as well as destination countries, its mismanagement may put social cohesion, security and national sovereignty at risk”.[2] The Migration Policy Institute[3] delves into more details and articulates some of the key aspects of this crisis, citing the negative impact of “undermining the rule of law, fostering labor exploitation, increasing poverty (by taking jobs away from native workers or adding to the numbers of poor in a country) , and putting pressure on public services.”[4]

Operating within this state of affairs is the current situation in 2014, which the EU’s external border security agency Frontex’s[5] annual risk analysis calculates to be a record-breaking year for illegal sea (as well as air and land) migration.[6] In its report, Frontex notes that:

“Migration towards the EU in 2013 was characterised [sic] by three main phenomena: a significant increase in the number of Syrians arriving, a steady flow of migrants departing from North Africa and heading across the Mediterranean to Italy, and a sharp increase in detections of irregular migrants on the Western Balkan route.”

This seemingly ever increasing volume of migrants finds its constant in its ever changing composition. Separated by geography and language, thousands of illegal migrants attempt the journey into the EU for the same reasons. In an effort to be readily accessible to delegates, these reasons are briefly and broadly listed here: 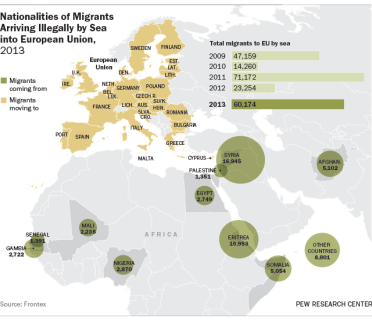 Delegates should continue to be mindful that this list is neither intended to, nor is, a comprehensive summation of the motivations and external factors behind illegal migration by sea (or any other route) into the EU.

Geopolitics of Illegal Migration by Sea

Given the geopolitical nature of migration, a visual data map is useful in understanding written analysis in terms of distance, geography and other, more human factors. In addition to understanding the data map provided here, delegates would be prudent to seek out and understand a variety of maps and data.

Illegal migration by sea into Europe makes international headlines regularly and EU policymakers have been under both political and public pressure for several years now. However, the national governments of EU member-states respond to illegal migration in a wide variety of ways. As the Schengen Agreement[7] has removed internal borders, it is the external border that requires extensive collaboration between national and EU institutions[8]. Frontex’s annual reports provide greater understanding of the macro-level patterns of migration. One of the important things that can be discerned from the reports is that while the migrant corridors are constant (such is the nature of geography), their appeal is volatile and subject to change with the tides and crosscurrents of European, African and Middle Eastern geopolitics. In 2009, the greatest number of illegal migrants entered the EU after coming ashore in Albania. In 2012, this eastern Mediterranean route had shifted south to Greece. In 2013 and at the time of this writing in 2014, the majority of sea-faring migrants seek to reach Europe through Italy, Malta, Spain or Greece. [9] For these migrants, UNHCR data indicates that the most common current starting point is Libya.[10] Libya’s attractive qualities include a present state of lawlessness and a long, unpatrolled Mediterranean coastline.

As with any complex issue involving the institutions and apparatuses of a bureaucracy, illegal migration to Europe by sea is fraught with important differences in terminology. There are currently 28 EU member-states, resulting in 28 different immigration policies. And while the MPI notes that that some of the elements of those 28 systems are “in the process of harmonization (notably asylum)”[11] it concludes that “ultimately, unauthorized migrates are categorized as such by the states into which they migrate, and EU Member States have not reached a common definition of this migrant population”. [12] In this climate of disharmony among the member-states, this section is intended to provide delegates with introductory remarks pertaining to some of the tools the EU and member-states employ with regards to the topic at hand.

A military/humanitarian effort by Italy that operates in the Mediterranean. Launched in response to a highly published episode in October 2013 during which 360 drowned off the coast of Lampedusa, a small Italian island situated half-way between Sicily and Africa, Mare Nostrum has been a humanitarian success[13] and an economic burden Italy resents. In the same vein, Mare Nostrum is not only a drastic reversal of a long standing Italian policy on returning migrants at sea to Libya, but a point of contention between Italy and the EU. During an August 2014 G6 meeting, Italy’s interior minister, Angelino Alfano held a press conference during which he stated that “with regard to immigration, Italy has once again shown itself to be a world champion in hospitality,” But he added that, if the European Union and its border management agency did not take over the operation, “the Italian government will have to take decisions on the matter”[14].

Officially, the European Agency for the Management of Operational Cooperation at the External Borders of the Member States of the European Union, Frontex “promotes, coordinates and develops European border management in line with the EU fundamental rights charter applying the concept of Integrated Border Management”[15]. However, Frontex’s successes in vigorous data collection and risk analysis has been tainted by criticism of its responsibilities and parameters. For example, Frontex currently has no mandate to search for or rescue migrants at sea and has maintained that “this remains a competence of Member States”[16]. However, Frontex does have primacy in coordinating cooperation between member-states that do conduct such operations and this discrepancy is problematic, to say the least.

Eurosur (European Border Surveillance System) is an information network designed to reduced barriers to the exchange of information between EU member-states. Specifically, information that pertains to “unauthorized border crossings and to the risks to the lives of migrants, cross border crime, crisis situations and suspect vehicles at external borders”[17]. Eurosur is slated to be fully operational by December 1, 2014. Delegates are encouraged to keep this in mind as the conference will be ongoing during the first few weeks of a full realized Eurosur. What is already readily apparent however is that Eurosur will be no more or less than what Frontex and member-states make of it? While it could prove useful in early detection and rescue of migrates, it also has the potential to bring to the fore a question that the EU, and this committee must grapple with. Namely, what specifically do to with those who have been rescued?

Illegal migration by sea gives a new name to an old problem. The movement of peoples in search of a better life. In doing so it has exposed an unnerving lack of solidarity among EU member-states even as the tools and institutions of the European Union increasingly overlap. But the union is nothing without the national governments of member-states and this conclusion leaves delegates with more questions than answers. For example, if the financial burden of sea rescue operations was spread across the EU, would the Mediterranean members expand their programs or would an EU budget merely replace, rather than complement a national one? Questions like this, as well as possible answers are to be any delegate’s most stalwart companion before and during the conference.

[7] The Schengen area allows freedom of movement for all travelers, irrespective of citizenship. Schengen comprises all EU member-states with the exception of the UK and Ireland. EU member-states Cyprus, Romania, Croatia and Bulgaria are legally obligated to join and are in the process of implementing the Agreement. Additionally, European Economic Area (EEA) states Switzerland, Iceland, Lichtenstein and Norway are within Schengen.

[13] With 62,982 people rescued by the operation thus far according to figures released by Italy’s Interior Ministry