Opinion poll “is a type of survey or inquiry designed to measure the public’s views regarding a topic or series of topics” (Nielsen, 2007). The First poll was initiated in 1824 and straw polling was the first method used. (Hillygus, 2011)

There are different types of opinion polling, few of them are Straw polls, Benchmark polls, Bushfire polls, Tracking polls, Entrance polls, Exit polls and Push polls. These polls are used as strategies to predict the voting of a campaign for a presidential election or how people feel about an issue in the country or issues of the globe (Davison, 2016). Straw poll in simple terms is an informal opinion survey. Benchmark poll is conducted at the very beginning of a campaign before the voters’ decision, it is done to estimate how well the candidate is doing at the beginning of a campaign. Tracking poll is a method where the opinions are taken with short intervals and the average is taken of the polls. Bushfire poll is taken in-between benchmark poll and tracking polls. The number of bushfire polls depend on the how competitive a side is and how much money is spent on that campaign. Entrance poll and exit polls are taken the day of the election. The opinion taken before the person give their vote is entrance poll and the opinion taken after the vote is exit poll. Push poll is a way of influencing a person by giving false information for an issue. It is done by showing that a poll is being conducted. Large number of people are contacted and no effort is made to collect data. Push poll is generally viewed as negative method of polling and is banned in the United States. (Boundless 2016).

For this report the journals, newspaper articles and research papers were collected via internet. Data have been gathered from journals, research papers, new paper articles and websites which relates to this topic. To ensure that the information collected is accurate for a journal and research papers, make sure they are taken from a reputed web page, where they are published , is it from a university press or by a professional society. Research about the author, see if the author is from a university or another institute and if the journal is cited with other sources it can give further credibility. Data from new paper articles and websites are tricky because there can be so many scams in the web, therefore when using their information, you need to research if there is an author or a publisher, the date the article was released, is it from a reputed website which has an ending of .edu, .gov, or an article written by a university. Finding other source that can cross check the validity of the information makes it more reliable. Most of the data collected are quantitative data. The writers prove their information by providing statistical evidence. The reason for this is opinion polls mainly involves numbers to estimate their results.

Opinion polls helps to know the populations view point towards an issue without having conduct campaigns or elections. Furthermore, Opinion Polls have played an important role in predicting elections. One of them is the election of 2010 in United Kingdom. 10 poll results were shown and 9 of them all showed the same scenario, representing that Conservatives party were clearly in the lead.(Nardelli, 2015)

However, In the recent years some of the polls have not being able to accomplish their goals. One of them is the UK election 2015 (Cole, 2015) and the other The EU referendum where the votes of United Kingdom leaving European union was 48% while United Kingdom staying was 52% (Edwards, 2016) (Barnes, 2016). Opinion polls have not only failed United Kingdom but also the United States. The polls of Presidential election between Hillary Clinton and Donald Trump. Polls from Yougov and Fox News have stated that Hillary Clinton was a 3-4% in lead of Donald Trump. (Skibba, 2016)

The reason for the unsuccessful polls can be explained by how the data is collected and other factors that affect the result. Opinion polls are collected by conducting surveys. The common ways are telephone calls, face to face interviews or mail (Roper Center. (2015). The surveys are conducted in random samples which would help to make an prediction and understanding of the opinion of the wide population as a representative. Poll groups mostly use a sample size of thousand .The result survey that consist the sample of thousand or twenty thousand should be similar if the sample is representative.(Macreadie, 2011). The samples taken will have a margin of error. For sample size of thousand it would be +/- 3% and for two thousand its +/-2%. The smaller the sample, less accurate and a greater margin error. (Wells, 2011). Although lately poll groups seemed to have difficulties in performing surveys accurately. Specially telephone polls, which the most common and cost effective method. The reason behind this is the number of people using landlines has decrease greatly with the increase in technology which has led to using mobile phones. In 2013, 41% of US houses had mobile phones than cell phones. This was an issue to the polling groups because 1991 Telephone Consumer protection Act means that autodialling cell phones is against the law. Therefore to conduct mobile phone surveys, they have to manually dial the numbers, which makes the process expensive and time consuming. (Chalabi, 2016). Furthermore, Pew Research have estimated that the response rates in telephone survey in 1997 was 36% and have decreased greatly to 9% in 2012 (Pew Research Center for the People and the Press, 2017). 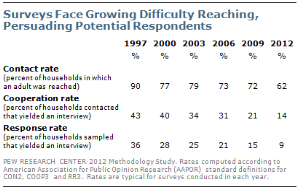 This is not the only aspect that makes the polls less reliable, the increasing in population from years makes also issue because the percentage of the total population completing a survey will decrease. Another problem is the last-minute change in decisions of the voters, this was a great impact on the UK Elections 2015. In February 19 % of the voters had not decides their bid and about 30 % of the voters announced that they might be persuaded to change their mind. (Healy, 2017) In addition most voters that was interviewed in the random samples could have been supporters of one political party, therefore the polls of one party could have shown to be greater.

As mentioned above opinion polls have played an important role in predicting elections, however with the results of the recent elections have failed to trust it. The decrease of the respond rates, difficulty of conducting telephone surveys with mobile phones being used and the increase in population, are issue that poll groups face. Furthermore, these issues keep increasing which makes the polls less reliable.

Pew Research Center for the People and the Press. (2017). Assessing the Representativeness of Public Opinion Surveys. [online] Available at: http://www.people-press.org/2012/05/15/assessing-the-representativeness-of-public-opinion-surveys/ [Accessed 17 Jan. 2017].