How do the media shape public attitudes to welfare provision?

Research has shown that in previous spells of economic crisis that the public’s attitude to welfare provision grows more sympathetic (Taylor-Gooby, 2004, as cited in Clery, 2012: 2) and, therefore, during the current economic crisis within the UK, we would expect that this trend would continue. Clery (2012: 17), however, found that the public are more sceptical about the welfare system and that there is ‘less enthusiasm about public spending on all types of benefits and an increasing belief that the welfare system encourages dependence’. The media is widely cited as being a cause of this shift in public attitude to welfare provision.

The ubiquitousness of the media gives potential to ‘educate, raise consciousness and shape public attitudes’ (Kinder, 1998 as cited in Bullock, 2001: 229) on issues, such as welfare, particularly when there is no personal experience or background knowledge of the issue.

There are many news stories which highlight a high proportion of fraud within the welfare system, primarily focusing on single parents, unemployed and disabled. Benefit fraud has always been an issue but ‘there is very little evidence to suggest that fraud is a major problem….however, there is a widespread belief that the system is riddled with fraud’ (Spicker, 2011). Evidence from DWP (2014) suggests that official and claimant error is actually higher than benefit fraud within the UK (see Figure 1.1) and fraud by unemployed claiming Jobseekers allowance is at the lower end of the scale (Figure 1.2).

Figure 1.1: Estimated percentage of expenditure overpaid due to fraud, claimant error and official error since 2005/06 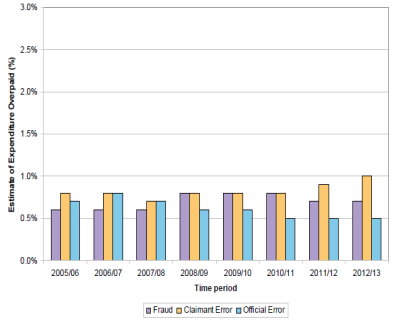 Figure 1.2: Which Benefit has the Most Fraud and Error Overpayment 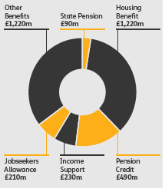 Another frequent story within the British media is that of single mothers abusing the welfare system, thus labelling all single mothers and attaching a stigma of the ‘welfare queen who exploits the system to live a lavish lifestyle’ (Lipset, 1990, as cited in Bullock et al, 2001: 230).

Wilthorn (1996, as cited Bullock et al, 2001: 234) demonstrated that welfare recipients are one of the most hated and stereotyped groups in contemporary society and a series on poverty by Parisi (1998, as cited in Clawson and Trice, 2000: 54) illustrated how the ‘media perpetuate stereotypes of the poor as lazy, sexually irresponsible and criminally deviant’. Larsen and Dejgaard (2013: 288) argue that such stereotypical images created by portrayal of welfare recipients in the media are difficult to remove and that they have a significant impact on the public determining whether they perceive claimants to be deserving or not. Stereotyping these groups ‘acts both as a justificatory device for categorical acceptance or rejection…to maintain simplicity in perception and in thinking’ according to Allport (1954; 1979: 192).

Sotorovic (2000: 269) demonstrates, however, that journalists believe they accurately report on issues which are important and reflect the public’s point of view, however the opinion of Jones (2014: URL) contradicts this:

‘The Government and…the media have fed us a relentless, poisonous diet of “skivers” and “’scroungers”, of the feckless and workshy hiding behind blinds, subsidised by you, the hard-working taxpayer, who have to get up in the morning and slog your guts out. It was the behaviour of those at the top of society which led to a surge in unemployment… and hundreds of thousands driven to food banks in one of the richest countries on earth…. it is the behaviour of those at the bottom of society that has been scrutinised, poked, criticised, and demonised’.

There are some claimants who take advantage of the system and live off the taxpayer, however the minority who do are thrown into the public’s eye through competitive truth-stretching headlines, selective reporting and pictures to provide ‘texture, drama and detailed images’ which illustrate the ‘taken for granted’ and the ‘goes without saying’

There has been an increase in negative language used by the media over the past 10 years (Figure 2) with language referring to non-reciprocity/lack of effort escalating at the time of New Labour’s third term reforms and the Conservative’s ‘Broken Britain’ agenda. It could be argued that this marked a shift in the public discourse of welfare in the UK to an ‘essentially individualistic ethic of responsibility’ (Dean, 2004: 78).

The negative language seen within media in the UK does not appear cross-nationally. Larsen and Dejgaard (2013) argue that this is due to institutional models of welfare and the UK’s move from a soft social democratic regime to a harsh liberal one which creates deservingness discussions in the media, often highlighting laziness as the cause of poverty which may be due to the liberal ideologies of individualism and responsibility. The study found that media within the contrasted Nordic social democratic countries tended to focus on welfare in a more positive light referring to the ‘deserving poor’, with no blame on the claimants. It would appear that the high levels of perceived undeservingness and the negativity towards the poor and welfare recipients may be due to the means-tested and non-contributory welfare system in the UK (Larsen, 2006, as cited in Larsen, 2013). Larsen (2013: 298) also suggested that political orientation may be reason for the negative depiction within the media, particularly given the scandals surrounding the Murdoch Empire.

At the time of the Conservative’s election manifesto, The Sun Newspaper publicly announced that they had lost faith in the Labour party and would support the Conservatives in the upcoming election (Brook and Wintour, 2009: URL) to fix the broken society which we live in. This support of one of the largest newspapers within the United Kingdom may have had a large impact on their reader’s opinion, shaping their belief that society was broken, and a change in government with subsequent welfare reform was required to make it better, rather than looking at the real broken Britain: the reasons for the economic crisis rather than focusing on the vulnerable, the reasons for high unemployment and the £25b outstanding from wealthy tax dodgers. It leads to an argument whether the media should be able to publicly support any governmental party or whether they should remain impartial rather than inflict their political ideology onto the public.

Liberal ideology and social class also had a strong influence in the reporting of two missing girls, Madeleine McCann and Shannon Matthews. Whilst both girls were around the same age, their different class backgrounds demonstrated media bias in the reporting of the two cases and there was belief amongst the media that Madeleine was worth more as she was from a middle class background and a substantially higher reward was offered for her safe return. On the other hand, Shannon’s disappearance was used as a political tool on ‘scroungers’ and ‘to fix broken Britain’ (Jones, 2012). The signs are that the media is and will become more dominated by the most privileged (The Sutton Trust, 2006) which will create further bias and inequality within the industry, therefore The National Union of Journalists need to toughen up, ensuring that journalists operate ethically and morally and not as they did in the Matthews case.

The media has been the most widely cited cause of influencing public attitudes, it is however clear that there are other factors: ‘the image of claimants as social parasites was evident long before the press became a major factor influencing opinions; the rejection of the dependent poor goes much deeper’ (Spicker 1984, as cited in Turn2Us, 2012: 54). The media, policy and the public are interconnected and they can influence each other, however the media has the opportunity and the power to reach the widespread public through newspapers, television, social media etc. It stands that if the media continue to use their ideological-driven partisan reporting to fuel misconceptions rather than give facts, the era of welfare cuts and austerity will prolong with the eventual demise of the welfare state, as believed by almost 60% of voters in a survey by commissioned by Christian Think Tax, Theos (Press Association, 2014: URL). A healthy media would stand up to the powerful and wealthy to change the myths and prejudices (Jones, 2014) and protect the vulnerable as the modern welfare state intended.

Jones, O (2014). ‘Benefits Street: A Healthy media would stand up to the powerful and wealthy. Ours targets the poor and voiceless’, available at http://www.independent.co.uk/voices/comment/benefits-street-a-healthy-media-would-stand-up-to-the-powerful-and-wealthy-ours-targets-the-poor-and-voiceless-9046773.html [accessed 12 January 2014].

Jones, O (2014). ‘Owen Jones: My latest battle to stop the demonisation of people on benefits’, available at http://www.independent.co.uk/voices/comment/owen-jones-my-latest-battle-to-stop-the-demonising-of-people-on-benefits-9136123.html [accessed 18 February 2014].

Jones, O. (2012). ‘The strange case of Shannon Matthews’, Chapter 1 in Chavs. The demonization of the working class, London and New York: Verso.

Larsen, C A and Dejgaard, T E (2013). ‘The institutional logic of images of the poor and welfare recipients: A comparative study of British, Swedish and Danish newspapers’, Journal of European Social Policy, 23(3): 287-299.

Spicker, P (2011). ’How social security works: An introduction to Benefits in Britain’. Bristol, The Polity Press.