Ever since September 26, 1984, when Communist China and Britain reached an agreement to allow mainland China to resume sovereignty over Hong Kong in 1997, “one country, two systems” has been promoted by Deng Xiaoping as a solution to the reunification problem. He suggested that within the unified People’s Republic of China, the mainland practices socialism, while the current capitalist system of Taiwan, Hong Kong and Macau will remain unchanged.

Through an in-depth analysis of the “one country, two systems”, I am going to explore these questions in this paper: what is the origin and procedure of the policy of? What are the essential features that the policy has promised? In practice, what problems have surfaced so far? How did the policy impact and change Hong Kong society?

Historically, China’s major concern regarding national reunification had not been Hong Kong but Taiwan. In fact, since Hong Kong provided an opportunity for unofficial contacts with the government of the Republic of China (ROC), the People’s Republic of China (PRC)’s policy had been to keep Hong Kong as it was until the Taiwan issue was resolved. The concept of “one country, two systems” emerged in the Third Plenary Session of the 11th Central Committees on December 15, 1978. While speaking about the work related to Taiwan, Deng Xiaoping proposed a third round of Kuomintang-CPC cooperation to bring about reunification of the country (Qing). According to him, Taiwan’s socio-economic system, lifestyle and foreign investment will remain unchanged and its army will become local armed forces. After that, in an interview with a Xinhua correspondent on September 30, 1981, Ye Jianying, the chairman of National People’s Congress, elaborated on the policy more specifically. He proposed nine guarantees, including the idea that Taiwan could be a special administrative zone after reunification, maintaining its own army and enjoying a high degree of autonomy, with “three no-changes” guaranteed for Taiwan (Wei).

Pressed by Britain to make a decision on Hong Kong, China reversed its priorities. The PRC government decided to reunite with Hong Kong first and used it as an experiment for the policy; if it was successful, Taiwan would be attracted. In a meeting with British Prime Minister Margaret Thatcher in September 1982, Deng publicly presented the “one country, two systems” concept and considered it to be applicable to Hong Kong (Ching 7). As such, the full elaboration of the concept took place during the Sino-British negotiations on the constitutional status of the British colony of Hong Kong after 1997.

2. Procedure: Promises of the Communist Party of China (CPC)

The Sino-British Joint Declaration was signed by the PRC and the United Kingdom on December 19, 1984 in Beijing. In the Joint Declaration, the Chinese government stated that it had decided to resume the exercise of sovereignty over Hong Kong with effect from 1 July 1997 and the United Kingdom government declared that it would restore Hong Kong to the PRC with effect from 1 July 1997 (Wei). A new special administrative region (SAR) government based on the Basic Law is established, and the scheme of “one country, two systems” became a reality.

By looking at the three branches of the government of Hong Kong, we can see that the CPC has successfully contained Hong Kong. In the executive branch, the Chief Executive and principal officials of HKSAR government are indirectly appointed by CPC, though nominally the chief executive is elected by a selection committee of 1200 people. In the Legislative Council of Hong Kong, only a half seats were popularly elected, with the other half directly appointed by CPC. In the judicial branch, CPC has tamed the Court of Final Appeal with the reinterpretation of the National People’s Congress (NPC). According to Yuen’s discussion of NPC’s interpretative power over the Basic Law, there is no residual power on the part of Hong Kong to define or interpret any points not clearly stipulated by the Basic Law.

The reason why these problems surfaced when the policy was put into use is the controversial and uneven nature of the “one country, two systems”. First, it proposes to have a capitalist local system operating under the administration of a communist central government. According to Chien-Min Chao, “Peking has stated that the dialectical principle of the unity of contradictions is the basic and most important objective theoretical source of ‘one country, two systems’” (110); however, the CPC neglected, or chose to neglect the predictable outcome of the policy at this point. Second, the policy is uneven because the two systems are unequal in size and status. Thus, it is predestined for Hong Kong to be overwhelmed by China in the normal course of development.

Now after seventeen years, people may ask whether the implementation of “one country, two systems” has been successful. Proved by the outcomes, the “one country, two systems” has certainly brought a number of changes to Hong Kong society, which might seem prosperous to the CPC but disastrous to Hong Kong people. Applying the “three-layer model” to analyze the social changes, we can clearly see another inefficient part of the policy. It is suggested by the model that the society can be divided into three layers from outside to inside: instrument, institution and cultural core. In the case of the “one country, two systems”, the policy apparently brought instrumental and institutional changes to Hong Kong society but the core value has never been changed. Afraid of being assimilated, Hong Kong society felt a need to maintain its distinctiveness from the rest of China. For example, when the HKSAR government decided to change the teaching language of all public secondary schools from English to Chinese after two months of reunification, Hong Kong society reacted strongly against the this decision. Chan illustrates their reason as “the English language is a habitus of Hong Kong people, and distinguishes them from their mainland counterparts. To maintain this distinction, Hongkongers fought to retain their right to learn in English” (282).

Furthermore, Hong Kong people’s strong self-identity is reflected from the survey data and their attitude to mainland Chinese. Figure 1 shows that more than 50% people identified themselves as “only Hong Konger” from 1990 to 2012. Notably, the lines of “only Chinese” and “only Hong Konger” are getting closer to each other. It is not sufficient to prove the growing identity of “only Chinese” in Hong Kong society, but it shows the immigration wave from mainland to Hong Kong due to the relaxed policy. Hong Kong people always show an angry regionalism toward this kind of issue. When they see any unciviled behavior of Chinese, they will insult them with remarks as “Chinese dog go back to your kennel”. Sadly, because Hong Kong is now legally an undeniable part of China, no matter how strong their self identity is, Hong Kong people are unable to speak out their own voice on the world stage. 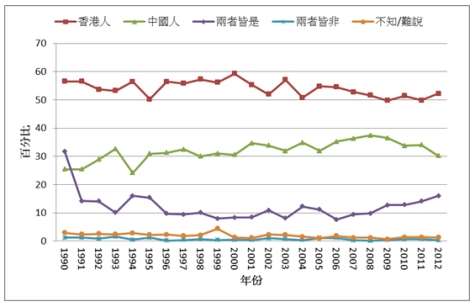 In short, the policy of “one country, two systems” has been adopted by the CPC to resolve the reunification problem of Hong Kong. The policy has worked for the purpose of recovering Hong Kong from the British. Yet, since the CPC fails to realize most of their promises, a number of practical problems originated from the policy are still needed to be solved. As a city that prides itself on freedom, the rule of law and low corruption, Hong Kong now faces a difficult road ahead. The feeble state of democracy in Hong Kong is only one part of a grim picture. As Hong Kong increasingly begins to resemble just another mainland city, it seems a destiny for Hong Kong to become a global backwater.